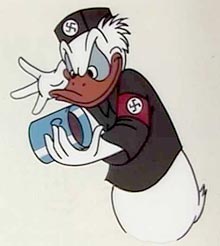 Just when we feared we’d have to start working for our material, Paul Broun, House Republican from Georgia, serves it up on a platter:

“You have to remember that Adolf Hitler was elected in a democratic Germany. I’m not comparing him to Adolf Hitler. What I’m saying is there is the potential of going down that road.”

Yes, yes, oh god, yes! It’s only been a week, and we didn’t realize how empty our life felt. Where are the terrorists of yesterday? Whither the socialists? Where have you gone, Michele Bachmann?

Every word is precious when so few can be found, so let’s indulge:

“It may sound a bit crazy and off base, but the thing is, he’s the one who proposed this national security force… I’m just trying to bring attention to the fact that we may — may not, I hope not — but we may have a problem with that type of philosophy of radical socialism or Marxism.”

“That’s exactly what Hitler did in Nazi Germany and it’s exactly what the Soviet Union did… When he’s proposing to have a national security force that’s answering to him, that is as strong as the U.S. military, he’s showing me signs of being Marxist.”

Our only regret is that our new BFF Paul didn’t squeeze in the Mark of the Beast, but the day is young.

So what tripped his wire? Apparently Barry proposed back in July that the U.S. create a “civilian national security force” that would manage postwar reconstruction instead of the military. It was so tame, even Shrub endorsed it.

nojo
7:00 am • Tuesday • November 11, 2008
comment »
Choose Your Delusion
One at a Time, Please Your Tax Dollars At Work
25 Comments
ManchuCandidate

Um yeah. Versus the awesomest democrazy (sic) ever these past 8 years.

Wait till they start bitching about the lack of civil rights, the suspension of habeus corpus and the unitary executive. That’s what makes these group of Repukes so predictable and loathsome.

It’s only when Black Socialist Eagle and his gang of black mullah racists intellectuals are in charge when they realize there might be a problem with too much power concentrated in the executive branch.

Broun may have something there. You know, I just wanna run into the street and start screaming Sieg Heil!

@ManchuCandidate: It is nice that Obama, the candidate of reason and balance, finally won but it is disconcerting that the president has become such a big deal here. It feels oddly third world. The whole idea of a tripartite government was to distribute power and keep things from moving to extremes. The real test of Barry as curator of democracy will be his willingness to forego and indeed contest and dismantle the prerogatives of the unitary executive.

harshing the buzz started already, and you’re surprised?
i’ve been waiting for it. 49% of americans are scared to death of our marxist, socialist, muslim anti-christ, mocha president.
you won’t have to dig too deep, america, land of 1/2 idiots.
i remember that if i get too hopeful(tm). only a small smattering of the less idiotic was represented in the general.

btw, the world isn’t quite as stupid. was watching Hope with evilmammy yesterday, and i turned to see quiet tears streaming down her face,
this haitian woman and citizen of turks and caicos. i cried with her.
globally, barry has bought the world a coke.

@FlyingChainSaw:
Agreed. Barry will have to dismantle the Uber Executive and not be tempted to use it on the pigfuckers. If he can “forgive” Joe Lie then he might (I am not as big a person as Barry because I’d be more inclined to bitchslap ole Joe.)

@rptrcub:
Extra douchey. As if going to an ancient land, seeing exotic cultures, meeting people and killing them wasn’t bad enough for the souls of soldiers.

Seriously, if one believes that people having sex is evil then you are definitely fucked up in the worst kind of way.

@baked:
Let’s hope that he uses it instead of the W squandering.

@baked, et al: Remember what the NYT’s county by county electoral map looked like. Obama swims in a sea of blue. http://elections.nytimes.com/2008/results/president/map.html

@FlyingChainSaw: When my congressional candidate was looking for an initiative before the primaries, I told him we ought to move toward a freeing Congress from having to be in Washington by using the webz to permit members to vote and attend hearings from their home districts.

Benefits: disperses Congress in the event of disaster; keeps members close to their districts, reduces time lost due to travel; reduces exposure to lobbyists.

Seriously, if one believes that people having sex is evil then you are definitely [Joe Scarboroughed] up in the worst kind of way.

And to that point, ManchuCandidate, it has to be said, because it is worth repeating:

Thank you for your time.

@ManchuCandidate: I don’t think he will do anything to set them off as he knows they are wired to scream about oppression at any opportunity. This is a really nasty habit that the GOP picked up from the snakehanders in pursuit of the Southern Strategy – the posture of the oppressed minority. All evangelical churches strike this pose to effect an us-versus-the-deceived-world esprit de corps.

@FlyingChainSaw: The GOP has boxed themselves in now as a regional party. They will lose the west entirely if they are not careful and continue to pander to the dumbfucks down here. I honestly want Atlanta to secede from the rest of Georgia. Another blue state with about 4 m people in the metro.

@redmanlaw: I’d say, at a minimum, they could halve their time committed to DC right away. The logistics are undeniable for most any enterprise. Even IBM, albeit post-Gerstner, threw themselves into the distributed model to an extent even some of the younger workers found it extreme. You’re right. The lobbyists would go insane having to chase down committee chairs and members all over the US. The side-effects would be interesting. What would these jamokes do with most of their time actually spent in their districts?

@FlyingChainSaw: A high level state politico I know won’t run for Congress because of all the travel required. Perhaps I’ll pass my idea to a fellow ex-Deaniac who managed a winning congressional campaign this fall.

The ideal image would be running into the member pushing a cart at the grocery store or at the Wal-Mart.

Georgia: Pioneers in Ass Stupid Since 1732

@redmanlaw: Actually, the way the distributed enterprise model is usually sold to companies – really, it’s always an internal initiative – is through a use-case that shows the new efficiencies and opportunities gained and honestly addresses benefits lost, new liabilities assumed and remediating costs thereof, etc. Transitioning enterprises to a distributed model is a stock consulting practice center for a lot of big consulting outfits these days, so there is probably a good deal of available literature in the industrial sector that could inform serious thinking about applying a little electronic and logistical surfactant to Washington. You could probably string some of the Big Four along for a little while for information and sense of how comparable enterprise and government are in terms of applying the distributed model.

@Tommmcatt Yet Again: That’s 1733 to you, Mr. ‘Catt. Lucky colony #13. A debtor’s colony was the intent, but Gen. Oglethorpe apparently brought teh Stupid (though we’ve had many newcomers from everywhere else who have brought it down here).

I am, of course, being tounge-in-cheek. Georgia was home or birthplace to many illustrious thinkers, polititians, artists and personalities such as the indomitable Rptrcub, Martin Luther King Jr., Nipsy Russel, Oliver Hardy, Jackie Robinson, DeForest Kelley, Jasper Johns, Amy Grant, Gladys Knight, James Dickey, Conrad Aiken, Otis Redding, Joanne Woodward, Joel Chandler Harris, and Hulk Hogan. Also, it was the only southern state that started out with laws against slavery at its’ founding.

At least that is what the Google tells me…

@Tommmcatt Yet Again: It was, indeed. Oglethorpe didn’t like it. But that was only during the 30-year-or-so “trusteeship” (think: colony with a private board of directors) during the founding. After the guvmint of King George II/III took over, slavery became widespread.

Also, don’t forget Jimmy Carter (even though people hated him as a prezzie, he is respected for his work in democracy although people got pissed off at Peace Not Apartheid) and Ivan Allen Jr., mayor of ATL who got the city through the 60s without race riots, and actually was progressive in the subject.

Oh, and Pogo: “We have met the enemy and he is us.” In an Earth Day cartoon, no less.

POGO! How I lurves that strip!!!!! Walt Kelly is the man.

@Tommmcatt Yet Again: Also, opinion: Jesus and the Devil making out on a Mommy 1.0 post at the Jez about how gay panic is overtaking abortion obsessions. Opinions?

I am so down for the freaky hawt….and it doesn’t get much freaky hotter than that!

@Tommmcatt Yet Again: Deforest Kelly, you say? And here I thought the only thing Georgia had to be proud of was Coca-Cola. But hey, all I know about the south I learned from HL Mencken. The Sahara of the Bozart.

@Prommie: Don’t forget all our recipes for everything basted, marinated or topped with Co-Cola.