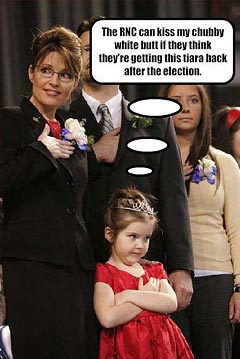 So, about that Talibunny Couture Kerfluffle — it may have been even worse than reported. At least while Psychogeezer’s lieutenants have something to say off the record about it.

The instructions for Sarah Palin were to “buy three suits for the convention and hire a stylist”. But like the adorable maverick she is, Palin didn’t purchase the clothes they wanted her to buy, but went straight to Nieman and Saks and let them know her credit line:

One aide estimated that she spent “tens of thousands” more than the reported $150,000, and that $20,000 to $40,000 went to buy clothes for her husband. Some articles of clothing have apparently been lost. An angry aide characterized the shopping spree as “Wasilla hillbillies looting Neiman Marcus from coast to coast,” and said the truth will eventually come out when the Republican Party audits its books.

Fun factoid: The story came out within six hours of McCain’s concession speech. We’ve been expecting the Long Knives, but this amounts to swashbuckling.

(Post of mine at the other place.)
Come and listen to a story about a dude named Todd
A rich snowmobiler, barely kept his ass clothed,
Then one day wife was shootin at some moose,
And up through the ground came a really old dude.

Well the first thing you know ol Todd’s a celebrity,
Retards said “Sarah, Drill Baby Drill”
Said “Neuman Marcus is the place you ought to shop”
So they loaded up the dog sled and joined mad John.

McCain, that is. Seven Houses, Candidate.

Well now its time to say good by to Todd and all his louts.
And they would like to thank Repubs fer kindly paying out.
They might be invited back to drill at this locality
To take a heapin helpin of Repub’s hospitality

Talibunny that is. Set a spell, Take your pay off.

This stuff, like Palin’s plane, will all eventually wind up on Ebay, where the RNC is welcome to bid for it.

Eh, can’t blame the bitch. If I could get access to some RNC money I would turn into a retail whore. Just send the bill to Mike Duncan and Carly Fiorina!

Best part of that article, though, had nothing to do with the clothes, but was this gem:

Palin asked to speak along with McCain at his Arizona concession speech Tuesday night, but campaign strategist Steve Schmidt vetoed the request.

Damn, that article is a fountain of goodness. Like this:

McCain himself rarely spoke to Palin during the campaign, and aides kept him in the dark about the details of her spending on clothes because they were sure he would be offended. Palin asked to speak along with McCain at his Arizona concession speech Tuesday night, but campaign strategist Steve Schmidt vetoed the request.

I love the bit at the end with Obama’s internal reply to Williams’s stupid debate question, especially because I want to think the Unicorn lets the f-bomb fly infrequently but very effectively.

@homofascist: … kept him in the dark about the details of her spending on clothes because they were sure he would be offended– which might of course lead to him calling her a cunt.

@flippin eck: Yes, I liked the Unicorn’s f-bomb, and don’t want to think about the first bullet point about the Secret Service.

I wonder what Psychogeezer would do if he knew about Todd stuffing roast chickens into his waistband at campaign fundraisers. . .

And from the Guardian via the Daily Beast:

McCain: “Palin More Trouble Than a Pitbull”
A memo from Sir Nigel Sheinwald, the British ambassador in Washington, to Gordon Brown leaked to The Guardian reveals the full extent of the behind the scenes tensions between McCain and Palin. According to a “military friend” of McCain, he has been joking to friends, “What is the difference between Sarah Palin and a pitbull? The canine eventually lets go.” Sheinwald described Obama to Brown as a “decidedly liberal” man who “got diverted by his presidential ambitions.”

Hey, if you really want to see how things have shifted in terms of national voting trends the state-wise map doesn’t really do justice to the change we’re witnessed.

This county-wise map shows how far voting trended to Democrats this time around.

@FlyingChainSaw: Really shows up that Heartland of Stupidity.

@Mistress Cynica: Or a place where people have been living in cars and eating road kill for so long, they can’t give a shit any more.

Ahhh, this gives me some delicious schadenfreude-y Happy when I dearly need it.

Nojo, I love the words you put in Piper’s mouth. And I hope she gets to keep the tiara, too.

@lynnlightfoot: Little Piper in her tiara was my very first avatar over on brand W, back when no one knew who she was.

@lynnlightfoot: That was Pundit Kitchen, not me, and our new friend becominginvisible brought it to my attention.

I myself love when my enemies start eating each other. And never forget, McCain’ss campaign was made up of Rove men, and they know how to smear better than anyone who ever lived, I so look forward to more. And even though though they are congenital liars, I think she gave them plenty of real ammunition, its so in keeping with the reports of her actions as governor, that she would go on a shopping spree for the whole family.

Did you see that they remain a little bit loyal to McCain? Have they some decency, at long last? This little bit may be some unintentional honesty, among themselves, honor and a lack of viciousness are faults, they probably think they are throwing him under the bus, too, by accusing him of vestigial decency that kept them from throwing even more, and stinkier, shit, they might be clueless that outside their little club of evil, this is actually praise. I don’t buy the remark that he was shocked by the vicious pigfuckers who came out for Palin, though, I saw his face when ugly shouts broke out in his events, he never looked the least bothered.

So, do you think she will give Stevens’ seat to Todd, or her redneck high school dropout son-in-law? Nah, she will take it herself, and give them jobs, I am sure.

The saddest thing of all is that the proposal to name SF’s sewage treatment plant after GW Bush failed. How could that happen?

@FlyingChainSaw:
stuffing roast chickens down his pants…..HAHAHA
what would mcain do? call him a cunt, of course!

I’m reading posts ass-backwards, but when I read the times on-line with my corn flakes I also thought “hillbillies on a shopping spree”. And I too hope Piper keeps the tiara; she’ll be so screwed up by the age of 15 that she may need to pawn it to cover her meth habit.

@SanFranLefty: I predicted that Talibunny would go rogue and pre-empt Geezer’s concession. And the Times story this morning indicated that in fact was what she was planning, not a “joint statement”.

I hope we have the Clampetts to kick around for a long time.