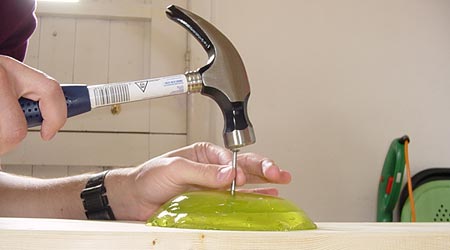 Nailing jelly to a wall: is it possible?

My friends, that jello isn’t going to nail itself to the wall, nor are those rats going to fuck themselves.

Speaking of which, it seems to me that there aren’t that many 527 ads unlike say 2004. Could be just old Canada City me.

Where’s the vaunted Repub money machine? A friend of mine forwarded me a spam that Townhall sent it’s members begging them to send money to the Repubs for the election. Which is even more laughable considering that demographic studies show that RWers on average are poorer and less educated than the average LWer. The only reason the RW’s have money is that wealth is concentrated within a few.

An article (I don’t remember where) mentioned that the Repub money and noise machines (aka RW “think” tanks/pundits) were heavily dependent on real estate bucks, legacy dough and Wall St moola. None of that will be available for the near future for some reason. This may be the only good outcome of economic devastation.

RW boogie man backer Dick Mellon Scaife’s annual income (from articles on his divorce) was approx $150 million. All of which came from his trust fund. The Pitts paper he runs loses somewhere in the neighborhood of $20 mil a year. Plus if he loses even a 1/5 of his income to his wife and the credit bomb takes say another 1/5. He’s already down to a mere $90 mil. Knowing the RW mantra for pulling themselves up by their boots, he’s going to save his money for himself. Means reduced money for RW tanks or for that Pitts paper. Awwww.

The recent demise of the NY Sun. Awwwwwwww. No big pockets RWer had the bucks to save it. Awwwwwww.

Wachovia. And so on and so forth.

I’m not saying the ‘tanks and noise machine will go away, but their numbers and effectiveness will be greatly reduced for a while as their moneybags are too busy saving themselves. I’m guessing that the folks who gave Rush $400 mil and Insanity $100 mil contracts are regretting it right now.

And now: the Fed cuts the rate a half-point. And thus the banks get themselves a nice big rock to put in their disused crack pipe. Let’s see what this does.

@chicago bureau: Why am I feeling so, so Japanese?

@FlyingChainSaw: No sex, no drugs, no wine, no women, no fun, no sin, no you, no wonder it’s dark.

WTF happened to Teh Vapors?

@blogenfreude: Broke up in ’81. Frontman became a British solicitor; one of them became a TV director for the Beeb.

@blogenfreude: First thing that popped in to my head.

Could we get Mythbusters on the jelly thing? They already did fish in a barrel.

Now that is some dedication right there…

@FlyingChainSaw: Because the US economy has become Japan’s in 1990? (PS: They haven’t recovered yet)

That really gives me the shivers. You hear absolutely HORRIBLE things about Japan- men killing themselves for life insurance for the family, for example, because they get fired, or teenagers boarding themselves in their rooms and cutting themselves off from the world completely because they believe they have no hope for a future.

Thanks George! Thanks Alan! Thanks Benny! Thanks Hank! Heckuva Job, all of you!

@Tommmcatt Yet Again: Indeed. And what does America have to turn to in these difficult times that Japan didn’t? Evangelical Christianity and a whole hell of a lot more guns! Whee!

When the going gets tough, the tough go fishing.

Pulled four pan-sized brown trout out of the Pecos River today on dry flies after I was done tromping around the slopes there with a client looking for survey markers and getting the lay of the land for a sacred lands recovery operation.

@Tommmcatt Yet Again: I assume you saw the article in the LA Times about the man who killed himself and his entire family because of economic woes ( and being crazy obvs).

@Tommmcatt Yet Again: It’s horrifying. And I’m afraid we’ll see more like it. Hell, I made the mistake of looking at my “investment” account today and almost slit my wrists.

Yeah, I can’t deal with it either. I knew I should have blown all that 401k money on XTC and circuit parties instead of prudently socking it away every week, and now I am paying for it.

@Mistress Cynica: Yeah, I just got my quarterly statement for my retirement account. I actually lost more than I invested in the last quarter. Oof. Can’t wait to be saying “Do you want fries with that?” in Cantonese to my overlords in 2047.

@SanFranLefty: I have a 403(b) from my old job and haven’t rolled it over under the new one. It’s only supplemental to the defined-benefit pension I have and have kept from the old job (universities are wonderful like that), but I haven’t even investigated moving what 3 pennies which are left in it over to the new place.

my favorite story of the week was the lehman ceo who got punched out cold while he was on a treadmill.
instead of slitting our wrists, lets target these guys and beat the shit out of them. that guy who cold cocked him is The Hero of My Week.