That’s Some Catch, That Catch-22 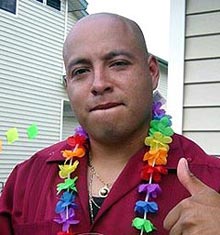 Speaking of war heroes, let’s take a moment to honor the late Sgt. Rafael Peralta, a Marine from our corner of the country who smothered a grenade with his body in Fallujah, saving the lives of his fellow troops.

President Bush himself honored Sgt. Peralta in a 2005 Memorial Day speech, saying he “understood that America faces dangerous enemies, and he knew the sacrifices required to defeat them.”

One sacrifice he didn’t know: Four years after his death, Sgt. Peralta would be denied the Medal of Honor because he was crazy.

For about, let’s say, ten seconds.

It didn’t start that way. Sgt. Peralta’s actions were commended by his fellow Marines. The Marine Corps and Navy agreed, nominating him posthumously for their highest honor. But a special review panel appointed by Defense Secretary Robert Gates “said a medical specialist concluded that Peralta, who had been shot in the head before witnesses say he reached for the grenade, was too incapacitated to have consciously carried out that act,” according to a local paper.

Shot in the head by a fellow Marine, we should add. Ricochet.

“I think it’s all because of the friendly fire part of it,” says a lawyer for Sgt. Peralta’s family.

Sgt. Peralta, who is buried about ten miles from where we sit, was instead awarded the Navy Cross on September 18. He was born in Mexico City, emigrated with his family to the United States at age 15, enlisted in the Corps the day he received his green card, and became a U.S. citizen while serving. “Be proud of me, bro,” he wrote his younger brother before the Fallujah assault, “and be proud of being an American.”

Those last details come courtesy of Ollie North, who exploited Sgt. Peralta’s bravery in a 2004 column bashing the media for ignoring it. “The next time you log onto the Internet,” said Ollie, “do a Google search on Rafael Peralta.” We did. Of the 700 news articles covering the latest development, North’s name cannot be found among them.

What happened to letting him die a hero?

Would this happen to a flag officer? I somehow doubt it. Rank has its privileges.

There are two MOHs off the top of my head that I can think of that should be handed back under the same criteria.

One belonging to Adm Issac Kidd who died on the Arizona at Pearl Harbor. What did he do to earn it? He watched a Japanese 2000lb bomb penetrate the armored decks of the USS Arizona and then was disintegrated when the Arizona blew up. Why did he get it? He was Navy Royalty and the first US Navy flag officer to die in combat in WW2.

The other belongs to Adm Daniel Callahan. He led the US task force at Guadalcanal on Nov 13 1942. He made poor tactical decisions that made a bad situation worse (a desk jockey for two years) instead of letting the more experienced junior admiral take tactical command–5 US cruisers and 8 destroyers vs 2 Japanese Battleships and 13 destroyers. He was among the first to die in the battle and THUS PLAYED NO FURTHER PART IN which the US Navy ultimately won at a heavy cost (in spite of his poor decisions at the beginning of the battle.) Yet they gave him an MOH because, you guessed it, he was an admiral.

Last night’s Mad Men seemed to be a less than subtle shot at the mental viability of one John Sidney McCain III. It did not help that the actor looked a lot like him.

Why do we expect anything less from chickenhawks? They are the true traitors, and under my dictatorship, they will have their genitals fried before summary execution.

This story is too appalling in too many ways. I have to shower and return to more important things. Like – you guessed it – musical theatre.

In the “We are truly Fucked” category:

Our former overlord Megan is now an editor at Jez.

Here is a handy-dandy Hobo Name Generator that we can all use to find out our Hobo names: http://www.oregonlive.com/edge/index.ssf?/edge/2007/20070226.frame

Note: its a fucking manual hobo name generator, you actually have to work out the answer like on paper and shit, what the fuck? I guess thats appropriate, we might not have wifi in all of the jungles, huh?

The names were taken from “The Areas of my Expertise, ” a book which anyone who has not read must do now. I think that from a grammarian’s standpoint, that last sentence is what is now called a “palin construction.” Used to be called a “Kerry.”

Even better, apparently, the entire catalogue of 800 hobo names compiled by John Hedgecomb is available, and illustrated, here: http://e-hobo.com/

Save time, the master list of hobo names is here: http://e-hobo.com/hoboes/list/ It is delightful, full of gems.

Knowledge of matters hobo will soon become a valuable commodity, I think.

@ManchuCandidate: For now. She should be stocking up on rice, beans and wine for the inevitable axe.