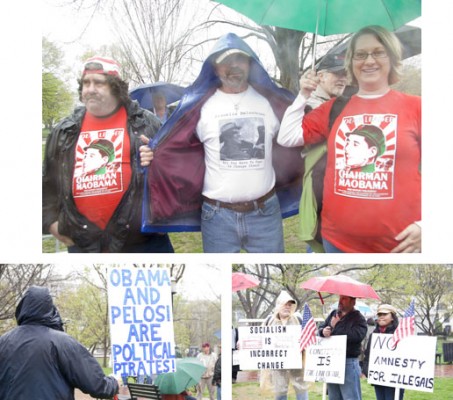 I wonder how they will pack so much FAIL into 24 hours?

WASHINGTON, D.C. – The protest organizers were struggling to get the event together. They had originally planned to unload a rented truck filled with a million tea bags into [Lafayette Park], but were stopped by officials because they didn’t have a permit. A woman in charge of the protest announced that the right-wing Competitive Enterprise Institute had generously agreed to display the tea bags at its headquarters a few blocks away. She also said that there were originally supposed to be two stages with events, but the metropolitan police had blocked them from putting a stage on the sidewalk. A woman standing next to me leaned over and said, “That’s big government for you!”

And check out these patriots:

A local think tank, the Competitive Enterprise Institute, said it would allow the dumping of the tea bags in its 12th floor conference room instead. Not quite the same impact, though.

What else could go wrong? Another protest that was planned for the Treasury Department was also scrapped due to permit issues.

How much sillier can it get? Columbia, SC:

Stay tuned. They will bring more stupid, and we will find it for you.