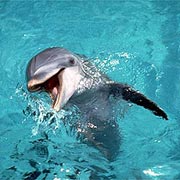 What’s that, Flipper? You say the presidential candidates are debating at a church? Only it’s not really a debate, more like dueling interviews, and not really a church, more like a Mall of Christ?

Or are you bitching about the headline? Dolphins, porpoises, nobody gives a flying backflip about your evolutionary turf wars, and you all taste the same to my friend Shamu across the I-8.

7:43: It’s actually 4:43 in Sandy Eggo, but we’ll try to transpose the hours, at least through the first couple of beers.

7:48: CNN’s chattering about some JeezusFest in D.C. — anti-abortion, anti-gay-marriage, yadda yadda. Note to self: Find the place in the Sermon on the Mount where Jesus says “Blessed Are the Cretins”.

7:54: CNN talking head: “A lot of people do get their information from the Internet, and they’re cynical.” Drink!

8:27: Barry does a soft-shoe around abortion, comes up with “civil unions” for gay marriage, yadda yadda about stem cells. Whatever happened to Liberation Theology?

8:32: Given the opportunity to knock off a Justice, Barry picks off Thomas first, then Scalia. Thomas may be “incompetent”, but isn’t that better than if he knew what he was doing?

8:41: So here’s the news: Pastor Rick is asking better questions than most network anchors. He actually drove through the hot buttons rather quickly, almost apologetically, and the lack of high-five gotchas is a nice change. We can almost forgive him for the goatee.

8:57: Barry’s done, no howlers. What a disappointment. Bring it on, Geezer, we need to drink.

9:02: And Geezer opens with a shout-out to Petraeus. Game ON!

9:04: Greatest moral failure? “The failure of my first marriage.” No details, but give him credit.

9:08: Offshore drilling! DJ Geez is picking ’em up and laying ’em down!

9:09: Nukes! Oh sweet Jesus, the crowd is about to spontaneously rapture! GEE-zer! GEE-zer!

9:11: POW! Dude, even Cher saves something for the encore.

9:24: Is it just us, or did Geezer just put his stump speech on shuffle?

9:29: And we thought Reagan governed by index card. Geezer plans to govern by bumper sticker.

9:33: Typical example of wasteful spending: $3 million on bear DNA. Um, what about the trillion in Iraq?

9:37: McCain feels strongly about your Constitutional rights. But it seems he can’t count to Four.

9:39: In case it’s not yet apparent: Barry tried to engage the questions (within political limits, of course), while Geezer just twists them into a talking point. Why do we suspect McCain will get the credit for a “strong performance”?

9:44: Hey, fundies: “Georgia was one of the earliest Christian nations.” Well, that cuts through the complexities.

9:53: And… scene! Now on to CNN, so they can tell us how they watched a different event entirely.