TRUMPLIGULA! Will End Up in a Wedding Dress, Chained to a Pipe in the Shower In Any One of Two or Three Prison Systems. Which One(s) Is the Only Question Left 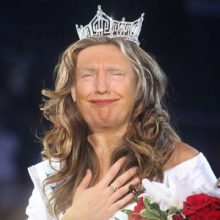 Anyone who watches banks can see the only way Trump can go to jail is for his operational role in moving cash for organized crime rings working out of Russia and the former Soviet republics.

Structuring the movement of money for organized crime in the employ of state-controlled actors who are historical adversaries of the USA!,
however is another matter.

Trump’s failed casino, the Taj, was venue for documented money laundering that resulted in settlements in 1998 and 2015.

Trump’s last source of financing, Deutsche Bank, has been bagged and fined by governments in the UK, USA! and New York State to the tune of just north of $11 billion so far that we can see on the public record.

Alone among real banks, Deutsche Bank has financed Trump’s ‘development projects’ to the tune of hundreds of millions of dollars, obviously to create a cash movement nexus to book the ‘repayment’ of loans and account for proceeds.

And this month, in an interview that no first parties are disputing this observation from Trump’s former field marshall Steve Bannon in Michael Wolff’s Fire and Fury:

‘Bannon has criticised Trump’s decision to fire Comey. In Wolff’s book, obtained by the Guardian ahead of publication from a bookseller in New England, he suggests White House hopes for a quick end to the Mueller investigation are gravely misplaced.

“You realise where this is going,” he is quoted as saying. “This is all about money laundering. Mueller chose [senior prosecutor Andrew] Weissmann first and he is a money-laundering guy. Their path to fucking Trump goes right through Paul Manafort, Don Jr and Jared Kushner … It’s as plain as a hair on your face.”

Last month it was reported that federal prosecutors had subpoenaed records from Deutsche Bank, the German financial institution that has lent hundreds of millions of dollars to the Kushner property empire. Bannon continues: “It goes through Deutsche Bank and all the Kushner shit. The Kushner shit is greasy. They’re going to go right through that. They’re going to roll those two guys up and say play me or trade me.”

Given the reporting that’s come out of the US trade presses and European media over the decades, it’s been clear for a long time that Trump is just one of a number of mechanisms by which Russian oligarchs have been looting Russia and other former Soviet republics.

Bankers operating at a certain altitude watching the campaign understood that the Trump presidency is in large part a side effect of the gravity attendant 80 billion dollars that the Russian oligarchy needed to land in the legitimate economy.

Mueller’s case will delineate that and make that case here in the US.

The only question that remains is if Trump will face charges and extradition in the UK and Europe.

On the face of it, it’s even money Trump will end up facing formal charges and doing time in the UK and/or EU.

What odds do you give it?

I’d say there’s a 100% likelihood that Mueller will find a shocking number of financial crimes committed by Tdumbp, his disgusting family, and his nefarious associates, followed by a collective shrug and even defense from the Republinazi party. I mean, it’s hard not to find evidence of munnie laundering when it’s all out in the open after being perpetrated by scumbags who’re even more stupid than amoral.

He should have stayed with the local connected guys who bust kneecaps. What a fucking fool. What a foolish country that elected this idiot. When is this nightmare going to end?

Can they fucking arrest him now? We have mens rea. We have actus reus. We have him!

@JNOV: They won’t arrest him. Mueller will bundle up a report for the House, where it will die. Maybe we’ll get a day or two of chatter out of it.

And have JNOV write up friend of the prosecutor memos for the 50 state AGs to separately indict TRUMPLIGULA! for whatever fits, according to JNOV.

@FlyingChainSaw: Sign me up for my pro bono legal services. Good to see you post again, my friend. LMK next time you’re in Ess Eff land, I owe you a drink.

@FlyingChainSaw: Ha! I have zero skills. SanFranLefty is the one!

Is Devin Nunes soft in the head? I have a serious case of hate for that asshole.

@JNOV: Nah, he’s just a slimy weasel. You don’t feel hate for someone who’s soft in the head, you feel pity.

Right. RSA Conference week is coming up in April. Will be there this year. Last year I was stuck out at a gig in Vienna.

@FlyingChainSaw: What, is Vienna no fun? Planning to go back to Germany this fall with a side trip to Austria. Travel tips are welcome!

@mellbell: Here are 7 German words that perfectly capture the horror of living in Trump’s America

Fuchsteufelswild sums it up for me.

@¡Andrew!: That literally means “fox devil mad,” but apparently it translates to “hopping mad,” so yeah.