Meme of the 21st Century: 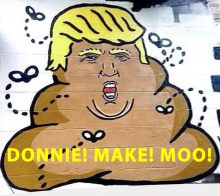 Nuke alarms, presidents shrieking SIEG! HEIL! in rallies and in the loo, executive compensation running in excess of the GDP of most developed countries, the nation’s elections and president controlled by a fleabag, failed empire’s racketeer-in-chief, the complete shithouse of the AMERICA!n experience in the late 20th and early 21st Century can be wrapped up in one quick declarative assertion within the capacity of the current president to articulate:

And apparently you can spend a lifetime gorging on the four food groups of McDonalds, KFC, Pizza Hut, and Diet Coke, all the while refusing to exercise, becoming morbidly obese, and still be declared in “excellent health.”

That Tdumbp University medical degree is really paying off for that quack.