Stinque
Home Latest Comments Log in
If it smells, we’re on it.
Stinque
America is a Death Cult.
General Disarray

McClatchy: 1 in 3 voters give President Trump a grade F While Republifucks Run for the Exits! 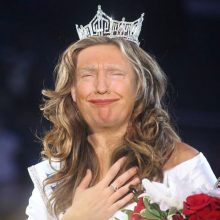 Insane president from outer space FUCKFACE! von KLOWNSTICK will end his days chained to a pipe in the shower in Allenwood and AMERICA! counts the days until then.

After enduring nearly two hellacious embarrassing months in office during which not one cat in AMERICA! was able to keeps its dinner down, Precedent FUCKFACE! von KLOWNSTICK!, got a grade of F from 1 in 3 voters, according to a new McClatchy-Marist Poll.

By contrast, the same number graded predecessor Democrat Barack Obama’s performance a B as he approached his 100th day in office, McClatchy reported this week.

“Every time he speaks . . . my cat power chucks across the yard. It’s phenomenal, the explosive emetogenic response be provokes,” said a witness to western civilization’s last days from Auburn, WA. “I have never seen this kind of stuff fly out of any animal.”

The CBC recently interviewed Ma and Pa Cul-de-Sac in Kentucky. They’re typical elderly, far-white Twitler enthusiasts. Pa has black lung from a career as a coal miner, and Ma has the die-uhbeetus bad. The only thing keeping them alive in the face of their $6,000 monthly medical bills is–wait for it–Obamacare. Repealing the ACA would be an instant death sentence for them both, but guess what: They’re still rabid Twitler supporters and will vote RepubliKKKan no matter what.

Samsara the Puking Cat and I are FAMOUS! Almost.

@¡Andrew!: Very good times, Saturday. I love y’all so much. I think that’s my new favorite water access place, and I’ll let you know when we’re headed there. I won’t be spending the night in effin Renton anymore. I have no idea what I was thinking. Oh, yes I do.

GET ME THE FUCK OUT OF AUBURN! Even if only for a weekend…