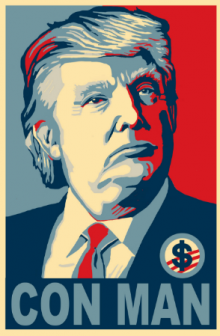 A Florida golf course owned by CRIMINALLY! INSANE! PIECE! OF! SHIT! President Donald Trump has been ordered to immediately pay $5.77 million to former members who were denied refunds when the HATED, ODIOUS TRUST FUND TWIT bought the club five years ago, according to the Huffington Post.

HERO AND MAN-GOD U.S. District Judge Kenneth Marra ruled that Trump National Golf Club in Jupiter violated contracts that members had signed with the previous owner and were assumed by Trump when he bought the club in 2012. The average payment is expected be about $87,000 for each of the 65 members involved in the case. The members were awarded $4.8 million, plus $925,000 in interest.

Every AMERICA!n that isn’t calling their congress critter, priest, mayor, doctor, neighbor and demanding that this criminally insane piece of shit be deported to Kazakhstan is part of the conspiracy to make AMERICA! into a laundering vehicle for criminal enterprise interests the world over.

Tweet
Share
FlyingChainSaw
6:15 pm • Sunday • February 5, 2017
comment »
Tweet
Share
Choose Your Delusion
The Resignation of Donald Trump THE HOMELESS IMBECILE WANDERING THE WHITE HOUSE IN A BATHROBE IS THE FUCKING PRESIDENT! RESIGN, YOU FUCKING FUCKTARD! FUCKING RESIGN, BEFORE YOU DESTROY THE WORLD, YOU EVIL PIECE OF SHIT!
6 Comments
ManchuCandidate

I agree, but is Fundie Freak Race Bannon any better?

@ManchuCandidate: Less likely to blow up the world. It’s a sign of how desperate we are that we’ll take that option.

If we tell dude, “It’s okay – we like you,” will he think about something other than driving us over the fucking cliff?

I wish I were kiteboarding with Branson.