You May Have Already Won!!! 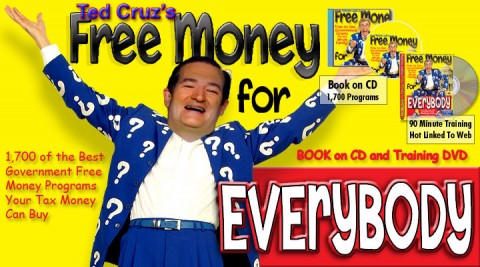 Looks like Ted Cruz is targeting the “Keep the government’s hands off my Medicare” crowd with his latest mailer which tries to entice recipients with promises of free money from the government. The Huffinton Post reports:

Sen. Ted Cruz (R-Texas) is out with a deceptive new mailer that masquerades as official government business and promises people there’s a “check enclosed” when it’s actually asking for money instead.

A New Jersey resident sent The Huffington Post the latest piece of mail he received from Cruz’s campaign. The envelope appears to have come from Cruz’s Senate office and has his name printed the same way it often is for Senate business. In small type the mailer clarifies that it is for “personal” matters and was not sent at taxpayers’ expense. It also promises a check.

The story includes the following image of the mailer:

One wonders whether Cruz will find a way to blame CNN for this one, too…

Serolf Divad
7:45 am • Tuesday • February 9, 2016
comment »
Choose Your Delusion
Careful What You Wish For Burn in hell, fuckstick.
5 Comments
ManchuCandidate

This is a real dumb idea from a guy who is full of them. Still better than the original tag line: “You May Have Already Lost.”

He’s a slippery fellow, isn’t he? Not that Clinton’s campaign tactics are much better. We’ll have quite the lowdown, dirty mudbath on our hands if they’re the nominees!

Demo debate tonight: Bernie was this close [] to calling Kissinger a war criminal. I was yelling “go there!” at the TV.

@Dodgerblue: I find myself wondering whether Hillary’s as strong a candidate as her Establishment supporters — and yes, ma’am, you’re Establishment, congratulations — make her out to be. She’s just not a good campaigner, her big pitch is competence (yay?), and without Bubba’s name and all that money, where is she?

Then again, running against Trump, all she has to do is not frighten people.

@Dodgerblue: That was so awesome.