The War Between the States of Mind 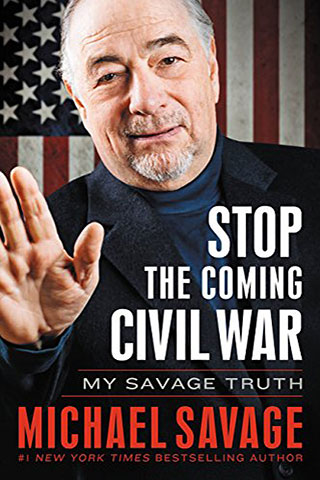 Blurb: “According to Michael Savage, OUR NATION IS IN REAL TROUBLE and the seeds of a second conflagration have been sown. Not between the states — but between true patriots who believe in our nation’s founding principles and those he believes are working every day to undermine them and change the very nature of the country.”

Review: “What makes this book great is that it doesn’t repeat Republican talking points that you would get from Wall Banger and other hacks on Fox News.”

Customers Also Bought: “The Obama Deception: The Mask Comes Off” by Alex Jones

Footnote: Funny how through all the vitriol directed at the Clintons, we don’t recall anyone using the Civil War as a hook.

Protesting deadly wars and restriction on civil liberties due to lies: traitors.

I am so sick and tired of idiots earning a living by lying … fuck him, fuck them all.

The War on Drugs is now the War on Okra. Gotta do something with those drones.

Also, Alaska’s marriage ban struck down. Oh noess. The Palins will no longer want to procreate.

But on the plus side Levi Johnson’s johnson’s up for grabs.

@Benedick: What is your handle, if I may be so bold.

And there goes the SF Bay Guardian. Although it actually went two years ago, when the founders sold it off. Just took awhile for the new owners to find a coffin.

I used to really enjoy that rag. Twenty-five yesrs ago…

@nojo: Apparently, they were in a death match with the SF Weekly that featured “seized delivery vans, murderous editors, irate blog posts, allegations of insanity, connections to the Church of Satan, illegal predatory-pricing schemes, and more than $21 million on the line.” Sounds like Wednesday on the Left Coast.

@¡Andrew!: True — but then the SFBG founders sold out to the Weekly owners a couple years ago. (Also the latest Examiner owners, speaking of SF paper wars.) Two alt-weeklies under one roof means one doesn’t last.

@nojo: The House That Hump and Savage Love Built is doing fine as far as I know. They’re benefitting from the fact that the Seattle Weekly was mismanaged into the ground, and that the Seattle P.I. is just a ghost of its former self. That leaves the right-wing Seattle “Death Tax” Times as the only other major print news media in a town that proudly advertises its 16 foot-tall statue of Lenin as a tourist attraction.

@nojo: Not to mention the decade long litigation between SFBG and SF Weekly before SF Weekly’s owner mooted the issue by buying out the Guardian.

The way the shut-down was hired left a lot to be desired. No warning, just cut off the website and escorting staffers out.

@Benedick: ?! This oughta be good. What’s your handle?

@TJ/ Jamie Sommers /TJ: I have no idea. If you find out let me know.

@¡Andrew!: Andrew, my lovely wife and I will be in your city in early Nov. Do you have my email address?

@Benedick: I’ve tried various permutations of your name but come up with zilch. Is there a topic you have tweeted about recently?

@Dodgerblue: I may be on twitter but that doesn’t mean I want anyone to find me.

I tweeted to the stinque twitter. I have no idea what that means.

@Dodgerblue: I just sent an email with all of our contact info–we’re so excited about your visit! I should warn you that early November is the height of our monsoon rainy season.