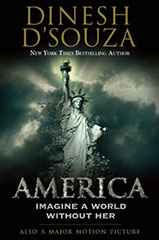 Title: “America: Imagine a World without Her”

In this book, you’ll learn:

Review: “How can such evil and misguided minds believe their own poison?”

Footnote: If reform constitutes an agenda of totalitarian control of the state over the individual, and the descendants of slaves are better off for it, what’s the problem?

America: Imagine a World without Her [Amazon]

I feel sorry for his cellmates.

Hello everyone. I have not been around these parts much of late.

But I hereby resolve to correct that grievous error. I intend to spend far less time at work, y’know, working and getting involved in the drama of idiots.

I will spend more time here amongst the snarky intelligencia.

If Dinesh doesn’t do some time, there’s something very wrong.

I guess one might think that spending years sucking up to powerful RWers and begging for money as hard work.

@TJ/ Jamie Sommers /TJ: Have I told you lately how much I love you? You might want to check previous thread and my comment re vodka. However you look at it it’s good. I’m reminded of the wedding scene in Anna Karenina when the Holy Roman Asshole gets shitfaced and does YMCA for the congregation. (That doesn’t happen.) Anyhoo. The peonies are opening and I got Festiva Maxima up the ass.

I’ve been lurqing–and I must confess that I’ve been blue. I’ve been caring for my thirteen year-old Dalmatian/best friend, Charlie, and his trip across the rainbow bridge looks like it could happen soon. Plus I’ve been applying for jobs like mad (136 so far) trying to escape from my current white collar sweatshop job with no luck and juggling the usual desperate househusband antics at home. And dodging my student loans, yeesh. It Sucks To Be Me

@¡Andrew!: Darling, the husbands will tear our hearts out. If you don’t want to stab him with the Sabatier chef’s knife you’re doing it wrong. I send you great steaming inappropriate hugs below the waist where they count. And your dog!!!! I have that here. A wetback cur who’s now 16 and tottering about going wut? Do I hear pugs? I managed to stop the husband taking a hammer to him about two months ago and he’s doing okay—the dog not the husband. You will know when it’s time. And you should trust yourself to know as he relies on you. Living with multiple dogs is very different: both they and I relate to the pack. When one of them dies I let them all see but they still mourn. Question: Does your vet come to the house when it’s time to let Charlie go? Makes a big difference. Let him be in your arms. My most beloved dog died almost two years ago. On his last day he dragged himself outside – we live in an enormous safe garden with streams and lawns surrounded by miles of forest: carry on – I lay beside him. Then when he grew a huge embolism on his leg and seemed to be in pain I called the vet.

Have nothing about the white collar. I have much much experience about being turned down for jobs. I was once auditioned in a closet and didn’t get the job. Kisses. Keep us posted.

@Benedick: Thank you so much for the kind wishes. Our other Dalmatian, Kaleb, passed away in March, 2013, at age 12 from kidney disease. Sweet FSM, my heart aches, I miss him. On his last day, we carried him out to the lawn on his dog bed and laid with him in his favorite place in the sun. I let him go on too long in his illness because I just couldn’t let him go. I really need at least one more lifetime with these guys.

Charlie is a magic dog, so kind, intuitive, and intelligent. We’ve just bought a wheelchair to help him get around (yes, they make wheelchairs for dogs) for as long as possible. What keeps me going is knowing that there are two more sweet, loving, wonderful dogs out there just waiting for a new home and fun-filled life with us.

@¡Andrew!: Baby, don’t make me fly out there to hug you. But you’re right, and it’s important to understand that there are dogs to love … I can’t, sweetheart. I so feel for you. You’re a grown up, you know what you’re doing. I’m an asshole.

@Benedick: I don’t think that you’re an asshole at all. I’m grateful to have someone to talk with who understands, and I know that many of us here feel the same way.

@¡Andrew!: So very sorry about Charlie. Those balls of fur just tear our hearts apart when they leave.

@¡Andrew!: I really feel for you. I miss my cat Gwydion every single day of the world, especially at bedtime, when he used to cuddle up with his head under my chin. The lovely portrait SFL did of him is on my bedroom wall and is a real comfort.

@¡Andrew!: If it makes you feel any better, the World Cup starts on Thursday and that means it’s time for me to start posting pics of shirtless footballers for the Stinque Hotties of the World Cup series.

@SanFranLefty: That vood help as–how do you say–I also haf teh gay problums.

@SanFranLefty: I would certainly not object if some pictures of Rangers goalie Henrik Lundqvist made their way in there as well. Losing the Stanley Cup (as seems inevitable at this point) is tough, but at least he has that face to fall back on.

With over 85% of precincts reporting, Eric Cantor is trailing his primary challenger 56-44. Did not see that one coming.

@mellbell: One Young Gun down.

@nojo:
Shot down in a blaze of stupidity.

@mellbell: Must be hell for Henrik, what with all the womens and gay mens drooling all over him–especially on days in which he wears tight polyester pants.

@mellbell: Maybe Henrik will be a palate cleanser for the days when there aren’t so many football/soccer games. I guess I need to get my shit together and start doing some “research” on the various national teams and hottest players.

Gheyz and girlz, start sending your recommendations at sanfranlefty@www.stinque.com or in the sandbox at el Libro de las Caras.

@Benedick: Speaking of Festiva Maxima, did you know that the Dutch named their queen (p.s. they have a queen) after a car? True story.

@¡Andrew!: Very sorry to hear that. My furbaby turned 12 earlier this year and she’s slowing down. It hurts my heart to see it.