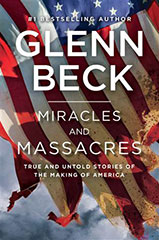 Title: “Miracles and Massacres: True and Untold Stories of the Making of America”

Blurb: “The reason why gun control is so important to government elites can be found in a story about Athens that no one dares teach. Not the city in ancient Greece, but the one in 1946 Tennessee.”

Review: “In his inimitable style, Glenn Beck writes that all the stories can be put into one of three categories: ‘The good guys win; the good guys win, but it takes a while; or the good guys lose because people put their trust into politicians instead of each other.'”

Customers Also Bought: “The United States vs. Santa Claus: The Untold Story of the Actual War on Christmas”

Footnote: What’s this about Tennessee? Seems McMinn County was run as a local fiefdom by a gang of Deep South Dems (i.e., modern Republicans) who stole local elections for years. Returning GIs hadn’t fought a war for Peace, Justice, and the American Way just to deal with this crap, and before Election Day was over, guns were a-blazin’, the local jail had its doors blown off, and the votes were “counted as cast”.

Textbook government tyranny — of a county boasting 32,024 souls in 1950. If all your textbook Government Elites oppress is the population of Gerald J. Ford Stadium, we’ll heartily agree on leaving gun control up to local ordinance.

For bonus points, watch how the exact same assholes who yip about how “power should be local, FEDRAL GUBMINT BAD!” cite the Athens thing without even a FLICKER of understanding that it negates their entire premise…

Does the rodeo clown tell the tale of Catfish Cole? A “true” US Amercian Klansman who was humiliated by the Lumbee Tribe in 1958. Who tried to incite violence against them (even the dipshit Klan knew this was dumb and only 50 idiots showed up) and was met by 500 or so angry armed natives. Shockingly shots were fired and Catfish fled into the swamp leaving his wife behind.

Got an iPhone? Open the Google app and tell it “Beam me up, Scotty.”

@Dodgerblue: I got a new iPhone last week. Highlight of my month (besides my Stinque-Up with you and Tommy in El Ay).