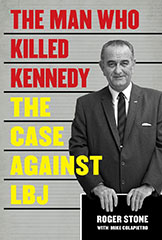 Title: “The Man Who Killed Kennedy: The Case Against LBJ”

Blurb: “Combining decades of insider political knowledge with cutting edge JFK assassination research, Roger Stone lays out the case that Lyndon Johnson manipulated the situation in Dallas on November 22, 1963, and murdered Kennedy as he murdered numerous other victims along the way.”

Author Blurb: “Roger Stone … served as a senior staffer in eight national Republican Presidential Campaigns including those of Richard Nixon, Ronald Reagan and George H. W. Bush. Stone is also credited with … the shut-down of 2000 recount that made George W. Bush President. In 2012 Stone joined the Libertarian Party.”

Review: “My only quibble with that is I think Air Force generals Curtis LeMay and most especially Gen. Edward Lansdale were key players in the JFK assassination. I think both Allen Dulles (CIA and fired by JFK) and J. Edgar Hoover (so close to LBJ) were perps as well.”

Bonus Review: “There is nothing really left to do but to go straight to the top of the Langley pyramid and finally pin the tail on the donkeys they belong to: Allen Dulles, Richard Helms and James Jesus Angleton.”

Special Bonus Review: “All the recently uncovered extra parts, when carefully connected, lead directly to GHW Bush’s door steps as being the most likely CIA operational manager of the JFK assassination.”

Footnote: Actually, we ordered the hit when we were four. John-John knew why.

The Man Who Killed Kennedy [Amazon]

Everyone knows it was MCA.

I heard it was those dastardly saucer people using the candlestick in the living room.

Wondering why no one has accused Zapruder of being the shooter. After all, he was aiming his camera at the president and could have had a weapon taped to the thing. Makes as much sense as all the other conspiracy theories.

Roger Stone… the man who has a Nixon tramp stamp.

@ManchuCandidate: There’s an argument to be made for Libertarianism, but professed Libertarians are always too batshit crazy to make it.

No, no, no. It was Lady Bird who engineered it so her daughters could be married in the White House. /considered by my Southern grandmother the most likely motivation for the assassination.

You talking about this guy? Who came to my state as a political consultant and embarrassed himself>? Not credible.

@blogenfreude: I can’t follow that article. Once a third person gets involved, I get confused.

@Mistress Cynica: That makes a lot of sense.