Stinque
Home Latest Comments Log in
If it smells, we’re on it.
Stinque
Just the vax, ma’am.
Autopia

The Taxi of Tomorrow

It isn’t a hybrid. It isn’t wheelchair accessible. It certainly isn’t pretty. 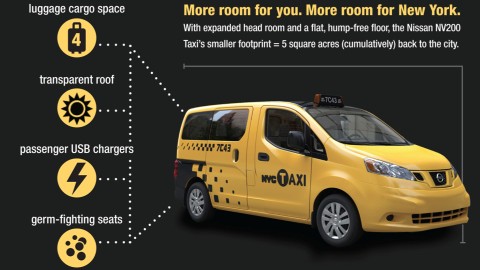 And now it isn’t going to happen:

A Manhattan Supreme Court judge has ruled that New York’s Taxi and Limousine Commission overstepped their authoritywhen they mandated that all NYC cabs be Nissan’s NV200-based New York Taxi. After October 28, all non-hybrid cabs in New York will become illegal, so those New Yorkers better figure something out, pronto.

So the Crown Vics, a large chunk of the fleet, are going away, and there’s few cars that can replace them – the Toyota Prius, Camry, and Highlander, Nissan Altima, some VW clean diesels, Ford Escapes, and a few others.

Should be an interesting few months.

I saw Prius taxis in the city. The drivers still don’t know where they’re going.

In London they drive around the city for months as they train. They call it being ‘on the knowledge.’

That is one fugly ass car.

Ess Eff is all Toyota Prii and some sort of smaller hybrid SUV. They have wheelchair accessible minivans, I can’t remember if those are hybrids.

@Benedick: Don’t know if it’s urban myth or what, but I remember reading something once that neurologists found that a part of London cabbies’ brains are bigger because they have to basically memorize the entire map of the city in order to get their license.

/scurries off to the Googlez of the Intertubez…

@Benedick: I had to navigate on Google Maps for a Santa Monica taxi driver last week on a 15-mile trip to Rancho Palos Verdes, even though he had an internet mapping gizmo in his cab. Maybe I should have split the fare with him.

@Benedick: Was that Urdu or English?

Forgot about these … been in a couple of them, and they’re very good taxis.

@Jenny_F: I don’t know if you know Manhattan; it’s a grid; the Bronx is up and the Battery’s down. To go lower you drive south, down towards the tip. To go west you turn right. The math is not hard.

@BobCens: Really. The cabbies are no longer Greeks who don’t speak English or know where Carnegie Hall is they’re Indians. Tip for out-of-towners: Always get in the cab and close the door before you give your destination. They can’t refuse you. They will try. Call 911 and tell them you are in a hostage situation. That usually clears the air. But at least now you can pay by credit card. Even if they did buy all the readers in the gray-market knock-off shops on Canal so they don’t often work.

@Benedick: I had to get a taxi from the train station in Richmond, VA (I know, right?) and although the fare was more than $60 to my hotel, the cabbie was Senegalese and we had the most delightful discussion about immigration law, the challenges of learning French vs. learning English, and whether I might be infertile.

Yes. For $60, I had a non-tactile consultation with an immigrant OB/GYN who was forced to drive a cab because he would basically have to re-do several years of study before he could get on path towards getting his license. ‘Murrica!

@flypaper: I hear ya. My great friend in the land of limes arranged for me to be met at Heathrow – I will pause while we all take in the horror of that – by a town car to bring me to where she lived off the Portobello Road. The driver of the immaculate car was an Iranian surgeon supporting his family by pandering to nitwits like me. A man of great charm and intelligence.

@Benedick: I was in church.

I always thought “supplicant” had a naughty ring to it.

@nojo: Depends on your accent.

Um. I worked at a firm that gave us cab vouchers. Ride plus tip covered by the client. That’s how we rolled.

I got ripped off in SF in one of those Priuses. “Oh, we can’t run your card.”

“Okay.” He pulls out that old school manual impression thing. “They charge us 10%…”

Californians on the 5 during rain. You’re a goner if it hails.
Boston — all of it
D.C. — all of it
Seattle assholes at 1st Ave. and Columbia St.
Shoobees on South Jersey circles
Snowbirds on I-95 South <– Cataracts in Cadillacs
Zonies in SoCal (see Snowbirds)
Palm Springs (see Snowbirds)

@nojo: Not to mention the “laying on of hands.”

@nojo: “…first you get down on your knees, fiddle with your rosaries…”

@Tommmcatt Can’t Believe He Ate The Whole Thing: Groovy Pope does seem like a Vatican II kind of dude.

@Tommmcatt Can’t Believe He Ate The Whole Thing: “bow your head with deep respect, and…”

@Walking Still: hehe, I knew one of you would know (besides Nojo, I mean).

@Benedick: My favorite is “Be Prepared”.

@JNOV: You forgot to add people who get to the automated FastTrak/Easy Pass lanes on the NJ Turnpike/Garden State Parkway/Bay Bridge who don’t have transponders in their car and then attempt to change lanes to a cash lane. I have perfected the art of what I call “The Jersey Thumb” on my horn, which I don’t lift up and I have sustained honking until the person gives up and drives through the Fast Trak lane and gets nailed with the ticket. I’ve done it twice on the NJ Turnpike, and I do it about once a month on the Bay Bridge toll plaza. (The only time I won’t do it if it’s someone with out-of-state plates who appears to be honestly stupid about what “FasTrak Only” signs might mean).

Always makes my day. Folks don’t use their horns much in the Bay Area, so when I whip out the Jersey thumb, or even just tap my horn, it snaps them into shape.

Meanwhile, if we need a break from the teabagger ass-hattery in Washington, I present to you 25 diptychs of cats and hot guys striking similar poses

@Tommmcatt Can’t Believe He Ate The Whole Thing: I’m a big fan of Poisoning Pigeons in the Park, but that’s just the treehugger in me.

TJ/ Will Obama wimp out on the shutdown, do you think? Both sides are making compromise noises.

Also, Noge, did you know the link to account settings is broken? I want to update my screenname from last Thanksgiving but can’t get in.

@Tommmcatt Can’t Believe He Ate The Whole Thing: That’s about Thanksgiving? I had a completely different picture in mind.

Just came in from the garden where we’re ass deep in fall. After a wet and, as I thought, very beautiful summer now autumn is all apricot, gold, and crimson. No wonder this is my favorite of all the places we’ve lived. Plus the great advantage of being outside is that no one is yammering about debt defaults or how Obama won’t negoooooooooosheeeee-ate! I was moving the hemerocalis Hyperion I bought a few years back and planted somewhere they didn’t thrive and couldn’t be seen. I’ve been unusually fortunate this year in that I’ve been home for almost all of the growing season. Right now the hydrangeas (I’ve got a lot) have turned from creamy white to dark rose red. The last big display of the year. The next few days I’ll plant another couple of hundred Dutch Master daffodils, more unusual hybrids spread about, tulips near the house, and I think I’ve found a place for cimicifuga, an extraordinarily beautiful perennial that looks like the tail of a rocket and likes cool, moist shade. Then, in a few weeks’ time, everything will be cut back and the awesome hardwood mulch I bought last month from the heartthrob tree-guy will be spread about.

@Tommmcatt: Based on recent history, Bammerz is about to bend over. We’re already stuck with the despicable Paul Ryan budget.

Supreme Star Chamber (In)Justice Ol KKKrayzee Eyes Bachmann has announced that Bamms has committed impeachable offenses, so I guess we have that to look forward to. The voices in her head also have ordered her to kill Michael, Sydney, Matt, and that conniving, husband-stealing bitch Amanda by blowing up the whole apartment building.

I found my Halloween costume courtesy of Henri.

@SanFranLefty: I’m thinking Lady Mary, but the right style of dress might be hard to come by.

@Mistress Cynica: I ordered it. Henri’s thieving filmmaker says that the proceeds are donated to animal rescue groups.

@SanFranLefty: I’ve always wanted to paint my hair white, wear a natty suit and glasses, then walk around droning “Dee-sign- urrrs” and “make it wurk”!

@¡Andrew!: I’ll miss her when she goes, though, as I’ve said before, she’s no Kitty Harris.

He’s till holding pretty strong as of this morning. Could it be that we’ve finally reached the “fuck these guys” moment of the Obama presidency. The Dems seems to have grown a spine. Harry Reid is so unused to his that he can barely walk.

I guess the glitches are fixed – I signed up for the ACA. Some of the deals looked very good.

@Tommmcatt Can’t Believe He Ate The Whole Thing: Also, Noge, did you know the link to account settings is broken?

Seems to work from here. Just tried it with my test plebe account.

@blogenfreude: Worked for me yesterday — but NY and Cali both have state exchanges. They both tie in with fed databases under the hood, but most of the headline problems I think are with the national version.

As others have noted, Republicans have been brilliant about sucking all the media air out of the room the past couple weeks. If not for the Shutdown, all the news would be about OBAMACARE FAIL.

Going to see Einstein On The Beach tomorrow. Missed it the first time around.

@Tommmcatt Can’t Believe He Ate The Whole Thing: Did you see this? As if I didn’t already adore Tim Gunn, this just took it up a notch.

@SanFranLefty: Humility is the most endearing of all virtues, isn’t it?

@mellbell: It’s hard to pull that off without spending a lot of money. There are costume houses that rent antique frocks but it’s not cheap and extreme care must be taken. What I wondered is why not as a contemporary equivalent and go as Ann Romney. You could wear a pinafore and have a platter with Mitt’s Meatloaf. See today’s book thread. Magic underwear could somehow be featured.

@mellbell: Buy an old wedding dress at a thrift shop and dye it, it would make a good start.

@Tommmcatt Can’t Believe He Ate The Whole Thing: Oh, the sidebar menu. Like I ever pay any attention to that.

The Unbearable Whiteness of Being
The Reckoning
Top Dogs
American Inception

MANCHUCANDIDATE • You'll See It’s True When I was young, my dad would tell/rant at me about because you're not white that you have to be…

BLOGENFREUDE • It’s an Anarchist! "Idiots, explosives, and falling anvils ..." Isn't that what life is all about?

MANCHUCANDIDATE • Baby It’s Scolds Outside Thanks. Coming to grips with this hasn't been easy. Just glad I don't FB that much or I might…

SANFRANLEFTY • Baby It’s Scolds Outside @ManchuCandidate: I’m so sorry, bud. Fucking cancer sucks but that one is especially…

NOJO • It’s an Anarchist! @bruce.desertrat: Yeah, I went looking for a story on the incident, and it was just the latest…

BRUCE.DESERTRAT • It’s an Anarchist! This is ongoing escalation of the ammosexual culture. These explosive devices are made of a legally…

¡ANDREW! • Baby It’s Scolds Outside I'm so sorry, Manchu. My thoughts are with you and your friend.

NOJO • Baby It’s Scolds Outside @ManchuCandidate: Christ. That’s the one that took out Steve Jobs. It’s the fuck cancer of fuck…

MANCHUCANDIDATE • Baby It’s Scolds Outside Fuck Cancer. My best friend in the GTA told me that his cancer is now metastasized and he's got at…