Stinque
Home Latest Comments Log in
If it smells, we’re on it.
Stinque
Mastodon: @stinque@mas.to
Department of Lady-Bits, Sociopaths

Who Would Jesus Starve? 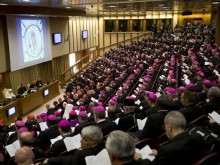 Proving yet again their hypocrisy and fixation for the pre-born over the born, a week before the government shutdown the U.S. Conference of Catholic Bishops sent a letter to Congress urging them to include the revocation of contraceptive coverage in the Affordable Care Act as one of the Republicans’ hostage demands over the shutdown and raising the debt ceiling.

As Congress considers a Continuing Resolution and debt ceiling bill in the days to come, we reaffirm the vital importance of incorporating the policy of this bill into such “must-pass” legislation.

I guess it’s okay that the 53% of LIVING American babies who receive benefits from the Supplemental Nutrition Program for Women, Infants & Children (WIC) will go without assistance ($109 million in unpaid vouchers as of this morning); that Head Start programs close their doors for early-childhood programs; that VA employees are being worked like rented mules to get benefits out the door for disabled veterans, and there aren’t benefits being paid to survivors of dead soldiers; that NIH and NSF have had to cut off funding for scientific researchers that can stop illnesses and prolong lives; that the CDC has food inspectors furloughed so nobody is around to investigate salmonella outbreaks affecting people in 20 states; or that money from HUD to assist in funding affordable housing will dry up if this lasts much longer.

The important thing is that the church make sure those uppity whores who dare to have sex for any reason than to have a baby not have access to birth control.

You’re in a good mood, Lefty.

And let me just ask you, Secretary, you were a general with an outstanding, distinguished combat record. And, you know, Congress voted to pay federal employees when the shutdown ends. So they’re gonna be paid. Does it make any sense to you to not allow them to work?

I can’t think of many. And they are ready to work. They are — I would just, you know, refer to the folks in the Benefits Administration who have brought this backlog down, 193,000 claims in about 190 days. Lots of folks wondered whether they were gonna be able to do it.

VBMS will be important to that effort. But VBMS is just coming online. So all of this work was done by the good folks in the — the Benefits Administration. I would — I would speak for them. They’re disappointed that the ground they gained is being lost day by day.”

@JNOV: The House passed the back pay bill but last I heard John Cornyn has a hold on it in the Senate because he wants the issue explored. You and your coworkers may want to help him out.

@karen marie might be peeking just a little: What is there for Cornyn to explore? Whether the vets end up on the street at risk of death or injury, versus getting a pittance to help them keep the heat on? To call that asshat a douche would be an insult to douchebags.

Meanwhile, is it bad that I saw this picture and remembered the Letterman “Uma-Oprah, Oprah-Uma” line (that I thought was funny) and said out loud “Malala-Malia, Malia-Malala”?

@karen marie might be peeking just a little: Yah. Those of us who are “excepted” will get back pay once the gubmint opens. I think not paying people for work performed is called “slavery,” but who knows? Nothing is clear. We look like the fucking Walking Dead. (I think the new season starts tomorrow? I hope so due to Jesse withdrawal.)

Those who are “non-excepted” might get paid as they were after the last time the gubmint shutdown. Those whose agencies are fully funded will keep on keeping on with monies. The problem is that the uncertainty of when excepted employees will be paid coupled with the uncertainty of whether non-excepted will is slowing down the economy more than expected. Plus, getting half a pay check yesterday has many rattled and pushed back grander plans of spending money, like buying a house for some.

My agency was funded through Monday, and our pay period started last Saturday. In my case, if the gubmint is shutdown for another week, my paycheck will include pay for one day, and that’s it.

Being a firm believer in AmuriKKKa, and being bipolar, I’m doing what I can to keep the economy going. I can’t imagine that my paycheck will only include pay for one day. I refuse to believe it.

To that end, I’m on my way to REI because they are having a sale, and I really need some gloves and waterproof shoes. And flannel. More flannel. One can never have too much flannel.

I rented a car, and I’m going to a bar to watch football. Then I’m going to see my co-worker’s band in Fife. Tomorrow I’m going to Olympia; I might stay overnight. Monday I’m watching Monday night football with the Enterprise Rent-A-Car dudes (who happen to be Washington State fans) at the same bar I’m going to today.

IOW, they have abused us so fucking much this last week that I need this, even if it means I’ll be eating hotdogs in the dark for awhile. We no longer get rah! rah! emails. Those emails only served to piss us off while they turn the screws expecting the same output minus ~100 workers. I think the service center dude overheard me cursing about and laughing at the emails all week. (His office is conveniently located near my cube.)

So, yeah. Morale is at an all-time low. Vets might stop getting benefits after Nov. 1st. We keep reminding ourselves of why our jobs are important to vets, but when management beats the tar our of you, and you know your non-excepted coworkers will be coming back fresh and happy, you start agitating for 8 hours of leave for every day you worked and your co-workers didn’t, assuming they’ll get back pay.

And that back pay paycheck? If it includes more than 80 hours it could be largely eaten up by federal taxes. Of course we’ll see our interest-free loan to the gubmint at tax time, but that check is going to suck in the sense that it’s not going to make us whole in the short term.

Many creditors are not giving a fuck about us being on furlough. They want their money, and they want it on time. Those Please Don’t Cut Off the Heat letters we got? They don’t mean shit to a lot of companies.

So, here we are. I’m late for the REI Members Only Sale that I had been looking forward to for a month, but it’s cool. I need warmer waterproof clothes, things I couldn’t afford last year because I was catching up after being unemployed for about two years. I’ll have to start catching up again if we don’t get paid in two weeks. It will probably take me another year.

I was going to buy a sofabed this weekend so Jr. doesn’t have more air mattress issues when he visits this winter. I will buy his plane ticket if nothing else. He’s down with eating hotdogs as long as we have the internet. I’d better call Comcast…

@JNOV: God bless you, hon, that’s terrible. They have to end this soon, they just have to.

@JNOV: What’s the update? Back pay yes? Flannel and Olympia?

Saw a colleague/friend of mine in the City of Angels yesterday. Her 22 year old daughter had to quit college last year after being diagnosed with a super rare fucked up disease that has a lot of syllables and I can’t remember what it is. Said friend of mine had almost completed the arduous process of getting her kid enrolled in a NIH-funded experimental treatment program at UCLA, but everything was shut down, went to fakaka, and has to start over thanks to the sequester. Can’t just start and stop scientific or medical testing. Or when you do hit the pause button, you gotta rewind and go back to the beginning.

Flannel, yes. Money, yes. Olympia, not yet but soon. Mandatory overtime back. I work for a bag of dicks.

@JNOV: It’s strange to me that in a nation of free men one can compel work.

@Tommmcatt Can’t Believe He Ate The Whole Thing: It blows my fucking mind that they can force us to work 20 extra hours a month. I do not remember reenlisting. Speaking of which, all of our workplace lingo is military.

What one would call a “shift,” and not the type Bene favors on those lonely nights, we call a “tour of duty.” You can be AWOL (which is UA [unauthorized absence] in the Navy), and you take “leave” instead of “vacation.”

It’s almost a seamless transition for new vets, but I was a civilian even when I was enlisted — I never had military bearing or any of that dumb shit. So, I got written up. A lot. Something about disrespecting a superior whatever. They’d scare me, and then the scare would wear off.

Now I’m like, “Whatcha gonna do? Throw me in the brig?” I’m very lucky to have met someone who has been there a lot longer than I have who likes to call bullshit, even if we just do it in IM. He keeps me sane.

The weirdest thing is that they can move me against my will within the jurisdiction of this regional office. That’s total crap. They’ve tried to move me once. They’re probably going to try to move me in February. We’ll see what happens.