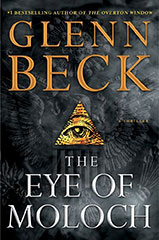 Title: “The Eye of Moloch”

Blurb: “On one side, an unlikely band of ordinary Americans ready to make their last stand in defense of self-rule, freedom, and liberty — and on the other, an elite cabal of self-styled tyrants who believe that unlimited power should be wielded only by the chosen few. That group, led by an aging, trillionaire puppet-master named Aaron Doyle, will stop at nothing to destroy the myth that man is capable of ruling himself.”

Review: “It’s as if Glenn sat down, wrote this book over the weekend and rushed it to press.”

Customers Also Bought: “Blacklisted by History: The Untold Story of Senator Joe McCarthy and His Fight Against America’s Enemies”

Footnote: Don’t go writing about puppet masters when you pull all your characters with strings.

The Eye of Moloch [Amazon]

You know he’s got to be reciting from his delusional nightmares about George Soros, who in Beck’s mind was the archetype for the evil Emperor Palpatine. Beck is so predictable it is pathetic.

@gunnergoz: it’s like McDonald’s: not good, not good for you, but always exactly the same.

Too bad his fingers haven’t contracted laryngitis like his “vocal chords”(sic).

So I just watched all of Life of Pi. Anyone realize the fantastical story wasn’t real as you were watching it? Oh right, spoiler alert. Seems to me that’s kind of vital and I did not get that at all. I just thought the special effects dept. put in some heavy overtime before they went bankrupt.

Also saw Behind the Candelabra which I loathed. I’m astonished it didn’t draw howls of outrage. Left me with a very bad taste in my mouth – as the bishop said to the actress.

@Benedick: Ha! I agree about Candleabra, though I must say it was some of the best- and the worst- makeup I’ve seen on T.V. And Rob Lowe deserves a shout-out for the campiest performance I’ve seen in years.

I love both the book and the movie of Life of Pi. I like the way it examines both aides of the problem of the eternal, and somehow manages to be respectful to both sides.

Ah, lord, I am way too drunk to close that tag.

@Tommmcatt Can’t Believe He Ate The Whole Thing: You have faith and I don’t and I found the movie’s discussion of such topics to be a bit Deepak Chopra but I was interested if others had realized that the tiger tale is a cover for the real story before it’s revealed near the end in the scene with the adjusters. Is that clear in the book? For example, reading Atonement by the time the hero returns with the twins at the end of the first movement, as it were, one is aware that all is not what it seems and that the narrator is up to something. This understanding develops as the novel continues opening into an aching regret that is very moving.

I thought the Pi screenplay very wooden but wondered if its poor construction came from the novel. BTW, have you seen Weekend?

The TV version of Liberace’s story some years back with Victor Garber as himself was in every way superior.

In other news we now have two pairs of barn swallows nesting on the porch. Second pair is in the middle of building their nest and are camping out till it’s finished, sleeping nearby in a groin above the kitchen window.

@Benedick: I was shocked – shocked! – to learn that Liberace was gay. My mom told me he used all those candles “so he can see the piano better”.

My neighbor is fostering a mother cat and 5 kittens, and I got to play with them yesterday.

We now return to our regular scheduled programming.

According to the ‘tards at Yahoo News, Business Administration is now the worst major for finding a good job. Basically, all college degrees are worthless now, with the exception of computers and healthcare. So businesses don’t need business majors anymore in the new, new, insane kleptonomy. It really is different this time!

1. Business administration / management. This is one of the most popular majors, which has produced a glut of grads with business degrees at a time when big companies are reluctant to hire. “A lot of students have the idea that if they just major in business, they’ll be a successful Wall Street banker,” says Bardaro. “Unfortunately, the number of jobs available in that sector is very, very small.” One way to distinguish yourself: Develop a concentration in quantitative courses such as statistics or finance.

@Benedick: My neighbor lost her husband to cancer 6 months ago and kitten fostering has been helpful to her. She is sensitive about not becoming a cat lady / hoarder, but I must say that her house had a certain eau de cat pee aroma to it.

@Dodgerblue: My kid has been home since May 10th. Our apt has a certain eau de ce jeune homme.

@Dave H: I didn’t say smelly bad. You guys just have a distinct smell. I’m sure chicks do, too. And if I lived with a guy, I’m sure I’d get used to the smell, kinda like Dodgerblue will with the neighbor lady’s cats. We won’t comment on nojo’s Birks and how the PNW carries the memory in its soil.

Did I tell you guys I passed Sitsop (apparently pronounced “sits-UP”) unfinished nuke plant? I still can’t get that Williamette thing down.

Oh, and I’m camping at The Gorge for Pain in the Grass.

This is my midlife crisis, but it doesn’t seem critical.

Jr. met Alice in Chains (DuVall was the only one who wasn’t a dick), and I’ll be heading to Olympia for a weekend to hang out with 2nd-3rd wave Riot Grrrls. I hope to meet quiet person but loud drummer Tobi Vail of Bikini Kill. nojo is going to puke, but if I hadn’t been in the Navy in my early 20s, I would have been in Olympia. I would have been a drummer.

I’m the same age as so many of the people who tried to do something here (I know everyone was trying to do something somewhere, whatever that something was), and now that we’re staring 50 in the face, we’re looking back on what we thought was possible when we were so young, what went wrong. Were we wrong… Should we reassess and try again?

I’m learning to be happy for once.

I’ll ask the dude from Pyu-WALLOP.