How I Met Your Conductor 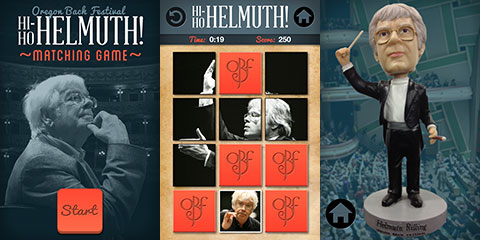 True story: A few years ago, Silent Creative Partner mocked up a silly matching-tile game app. (Think “Concentration”, if you’re old enough to think that.) Some time later, when we were looking for an excuse to learn iPhone programming, we glommed onto his mockups as a starter project: How the hell would be make this work?

Turned out, it wasn’t that hard — at least for an Obsessive Latent Geek. iPhone programming has an enormous learning curve, but once you reach the summit, it’s easy enough. Only took a couple weeks, and then we had a beta we could show off to clients. Look! We can do this! Pay us to do something else!

But one of our clients wanted that — the matching game. Only with client-specific graphics. “Reskinned”, as we say in the Geek Trade.

Oh, and could we add a virtual bobblehead?

So sure, we reskinned it, programmed a bobblehead, added a few other features. And then Silent Creative Partner looked at the result, decided it wasn’t classy enough, and redesigned the whole damn thing.

The client was the Oregon Bach Festival, and the app was intended as a fun going-away present for its German conductor, who’s retiring after four decades of stick-waving. And a few weeks ago, after quietly launching the app, back came a video from Germany: the conductor’s birthday party, friends and family seated around a festive table…

And everybody playing the app.

We’ve been working in public since high school, but that was a new one.

The rest of the story is yours to endure in the App Store. And, unlike the last app, this one’s free.

Side note: best fake-conductor name ever was coined by Peter Schickele – Heiliger Dankgesang.

You crazy kids and your ‘apps’.

You know what the people need? I’ll tell you what the people need. An app that goes in and deletes all of last night’s comments, tweets, FBs, linkedins, instagrams, etc, with one click so one could erase the sum total of any internet activity after Mr Tito came to call. Now that would be an app.

Awesome. Sending this link to the jr…

@Benedick: I want an app that makes my copier/printer at the office work and not go fakaka every 30 seconds.

@Benedick: Could we do one for the 90’s? There are some mornings I’d like to delete….

@Jesuswalksinidaho:
I would laugh for a long time if it were so.

@Jesuswalksinidaho: Only if he developed a craving for gold-digging Dengbat.

TJ/ Which one of your guys is “Resolute Goodpace” on facebook? Because I’d like to argue with you at length about various things.

@Tommmcatt Can’t Believe He Ate The Whole Thing: Not me, but I’ll argue with you at length, if you like.

But only about one thing — that’s all I have the energy for.

@JNOV: I wanted to argue with thus Goodpace person, who posted a video claiming that WIC requires people use their vouchers to buy GMO-based food (it doesn’t), and that Bill Gates supports eugenics (he doesn’t, the clip is of him talking about the high cost of the end-of-life care). I’m all for random lefty bomb-throwing, but a little respect for facts, please.