Stinque
Home Latest Comments Log in
If it smells, we’re on it.
Stinque
America is a Death Cult.
Department of Lady-Bits, Mittens 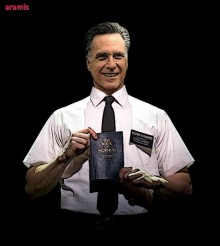 Speaking at the graduation ceremony at Southern Virginia University, a Mormon college in Lynchburg, VA, failed Presidential candidate Mitt Romney advised the students there to get married as soon as possible and get busy making a “quiver-full of kids,”  because young people who wait until their 30s to marry are “going to miss so much of living.”

Mr. 53% went on to note that it’s okay to squeeze out the children even if you aren’t making money because “God doesn’t care if you’re rich.” Okay, good luck with that.

Mother Jones notes that the “quiver-full” reference is a nod to Psalm 127,  and a dog-whistle to the evangelical Christian Quiverfull movement that advocates a virulently anti-contraception position and embraces Biblical patriarchy.

Its followers see feminism as a slippery slope, starting with family planning—which is viewed as women taking unlawful ownership of a body that rightfully belongs to God—and ending with gay rights, abortion, divorce, and witchcraft (really).  Given their view of feminism as “a totally self-consistent system aimed at rejecting God’s role for women,” the movement’s leaders instead suggested a sort of Renaissance woman alternative for conservative Christians: They would be submissive wives, prolifically fertile mothers, and home-schoolers who train their children (especially their daughters) to grow up and do the same. The children of these families, the “arrows,” are the tools of spiritual warfare for a community that envisions a long-term campaign to win the culture wars demographically—by having more children than its opponents.

Thank the Flying Spaghetti Monster, we dodged a bullet in that election.

He makes me think of the squire addressing his tenants and staff at the annual garden party while his wife extolls the virtues of thrift to the womenfolk while wearing her new frock just arrived from Paris.

So all this time Mitt’s been wearing short-sleeve dress shirts under his suits? That’s always a dead giveaway that the wearer is a diquehead.

Wait. That picture is photoshopped, right?

@Dodgerblue: It’s so hard to tell. He never looks human.