Shut Thee Behind Me, Door! 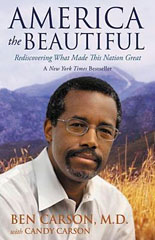 Title: “America the Beautiful: Rediscovering What Made This Nation Great”

Blurb: “From his personal ascent from inner-city poverty to international medical and humanitarian acclaim, Carson shares experiential insights that help us understand … what is good about America … where we have gone astray … which fundamental beliefs have guided America from her founding into preeminence among nations.”

Review: “He warns his readers that political correctness threatens to deprive us of freedom of speech and thought.”

Customers Also Bought: “Leading the Way: The Story of Ed Feulner and the Heritage Foundation”

Footnote: Finally, a black conservative intellectual who’s not a complete fool! Quick, get him on Hanni—

“My thoughts are that marriage is between a man and a woman. It’s a well-established fundamental pillar of society and no group, be they gays, be they NAMBLA, be they people who believe in bestiality, it doesn’t matter what they are, they don’t get to change the definition,” the doctor, who is the director of pediatric neurosurgery, said on Hannity’s show Tuesday.

“He warns his readers that political correctness threatens to deprive us of freedom of speech and thought,” much like the Right’s war on facts, science, vaginas and math.

“He warns his readers that political correctness threatens to deprive us of freedom of speech and thought.”

Because if there’s one thing that keeps the average wingnut up late at night, it’s the terrifying prospect that hate speech might become socially unacceptable.

I don’t think my eyes have gotten bad enough to miss the major difference in the skin color of the man on the video and the man on the cover of the book. Is this a reverse Obama/OJ tinting job for an African-American conservative? His photo is about halfway to John Boehner orange.