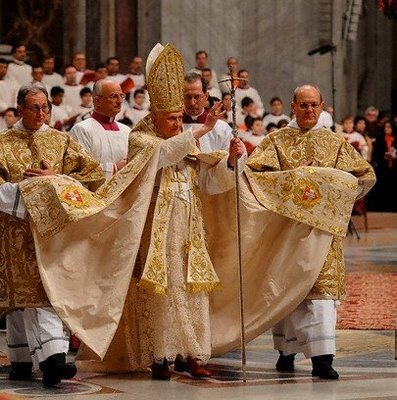 Is nothing sacred? Must Big Gay keep shoving gayness down everyone’s throat?

Now it turns out Benedict XXCIVXX (no relation) was forced to retire before it was revealed that the Vatican is not much more than a gay knocking shop for gay prelates to do gay things with gay escorts and gay priests and gay cardinals and other random gays. Semen on the host? Anything’s possible according to some kind of Italian Washington Times. See above linque.

Of course, Big Gay wasn’t happy with His Holiness correctly pointing out that homosexuality is s greater threat to humanity than rainforest destruction so they vowed to nail him. (Warning: It’s the Mail. If you’ve been wondering if life wouldn’t be better in the UK just check the links to the right of the piece. And now think that the cost of living is about ninety million bajillion times what it is in the States plus you have to look at fat people on long red sofas on TV and no… unless you base quality of life on price of champagne in which case you might have a point.)

No hot asian boys were harmed making this post.

@benedick – you know, Tesco prices were pretty good, vodka for not a whole lot more than the duty-free price.

I was listening to a chat about this on NPR this morning while making my rounds. and laughing outloud. you know, this whole pope thing smells. it smelled before this and it smells more all the time

the pope just quits because he is old. un huh.

@CaptHowdy: I think the press release actually said that!

@blogenfreude: They tempt you with the vodka then slam you with the bus/tube/life expense. Plus the horror of, you know, the limeyness.

You mitre? you brought ‘er.

@Benedick: I’m in love with David Starkey. He’s the only one who has been able to make sense of all that weird nobility shit.

I’m getting an ad for the book “Why Priests” by Gary Wills.

@CaptHowdy: The only thing I can figure is that it was the pope himself who had been blackmailed and he’s hoping to get away without anyone finding out what for. Somehow I have a feeling this is going to be Super Juicy.

ADD: Anyone want to do a pool for the nature of his blackmailable transgression?

lets see, the first resignation since 1415. yeah, I would say jucie.

I presume the Cardinals were singing the French Mistake

is there something special I have to do to get a preview image if I link to something here on Fbook? couldnt get it to work before. truth. I am a bit of a FB novice having mostly avoided it for years

@CaptHowdy: It’s all automated — a series of Facebook/Twitter-friendly meta tags that provide a blurb and preview image.

Specifically: When I post an item to the Stinque FB Page, I paste the URL into the “write something” box. FB then collects the meta tags, presents the blurb and thumbnail, and then I rewrite the comment to remove the link.

That’s a tad counterintuitive, but that’s how FB has been doing it for the past year or so. Zuck may be filthy rich, but he’s still a geek.

@nojo: I couldn’t follow that at all, but for some reason I automatically get a preview link when I post a URL to FB.

@Dodgerblue: Well, yes, that’s the short version. Why that works involves some Stupid Geek Tricks I implemented some time back.

I’m still proud of the Twitter “summaries”. Similar trick, but Twitter had to approve the site before displaying them.

@Dodgerblue: Approved us as a “valid news source”, worthy of inclusion in their “summary” system. As opposed to MSNBC, which disapproved us because of our potty mouths.

thanks I think I have it. I will try with the new post

Oh dear God. Howdy, noje and Dodge just got into a nerdoff three-way. How hot is that? I need some private time.

Plus there’s this the creepiest memento of Benedick’s papacy.

OK. Maybe not the creepiest but…

No. It is the creepiest. Let’s just hope it wasn’t after Easter.

(I have phone numbers for anyone interested. Yes, Ivan and Boris are interested in getting out of Romania for a life of freedom in Vegas. Ivan is the one on the right. Boris has got the pecs and a burning desire to model for Aussie Bum. His sister Sonja is the bint. Clearly they will do anything for money.)

I remember seeing that when it happened. I imagined the poop – when they were done writhing and rolling – mumbling to everyone else in the room “leave us” just like the emperor in that star wars opera scene

@CaptHowdy: And the hairless bodies! Ugh. And the nuns. From our Central America nations since our US bitchin nuns don’t do old style.

The denial of the markers of sexuality coupled with the ogling. I can’t cope. Though I’m wondering what those boys are wearing under those ghastly nylon pants. Because we do get treated to baskets. I would have put them in wrestling singlets but that’s just me. That’s not this. It’s Cirque de Sogay Vatican.