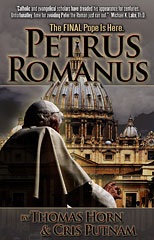 Blurb: “For more than 800 years scholars have pointed to the dark augury having to do with ‘the last Pope.’ The prophecy, taken from St. Malachy’s ‘Prophecy of the Popes,’ is among a list of verses predicting each of the Roman Catholic popes from Pope Celestine II to the final pope, ‘Peter the Roman,’ whose reign would end in the destruction of Rome… According to the prophecy, the next pope (following Benedict XVI) is to be the final pontiff.”

Review: “While the astonishing breadth and depth of material covered within this book take the reader into regions far beyond our local and national boundaries, the journey culminates in, I think, the reader achieving a much more profound understanding of where American churchianity stands within the doomed rush toward the harlot religious system of Revelation 17.”

Footnote: Bullshit. Everybody knows that the Final Pope is a bunny.

Although to fair, they have a point. Peter already has crippled Rome. The whole touching young male peter and then covering it up problem that is. Not a good thing when the RC Church’s power is derived from moral authority.

And what the fuck kind of word is “churchianity”?

Of course wingnuts would love this prophecy – it’s basically the 1590 equivalent of a not-so-Breitbart hit piece, most likely constructed to shill for a particular cardinal’s candidacy:

If “destruction of Rome” means that plaintiffs’ lawyers force the Vatican to sell of its assets to pay sex-abuse victims, then I’m in. I’ll buy the book.

@redmanlaw: Like Manhattan, even the Bible boils down to a series of real estate deals.

Clearly those underground bunkers crazies built for last year’s Mayan Apocalypse are still a great investment. Buy lots of guns and survival books and guns and ammo and guns and beer and more guns and freeze-dried food and still more guns to survive the coming end times/Armageddon/zombies/aliens/socialists! Use your last welfare checks to support unfettered capitalism just like Jesus did in the temple. Not that real Christians will get to use any of the crap because God has a get-out-of-jail free Rapture ticket in his pocket for every one of you.

And who shall wear the robe and crown
GOP, show me the way !

I thought I was the last pope.

@Benedick: Queen, pope, what’s the diff? At least QEII varies up her ensembles more than Ratzinger.

@Benedick: You are, dear, shhh now.

Glad the Downton season is over. They’re running out of corpses.

@nojo: They’ll need to start killing each other soon.