Stinque
Home Latest Comments Log in
If it smells, we’re on it.
Stinque
Cassandra was right.
Department of Lady-Bits

Well boys and girls it’s a new year, so that means a new legislative session in states across the nation (except for the Texas Lege which thankfully saves its kkkrazy for only the even-numbered years).  So you know what else that means?

That’s right! It’s time for GOP politicians to find new creative ways to crawl all up inside American women’s lady-bits and bonus points for involving rape. 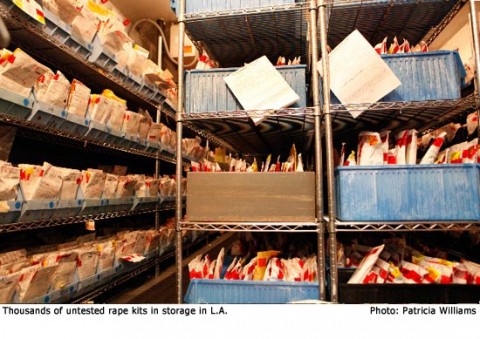 This time the KKKrazy comes from the Land of RedManLaw, and for a new twist, from a an alleged woman in the statehouse:

A Republican lawmaker in New Mexico introduced a bill on Wednesday that would legally require victims of rape to carry their pregnancies to term in order to use the fetus as evidence for a sexual assault trial.

House Bill 206, introduced by state Rep. Cathrynn[*] Brown (R), would charge a rape victim who ended her pregnancy with a third-degree felony for “tampering with evidence.”

Third-degree felonies in New Mexico carry a sentence of up to three years in prison.

No word if the Peach State Uterus Police will be charged with a similar duty to ensure the “legitimate rapes” are prosecuted.

Here’s an idea – how about these state legislatures get concerned about the huge backlog in police departments across the nation in processing rape kits?

*I’m always suspicious of deliberately misspelled names such as this.  What, the correct English spelling of the Great one of Russia is too boring? Amirite, Stinque grammarians?

[HuffPo: New Mexico Bill Would Criminalize Abortions After Rape as Tampering With Evidence]

“Cute and clever” name spellings are a pretty big indicator of class/education levels, said the Dowager Countess with a sniff.

@Mistress Cynica: When naming a daughter, people need to ask themselves if they want to send her to the pole or the presidency. Here’s a hint – unless you’re Welsh, there’s no reason for gratuitous use of the letter Y. And there’s no excuse for the letter Z unless you’re naming her Zora.

And I wonder how many of these uterus monitors would be willing to adopt the “evidence” once the state was done with it.

@blogenfreude: Yes, of course, Zelda is more than okay. I knew there was another literary Z, I just couldn’t remember it with a cat on my lap batting at the dinner plate while I was posting.

@SanFranLefty: Zoë is also OK given the existence of Zoë Wanamaker, but that’s as far as I’m going.

@blogenfreude: Yes, true that, one of my god-dogs had that name. So there are three reasons for the Z. Zelda, Zoë, and Zora.

How is an abortion “tampering with evidence” anyway? The tissue can be collected, with proper chain of custody, for DNA testing. Try again, “Cathrynn”.
I bet her children all have names beginning with the same letter, another indicator.

@Mistress Cynica and blogenfreude: P.S. I love that we are so horrified by the subject at hand that we digress into the science of naming children and Z literary figures.

@SanFranLefty: There’s no science. You name them for whoever might leave them the most money. Simple.

If I’d ever had a daughter I think I might have named her Baggage.

BTW. We’re having extraordinarily beautiful weather here in God’s country. It’s colder than a witch’s tit but gorgeous with skies the colors of sugared almonds and the air full of frost glittering in bright sunshine. So far we haven’t lost water due to frozen pipes, knock on pugs.

Zuri is a good name, though more obscure than the others. Also, What is up with these GOP lawmakers and their wimmin problems?

The LA rape kit backlog may be explained by the fact that the cops here are too busy busting teachers and coaches for having sex with kids. In the latest such incident, the school principal had complaints about the perp for TEN YEARS and did nothing.

Has anyone seen The Invisible War? A rape kit mysteriously disappeared and then was later found, but it was too late.

@matador1015: I thought they were instructed at their latest confab to stop talking about rape.

Like that’s ever stopped wingnuts from yipping about whatever it is that’s making Jeebus cry in their imaginations before.

The most ridiculous part of all the RW garment-rending regarding the election is their conclusion that candidates who *discussed* their repellent views were the problem, not the party’s actual repellent views – essentially blaming MARKETING for the continuing drop in shit-sandwich sales.