Stinque
Home Latest Comments Log in
If it smells, we’re on it.
Stinque
Mastodon: @stinque@mas.to
Dogs Walk Among Us

Because Nothing Else Seems to Be Happening. 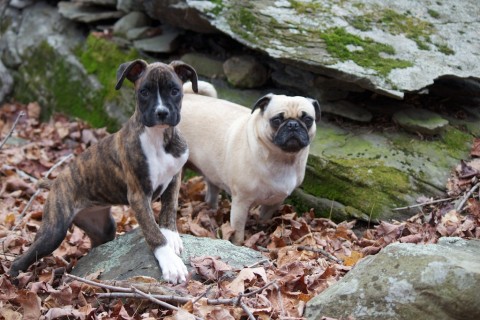 Rosie and Penny the Miracle Pug congratulate you  dear sweet funny people for yet another year  of trenchant fun.

Of course we couldn’t do it without noje. I’m not sure that’s a good thing.

Okay, nojo. If Benedick gets to put photos of his pets all over the place (which I like), I think we should get to put photos in the comments. Like once a month or something. I mean, once a month? C’mon! I mean, pretty please?

TJ/ Anyone with tomorrow off plan to volunteer somewhere? I just paid my dues submitting apps to the local library so I can tutor those wildass kids I saw when I was dropping off my apps. Sweet darlings. Instead, I might opt to teach a computer class or prepare folks for the naturalization exam. Weird thing — the criminal background check seemed pretty lax. That’s a little scary.

I’m not doing anything of importance tomorrow besides playing, “Where did the cat piss or shit last night?” (He alternates.)

nojo — I should be allowed to put up pictures of Baxter in the woods.

Benedick, I’ll send him to you on Tuesday so you can put up pictures of Baxter in the woods.

If you want to, check out this video of my nephew skiing. We got him a GoPro Hero 2 camera for graduation, and he clearly know how to use it – here his friend is shooting.

@JNOV: my 18 year old cat now climbs into the box and pisses out the entrance – had to put down a wee-wee pad. She never missed before. Wondering why … confused? Her vision seems OK, and she’s slower, but still healthy. We had her checked for UTI, but she doesn’t have one. Someone on the internet said they pee other place because they associate the box with the pain, but … I don’t get it.

Baxter isn’t my cat for real (yet?). He’s more of a house guest. He’s a house cat, and his old person is an asshole for moving and leaving him. Even before he moved, he neglected this cat. Poor kitty is used to being left outside because of his shitty former person. It’s just too cold for that. And mean. I really hate that guy.

I’ve noticed that when he does pee somewhere other than the litter box, it’s where Jr or some dude has been. Last night, he peed on the air mattress Jr was using. He’s peed in the box, but I have to scoop it a ton b/c of the wermz. He’ll be straight within a week, I think.

In the past, Jr lived with me, so our cats knew we were there first. This time, I let the cat come in before my kid had come to visit. Baxter was here first.

So, I’m giving him the benefit of the doubt. Maybe he didn’t want to use the litter box because I hadn’t scooped it for the millionth time last night. Maybe he’s marking. He hasn’t been neutered yet, so who knows.

Old, neglected, sick — I’m not going to get annoyed with him until he’s in better shape. And then I ‘ll just pull out Nature’s Miracle.

@JNOV: neutering should fix most of that.

I went to visit my BF’s family (old BF) in Iowa. His brother and sister-in-law brought their dog. Nice kind of hound dog mutt dog dog. Old BF’s sister-in-law kept yapping about the dog saying it was their baby. I said, “He has his mother’s looks.”

Yes Benedick, this is sport. Congratulations to the 49ers and Ravens for making it to the Super Bowl. Amazing success story for the Harbaugh family with brothers coaching against each other in the USA’s biggest sporting event.

Rosie is beautiful! And Penny of course as the Miracle Pug is in a class by herself.

@blogenfreude: Cats can get a bit vague as they age.

@blogenfreude: It might, but the older the cat the less likely it is to make a difference. Once a dick, most usually always a dick.

@JNOV: I have yet to see a comment thread survive the addition of images. Starting with Gawker’s.

@nojo: True. But we’re better than Gawker. Just start another Stinque Jam? I know FB has made them somewhat obsolete, but maybe this is a happy compromise? Can one compromise with God?

@karen marie might be peeking just a little: Yep. And you won the blurb!

Well, Bill is looking natty in his houndstooth scarf. (Wake up, Nojo, we need a post so we can live blog this mother!)

@flippin eck: I just woke up. Will get to it.

And Jill picks up the big-ass bow mantle where Aretha dropped it four years ago.

@SanFranLefty: You missed the guy in the Niners cap on the podium.

Still not resolved to like her new bangs, but I would cut a b*tch for Shelley’s coat. Vast improvement on that mustard number last time!

@flippin eck: Thread is open. I don’t like the bangs. Love the girls’ purple coats.

Barack H. Obama? Did he downgrade the Hussein last time too?

America knows I’m on Tralfamadore until 10am Pacific.

@blogenfreude and Karen Marie: Baxter is on his way to be fostered until he’s adopted, and all of his medical issues will be addressed by a local shelter. The foster family might keep him. Jr. sez to adopt a cat from death row when it’s time for us to get a new kitty. It’s just not time right now. Smart kid.