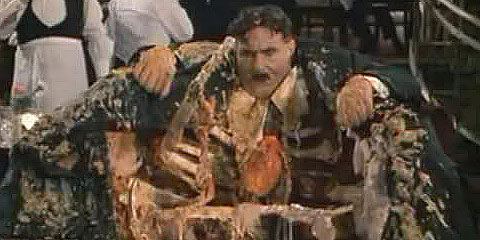 Our guest columnist insures this website. Maybe. Hell if we know. Ask the client who made us buy business liability.

Coverage for acts of terrorism is not excluded from your current policy. However your policy does contain other exclusions which may be applicable, such as an exclusion for nuclear hazard.

There is no separate premium charged to cover insured losses caused by terrorism. Your insurance policy establishes the coverage that exists for insured losses. This notice does not expand coverage beyond that described in your policy.

THIS IS YOUR NOTIFICATION THAT UNDER THE TERRORISM RISK INSURANCE ACT, AS AMENDED, ANY LOSSES RESULTING FROM CERTIFIED ACTS OF TERRORISM UNDER YOUR POLICY MAY BE PARTIALLY REIMBURSED BY THE UNITED STATES GOVERNMENT AND MAY BE SUBJECT TO A $100 BILLION CAP THAT MAY REDUCE YOUR COVERAGE.

Good to know. I would think that Stinque World Domination HQ would be high on any self-respecting terrorist’s hit list. I hope they don’t know about Shakespeare’s Pub down the hill.

@Dodgerblue: Shakespeare’s policy is suspended during the World Cup.

@nojo: The King’s Head pub, down the block from me, same. Bangers and mash, blood sausage . . . we should invite Benedick there for a pint, knowing how fond he is of the English.

@Dodgerblue: I just hope the paltry $100 billion cap on the government’s share of nojo’s insurance will be sufficient to cover potential damages to the SWDHQ. Our fearless leader does have certain standards that outshine those of a Bond villain.

Here’s what I’m actually curious about…

The Terrorism Risk Insurance Act (TRIA) is a United States federal law signed into law by President George W. Bush on November 26, 2002. The Act created a federal “backstop” for insurance claims related to acts of terrorism. The Act is intended as a temporary measure to allow time for the insurance industry to develop their own solutions and products to insure against acts of terrorism. The Act was set to expire December 31, 2005, but was extended for another two years in legislation in December 2005, making the new expiry date December 31, 2007.

@nojo: You can think of it as the Taxpayer-Subsidized Excess Insurance Policy For Rich Guys Who Own Big Terrorist Targets Act of 2002. Don’t get me started about how the nuclear power industry in the US is subsidized by you-know-who rather than have electricity ratepayers foot the bill for higher-than-sky-high insurance premiums for the nuke plants.

@Dodgerblue: I was just thinking there should be a “Your Tax Dollars at Work” sticker on milk jugs and gas pumps.

@nojo: It’s funny how many champions of capitalism are OK with having the government socialize their costs.

@Dodgerblue: And then keep it on the down-low. The oil companies are more than happy to display taxes on their gas pumps, and my SDGE bill itemizes surcharges, but not subsidies for the nuke up I-5.

@nojo: SDG&E wants to start that sucker back up. Vibrating tubes, you say? We’ll tune them to play “Inna-Gadda-Da-Vita,” no problemo.

I want to punch him. In the smugness.

Legal opinions, please?
Can I get my 1/6th acre insured in case I’m targeted for potentially supplying fresh fruit for the troops from May thru July, and weapons-grade Habaneros thru November annually?

@Dodgerblue: All those damn tree-huggers trying to shut down the nuke plants… ;-P

@nojo and Dodger: Are you talking about San Onofre? Nice warm water there.

Oh, wow. I didn’t realize it had been shut down. I think there was a huge fish kill when I was at Pendleton.