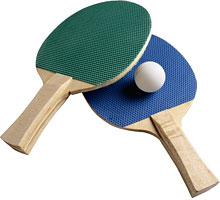 “I’ve heard of people being killed playing ping-pong — ping-pongs are more dangerous than guns,” he said. “Flat-screen TVs are injuring more kids today than anything.”

Seven people died playing ping-pong in Germany from 1997 through 2006. Cause of death is unknown.

But you see, the Ping Pong association and TV Makers of US Amercia (are there any left?) don’t pay like the NRA pays.

@ManchuCandidate: Philco’s long gone, but their TV looks straight out of the Jetsons.

Why hasn’t the Teaparty – run House voted to arm our troops with ping pong paddles and balls? Shouldn’t we equip our brave men and women with the deadliest weapons available?

No wonder right wingers are so worried about China.

@flippin eck: I was hoping for a Michelle Malkin reference but maybe that was Brand W that always connected her with ping pongs.

I belive that was TommmmCattttttt

@flippin eck: @SanFranLefty: yes, that was me. It’s a filthy and somewhat racist joke, but I stand by it. It’s Michelle Malkin, after all.

@Tommmcatt May Just Have Some MJ In His System As Well, So What?: Thwack! Pfffhhleptht! Slurp!

/damn, I am going to hell, but luckily Tommmcatt May Just Have Some MJ In His System As Well, So What? will be there to spoon with me and keep me warm by the flaming lake in Hell.