Stinque
Home Latest Comments Log in
If it smells, we’re on it.
Stinque
Cassandra was right.
mmmm muscles

Politics is not Sport 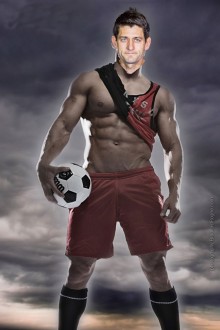 There is no Team Romney, Team Obama; it’s not a knockout or a horserace; its not about performance (as the actress said to the bishop); it’s not about first round/first base/winning the spread (whatever that means). It’s not bouncy ball, or spandex, or plastic cups. It’s not who’s butch and who’s the bitch.

I’m not making bets and I’m not laying odds. I’m also not watching this ‘debate’. I don’t care which of them can preacher-curl the most reps (shocked I know that, right? Let me tell you I’ve curled a few preachers in my day).

I want them all to STFU. Our most brilliant and accomplished president in years is trashed by the likes of Steve Kroft and David Gregory. We are supposed to care what Eleanor Rigby thinks (is that her name? married to Greenspan? Osteoporosis?)

I don’t say yet a plague on both your houses. But I’m not far off.

Not because I’m too trivial to comprehend – after all I am the inhouse necktie expert – but because the politics and public debate are trivial beyond belief. And I’m tired. No. I’m exhausted. You think it’s easy carrying around this great burden of talent? It’s a responsibility. As I was saying to Barbara Walters I like 3 reps with no more than 95lbs on the rack for squats. It’s all about form. I need the burn right up in my ass, please no photos…

Come now, darling, You’re at least curious about how turned out, aren’t you?

@Tommmcatt May Just Have Some MJ In His System As Well, So What?: You know she is curious. I am curious as to where Sister Benedick found that picture of the hawt soccer player.

You know what I want Obama to note in the upcoming debate? I want him to note the disconnect between the Ryan/Romney claim that:

1) Raising taxes on high income earners will barely make a dent in the national debt, even if you were to tax every cent they earn.

2) There is enough money to be found by closing deductions for just upper income earners to close a 5 trillion dollar gap that would result from an across the board 20% tax cut.

You simply cannot hold both positions simultaneously. But of course, the Romney campaign does. Just another way they are playing fast and loose with the numbers.

@Serolf Divad:
I think this one is supposed to focus on Foreign Policy.

@ManchuCandidate: The next debate (the town hall) will cover both and the last debate will focus on foreign policy.

@SanFranLefty: That is a candid, entirely not photshopped image of congressman Ryan engaged in Sport in one of those rare moments when he is not leading the country or procreating in some manner that upholds his 1st amendment rights.

/the greatest event in television history/

I’m in SF today, but no Lefty. I understand that there are bars here, bars where a person might watch a baseball game.

@Dodgerblue: Mostly in the Castro. So I’m told.

@Benedick: Maybe I can get some assless chaps made from the hide of a grass-fed, antibiotic-free cow that died a quiet death, surrounded by family and friends, after a rich, fulfilling life.

@Dodgerblue: What are you talking about, no Lefty?! You have to warn me about these things. Where in The City are you and I can recommend a bar. Hell, maybe I could even meet you at one.

@Dodgerblue: Sounds like a plan. Just walk down the street till you a pass a place with really loud disco blaring. Inside, head for the back. You’ll find a very dark room where they keep the TV. Lefty will back me up here.

@Benedick: Sadly, that fire-hydrant-sized guest star doesn’t make an appearance. HOWEVER! You do get to see him stripped down to his boxer briefs.

@Benedick: @Dodgerblue: You should maybe have a hot bath and a glass of wine before you go in, Dodger. Word to the wise.

@Tommmcatt: Some light kissing and rubbing in all those special places also helps prior to the main event. Visiting the bar, I mean.

@Tommmcatt May Just Have Some MJ In His System As Well, So What?: A perhaps a wee bite o’ some special muscle relaxing pill.

@¡Andrew!: @Benedick: Ah, you both went there. I was scouting the outer rings, but true to form you guys went for the bullseye, so to speak.

I’ve never been prouder to be a part if this site. Kudos, gentlemen.

@Tommmcatt May Just Have Some MJ In His System As Well, So What?: Well, nothing very exciting happened to me — a late flight from SFO isn’t newsworthy– but why am I seeing a Romney-Ryan not MSNBC ad?

Re: the not-MSNBC ad – here’s what was showing for me:

Apparently Mittens has now decided that literally everything he and the Bain boys did was terribly immoral, since it *always* involved “spending more than [they’re] taking in”. Better hope nobody reminds the wingnuts what Raygun’s spending-vs-intake record was…