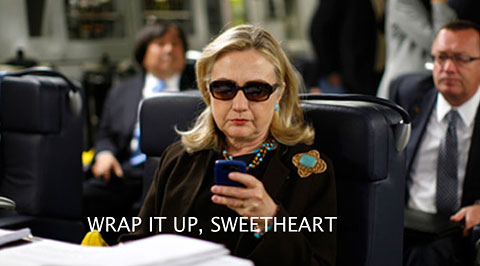 That text also applies to the “See Sarah Palin Live!” conference that just popped up in the Not-The-MSNBC-Ad space:

Fun fact: their “deadly accurate” forecaster has been predicting hyperinflation ‘just around the corner’ since at least 2009 – so on the upside, every wingnut that listened to him has probably lost a shitload of money…

@al2o3cr: That would include my barber. Nice dude, but I have to sit through a half-hour of Socialist Armageddon every time I get a haircut.

@Dodgerblue: Barry’s been sitting on an electoral landslide all year. Normally I would worry about get-out-the-vote, but I’m really worried about voter suppression. The only way for Mitt to win is by theft, and theft might be how he does it.

@nojo: They do have a history of that.

@Dodgerblue: Ever the pessimist I roll up into a ball when I see things like this.
I don’t know if they factored in theft.

Their model correctly predicted all elections since 1980

Except that it didn’t. It’s a classic case of rigging the model to account for arbitrary judgments — ex post facto, since the model didn’t exist in 1980, but is brand new.

This is why, with all due respect, I don’t care for Nate’s models. You can be as conscientious as you’d like, but you’re still cherry-picking data, and politics doesn’t offer the consistent data over time like a controlled game that operates within stated rules. In politics, it’s all asterisks.

@nojo: Yes. I didn’t have to dig too far find the Berry Bickers model called out for misleading advertising. These predictions, depending on which side one is on , are like a shot of whiskey or valium, or both

When I looked at Silver yesterday, he had Pennsyltucky solidly Dem, with VA, Ohio (or was it?) and Fla. also with the Ds. I worry greatly about limited turnout in Philly (baseball season over, Vick will be injured, voter supression, etc.) where there be monsters which is the heart of the Democratic vote in the state, and doubt greatly the ability of Va. and Fla. to both flip for Barry.

@nojo: I remember Nate had some wildly inaccurate models for the 2010 British General Election, where he had at one time the Liberal Democrats gaining more than 100 MPs. He was really, really out of his element there.

Remove the statistical ties, and you see the base: Mitt can’t consistently break 200, and Barry floats around 250 — all since mid-April, after Frothy quit and the coast was clear. All Barry needs to do is grab a couple of tossups. Mitt needs all of them.

Y’all are invited to the election night party at my house. There will be Bushmill’s.

@Dodgerblue: I promise that I will get extremely shitfaced on election night in order to deal with the tension and anxiety.

@rptrcub: And then there’s InTrade, which everybody cites, and everybody forgets is just a running score of conventional wisdom. Might as well count tweets.

Even the polls themselves are notoriously fickle: Who has a landline? Who answers it? Who counts as a “likely voter”? The “raw data” is heavily massaged with best guesses even before it goes into a model.

The site I like to follow simply averages all state polls within the past week, and (much more importantly) runs a chart over time. It’s prey to the same issues as any other polling aggregator, but at least it doesn’t add to them.

@Dodgerblue: I’ll be on a plane flying back from London on Nov. 6. Hope it has wi-fi or I will be a wreck.

ADD: Of course, if I do have a connection but things are going badly, I will be drunk and hysterical, which should make going through customs fun.

@nojo: Which site is that?

@rptrcub: Electoral-Vote.com. I should put in the sidebar menu.

The homepage is good for a snapshot, but the graphs tell me what I need to know.

As they did in 2008. Yoda Pez didn’t pull his insights out of his plastic arse.

@nojo: Nate is, however, transparent as to when and to what extent he puts his thumb on the scale.

@nojo: Ah, ok. That’s the one I like to look at as well. Especially with the option to take Rasmussen out.

@rptrcub: I tried that option awhile back, but I decided to ignore it — much like the Obama Campaign shaves two points off internal polls so they don’t get cocky. If he’s doing that well with Rasmussen, we’re in good shape.

@mellbell: Sure, Nate’s transparent. But his models still distract me, since they incorporate presumptions I’m not comfortable making. I don’t care whether he nails the final count — I’m much more interested in the trend over months, because that’s the story that informs my judgments.

For example: You could see McCain’s desperation in the weeks leading up to the Palin choice — he was tanking. And because he was tanking, you could dismiss any immediate bump following her convention speech. The only question for me back then was whether there would be enough time for the momentary excitement to settle down, because the long-term polling was clearly and strongly in Obama’s favor.

And now, with the conventions all but in the can, and the debates to come? Voter supression really concerns me. But that’s it.

@Beggars Biscuit: Romney and Team Billionaire have pulled advertising from Michigan and Pennsylvania — meaning, Lost Cause for them. So you can forget that worry, at least for now.

@nojo: Interesting that it was really the second Swift Boat ad that did Kerry in, not the first one. I can’t for the life of me recall when Windsurfing Ad aired, but he never recovered after failing to punch back.

@Mistress Cynica: If you are still airborne when the contest is called – and flying a US carrier – I have no doubt the pilot will announce the results. A comparative analysis of First, Business and Cattle class reactions would be very interesting.

@nojo: Plenty of time to throw up Koch Family movies in October, don’t you think?

@Mistress Cynica: If you’re going to London pack lots of money. Also toothpaste. If you have time go to St Paul’s. You can climb right up into the pepperpot on top of the dome. No one knows this. Heathrow makes me think of the fall of Saigon. My friend knows a fab car service that is ₤25 to Heathrow. This is nothing. A bottle of water in a restaurant is ₤8 (demand tap water). The only bargain I could see is champagne. So I suggest you drink lots of it. If you have time for a side trip? Brighton. Longer? Bath. The train is quick but has been utterly Monty Pythonized.

@Beggars Biscuit: Sure, they can change their minds — but Turdblossom has been deluging PA all summer, with no results. They’re not throwing good money after bad. For now.

And Kerry? Pisspoor campaigner, like Al, with “Reporting For Duty” being one of the best bad-faith howlers in recent memory. It’s fair to say Swift Boat #2 sunk him, but that chart is a mess. I kept peeking at it during 2008, thinking that’s what a close race looks like.

Makes a nice baseline, however. Now isn’t then.

I suspect the Kochs and their bajillionaire buddies are going to feast on Akins political career carcass for a long time.

Not counting statistical ties, Mitt can depend on about 200 votes. And, right now, there are 106 votes in play. (Most leaning toward Barry, but never mind that.)

So, Mitt needs 70 votes over his base. That would be every state in play except Florida — which is 29 votes. If Mitt loses Florida, his chances of winning the election drop to near zero.

That’s the conclusion I read elsewhere the other day, and looking at the chart, I can see why. Obama can afford to lose Florida. Mitt can’t.

@Benedick: Going on business, but still expect to eat lots of overpriced pre-prepared food from Pret-a-Manger and M&S. Will be spending most of my time at Chelsea book fair. Maybe a day trip to Jersey to visit a client. For some unknown reason, my boss uses Heathrow, which I haven’t set foot in since 1975. If you could get the name of the car service it would be fab. I’m packing with an eye to having to schlepp my suitcase on the bloody Underground.

@nojo: Yoda Pez didn’t pull his insights out of his plastic arse.

Oh, and my ballot arrives in the mail. Wonder if return envelope postage is prepaid. Probably.

@JNOV: Not even gray.

@Mistress Cynica: We have Pret in DC now. It takes enormous willpower not to go there for lunch everyday.

@JNOV: In Orygun you have to pony up postage or take the envelope to a designated drop. SInce I live blocks from the county clerk’s office, I just take mine in.

@Mistress Cynica: I will get instanter. The underground to Heathrow is 18 quid. The drivers are mostly Iranian surgeons trying to get by. The 25 includes tips.