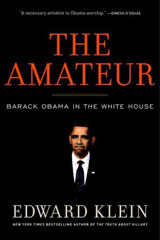 Blurb: “In this stunning exposé, bestselling author Edward Klein — a contributing editor to Vanity Fair, former foreign editor of Newsweek, and former editor-in-chief of the New York Times Magazine — pulls back the curtain on one of the most secretive White Houses in history. He reveals a callow, thin-skinned, arrogant president with messianic dreams of grandeur supported by a cast of true-believers, all of them united by leftist politics and an amateurish understanding of executive leadership.”

Review: “It is obvious that Mr. Klein hates Obama, his wife, his children, his dog and everyone in his administration.”

Customers Also Bought: “Obama’s America: Unmaking the American Dream”, “The Roots of Obama’s Rage”, “The Great Destroyer: Barack Obama’s War on the Republic”, “Fool Me Twice: Obama’s Shocking Plans for the Next Four Years Exposed”, “Culture of Corruption: Obama and His Team of Tax Cheats, Crooks, and Cronies”, “Leading from Behind: The Reluctant President and the Advisors Who Decide for Him”, “Crimes Against Liberty: An Indictment of President Barack Obama”, “Blacklash: How Obama and the Left Are Driving Americans to the Government Plantation”, “Gangster Government: Barack Obama and the New Washington Thugocracy”, “Conduct Unbecoming: How Barack Obama is Destroying The Military and Endangering Our Security”, “Spreading the Wealth: How Obama is Robbing the Suburbs to Pay for the Cities”, “Fast and Furious: Barack Obama’s Bloodiest Scandal and the Shameless Cover-Up”, “Radical-in-Chief: Barack Obama and the Untold Story of American Socialism”, “The Brief Against Obama: The Rise, Fall & Epic Fail of the Hope & Change Presidency”, “Trickle Down Tyranny: Crushing Obama’s Dream of the Socialist States of America”, “The Blueprint: Obama’s Plan to Subvert the Constitution and Build an Imperial Presidency”, “Mugged: Racial Demagoguery from the Seventies to Obama”, “Trickle Up Poverty: Stopping Obama’s Attack on Our Borders, Economy, and Security”, “The Obama Confession: Secret Fear. Secret Fury.”, “Injustice: Exposing the Racial Agenda of the Obama Justice Department”, “The Manchurian President: Barack Obama’s Ties to Communists, Socialists and Other Anti-American Extremists”, “The Corruption Chronicles: Obama’s Big Secrecy, Big Corruption, and Big Government”, “No Higher Power: Obama’s War on Religious Freedom”, and “The Real Romney”.

Footnote: Wingnut Obama is the greatest literary creation of our time.

And I thought the vast wingnut conspiracy against Bill Clintstone was a great waste of trees.

Wait till the first lady preznit. The yelling and bitching will be just as bad.

When I see a book shelf that contains JUST crap like this, the collected works of John Stossel, a couple of Ayn Rands and MBA texts I run for the hills AND automatically dismiss the person as a completely useless incompetent dunce. So far I haven’t been proven wrong (small sample size.)

ETA: I suspect the author did a search/replace Bill Clinton with Barry Obamer because I remember reading the exact same thing written about him. I know because I bought the fucking book (to my everlasting shame.)

@ManchuCandidate: In my various journeys in chatting online with people, I had the misfortune of running upon someone who bragged in his profile about the last book he read being Atlas Shrugged and enjoying said book. And there was another line on there whining about how nobody would talk to him.

Also, I admire our dear ¡Andrew! for going for his MBA because I would throttle the classmates I just *know* I’d have in a program down here. The MSIS was enough for me with plenty of Randian disciples.

The last Paultard I met (and this is in Canada City) I wanted to punch (was at a singles event.) Fortunately, I cockblocked him and ruined his chance with a female by being a really annoying asshole (sadly, there isn’t much difference between me being an unintentional one and an intentional one.)

He reveals a callow, thin-skinned, arrogant president with messianic dreams of grandeur supported by a cast of true-believers

Wow, it really is always projection with the right wing, isn’t it? Right up until the clause that followed this one, I was sure the book was going to be about how we managed to flush a trillion dollars down the toilet with Shrub and his wars…

The cartoon’s better than the movie.

@nojo:
It is a movie M. Night Shamalan should direct.

Quite a career trajectory for Klein: from Newsweek to Regnery Press.

@texrednface:
Similar to the swirling of a toilet bowl?

@ManchuCandidate: Except in GOP Physics, it swirls back out at you.

Hacks gotta hack. I wonder if in his secret heart of hearts he thanks God for Obama and the bounty of idiot book purchases his existence has enabled? Tabloid-level journalists are capable of self-awareness in my experience.

@ManchuCandidate: @Tommmcatt May Just Have Some MJ In His System As Well, So What?: Actually, they’re all pissed that they had to rewrite the Hillary books they had prepared in 2007.

And remember that wingnut book sales figures are inflated by various conservative “think” tanks buying the book by the gross.

At least L. Ron’s novels, however crappy they may be, are sometimes entertaining.

It is ironic that the biggest defender/whores of the Free Market are unable to win in the “free market” of ideas they blather on so much about and have to use the invisible hand of subsidies to prop up their pathetic sales.