Stinque
Home Latest Comments Log in
If it smells, we’re on it.
Stinque
Cassandra was right.
Kah-lee-fornication

Maybe Smithers Could Be The Timekeeper 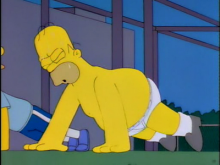 Not one, but two political stories involving running:

California Governor Jerry Brown was not thrilled with Chris Christie’s “old retread” insult at the Republican National Convention, and challenged Christie to a fitness contest.

“There’s nothing wrong with being a little retread. I don’t have as much hair, and I’m slowed down a little bit, but I’ve got to tell you, I ran three miles in 29 minutes two nights ago. I hereby challenge Gov. Christie to a three-mile race, a push-up contest, a chin-up contest,” Brown said. “And whatever he wants to bet, I have no doubt of the outcome.”

And each of those dollars is a person, my friends.

Below $100 sure thing for me, the money’s not worth my time.

Fuck the feds. Fuck those goddamn wimps with a rusty chainsaw.

@TJ/ Jamie Sommers /TJ: Weak sauce. And they know it, issuing the press release at five on a Friday.

@TJ/ Jamie Sommers /TJ: I assume Sheriff Joe has a photo of Janet Napolitano doing the nasty with Dora Shriro. There’s no other explanation.

Thank the Flying Spaghetti Monster for the amazing, awesome, wonderful people who do the Goddess’s work at the ACLU of Arizona.

@RevZafod: Oh, and you’re so on. I’m on Moonbeam’s side, verdad? And yes, we can trust bloggie or nojo to hold the money.

That’s not a challenge, it’s a death threat. Christie would have a massive coronary before he’d made it a mile.

Does Christi get at least a 2 3/4 mile head start.

Since Christie won’t fit into a NASCAR vehicle, I imagine the only way he’ll race is in a monster truck. Right-thinking Republicans (I know, redundant) burn fossil fuels, not carbs.

Christie Chin up? Which chin?