Swing and a Myth 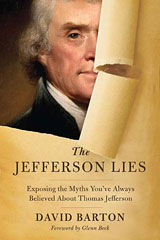 Blurb: “America, in so many ways, has forgotten. Its roots, its purpose, its identity — all have become shrouded behind a veil of political correctness bent on twisting the nation’s founding, and its founders, to fit within a misshapen modern world.”

Review: “So many scholars found factual errors with the book that on 8/9/12, the publisher ceased publication and distribution of the book, and is actually recalling it from retailers.”

Footnote: “David is author of numerous best-selling works and a national award-winning historian who brings a fresh perspective to history.”

The author’s blurb should read: “David is author of numerous best-selling works (if you count RW think tanks as readers) and a national award-winning historian in his mind who brings a fresh make believe perspective to alternative history.”

In the wonderful world of irony… Mittens asks for several years of tax returns for VP vetting.

Conservatives making up history to suit their world view? Say it isn’t so!

No one can argue that the book isn’t aptly named.

In David Barton’s universe, Spock is the one wearing the Evil Goatee.

This Virtual Certificate Is To Acknowledge That Cynica and I Have Successfully Completed a Shakespeare’s Stinque-Up, and That I Am Two Pints Ahead of The Day.

@nojo: Van driver was not a serial killer. I’m safely at the airport.

@Mistress Cynica: Did you finally get that ice-cold martini you earned?

@Benedick: So I heard.

@SanFranLefty: A beer, but yes, much needed. This is one of the few times I’ve enjoyed being in an airport because it’s apparently the only place in the whole bloody town that’s air conditioned.

@Mistress Cynica: Dear oh dear. The squalor that is Sandy Eggo. It’s Jacksonville without the glamor. Port au Prince without the infrastructure. Wassila without the culture. I just hope you’re not wearing Birks.

@Benedick: I always thought it was the fifth sample or formula. Non?

@Mistress Cynica: Kinda. According to Diana Vreeland – just about the most unreliable narrator ever but her auto is packed with amazing details of a kind of demi monde in Paris in the 20s and 30s, e.g. Wallis Simpson being given clothes free by the great houses to wear to parties, also Vreeland – Coco, a woman of great brilliance and scary business acumen, realized that the way to make real money was to create a brand name and then cash in. So she hired a parfumier to create a perfume for the house. He made lots of samples and gave all kinds of nonsensy accounts of what they were: notes, accents, prevailing, etc. Madame Chanel had him put his samples on clean linen handkerchiefs arranged on her mantlepiece. She came to the fifth hanky and declared c’est ça: hence Chanel #5.

Thank God you’re leaving that hell hole. I’ve been on my knees morning noon and night. I’ve also been praying.

Athletes from Angola have iPads, while the Americans and Chinese only have large medal disks around their necks.

@nojo: Tempting. So sorry to have missed that. Enjoyed the beer, though.