Stinque
Home Latest Comments Log in
If it smells, we’re on it.
Stinque
Assholes, they do vex us.
2012 Elections 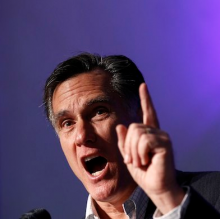 But Romney’s campaign announced Saturday that it would block the news media from covering the event, which will be held at the King David Hotel [in Israel]. The campaign’s decision to close the fundraiser to the press violates the ground rules it negotiated …

But look at this dancing horse!

A  Closed Mouth Gathers No Feet [His Vorpal Sword]

Obama needs to hit this hard: “How can we trust a man to deal with complex foreign policy when he is so gaffe-prone he has to ban the press from his speaking engagements?”

Best bit from the linked article in the WaPo:

Some of Romney’s Jewish donors are flying here from the United States to attend the Jerusalem fundraiser on Monday morning, including Las Vegas casino mogul Sheldon Adelson, who has pledged to personally give tens of millions of dollars to a pro-Romney super PAC.

Ol’ Sheldon is really working hard to be the first asshole tossed in jail for breaking the embarrassingly weak post-Citizens United campaign finance laws, isn’t he…

The guy spent 8 years prepping to be preznit. You’d think he’d at least get his shit together.

Probably thinks like a typical CEO/born rich guy (I’ve known both) who think that the details just work themselves out and he doesn’t need to do anything except show up.

New link – now he’s going to let the press in …

I’ve stayed at the King David. Note to Mittens: the shabbas elevator stops at every floor by itself. Don’t report it as broken. Don’t ask for a cheeseburger in the dining room. Don’t ask the young IDF kids why they enlisted.

@Dodgerblue: Your favorite soccer hottie Hope Solo is in a bit of a pissing match with another soccer hottie, Brandi Chastain. Speaking of soccer hotties, who the hell designed the US women’s national team’s red-and-white horizontal striped jerseys? I thought the skin-tight cropped jerseys they wore during the women’s world cup were bad, at least these are cut so they can run and jump and move, but they look like they’re extras from “Where’s Waldo?”

Note to self: Do not go to nytimes.com if you don’t want the outcome of Olympics matches spoiled for you before you can watch them on tape delay on NBC. I will give my local fishwrap credit for not putting the results on the main page, and warning “Spoiler Alert” above the links to the results.

@SanFranLefty: And what’s up with Kerry, Misty and company wearing a t-shirt and bikini bottoms to play in? Who thought that one up? I watched the US water polo match and those guys, at least, are still going with Speedos. I have a pair of Speedos around somewhere; I’ll bet I couldn’t get a leg into them now.

@Dodgerblue: OMG, I was almost falling off the treadmill at the Y this afternoon, I was so swooning over those Uklah and Stanford grads on the water polo team. Home boy kicked himself up to waist-level on the water and slammed in a point. Can you imagine the thighs and glutes to get yourself up to that level when treading water? I had the passing thought that I need to start a series called “Olympic Hottie of the Day” here at Stinque. I’m sure you would approve, I just need to check with the Hamster in Chief.

I was glad to see the beach v-ball chicks wearing clothes again – I wish they would put on shorts or pants again. Playing volleyball takes real skill but the absurd uniforms of the past 10 years have totally marginalized the sport.

@Dodgerblue: @SanFranLefty: Speaking of fashion, check out FLOTUS shutting it the hell down in London. She’s letting just a hint of gray show in her hair. Luv. Huh.

@Mistress Cynica: I’m not in love with that top, but she pulled off the look. That close-up was gorgeous.

I’m a big fan of what Cathy Cambridge wore to hang out with the soccer players. Above the knee, no less.

@SanFranLefty: I love the top because it looks like an incredibly chic fencing vest. Lord knows whether that was the intention, but it certainly works for the occasion.

@Mistress Cynica: She can really bring it.

@SanFranLefty: You can start with those swimmers Homofascist and Cynica flagged on Facebook. Crikey! And whatever-it-is-they-say-in-South-Africa!

@mellbell: Amen. And meanwhile, apropos of nothing, $tarbuck$ wants to buy out Berkeley-headquartered Peet’s Coffee. NOOOOOOOOOOOOOOOOOOOOOO!!!!

@SanFranLefty: I heard this weekend that Peets had sold to a German company that owns a number of luxury brands.

@Mistress Cynica: The German company made an offer to shareholders, rumor has it that $tarbuck$ may match or exceed the offer. This after the McDonald’s of coffee bought out a locally-owned Bay Area chain of French bakeries.