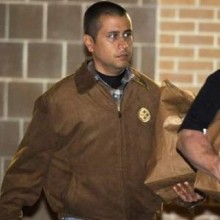 Because the god of conservatives and the GOP wants them to kill brown teenagers – from the Sean Hannity interview:

Despite the apology, Zimmerman made it clear that he didn’t regret any of his actions, because it was all divinely pre-ordained. “It was all God’s plan, and for me to second guess it or judge it…,” he said before trailing off. When Hannity asked if there was anything he’d do differently in retrospect, Zimmerman answered, “No, sir.” Later he added, “I do wish there was something, anything, I could have done that wouldn’t have put me in the position where I had to take his life.” Earlier in the interview, Zimmerman defended having a gun on him, noting that he always carried one unless he was at work.

When people walk around with guns, they will use them. God + guns = dead people. It’s that simple.

Who the fuck is representing this guy, Jerry Sandusky’s attorney?

Why would any defense attorney allow her/his client to go on teevee and say shit like that?

Saying whatever happens is “all God’s plan” is a way of giving yourself license to do whatever the hell you want.

@Jesuswalksinidaho:
Right up till something unpleasant happens to them. Then it is all “God why hast thou forsaken MEEEEEEEEEEEEEEE!”

At least he didn’t say the Devil made him do it.

Deciding to carry that weapon on that day was all part of Zimmerman’s plan. Explain THAT one you god-bothering murderer.

If that was God’s plan… God is a dick.

@SanFranLefty: To further taint the jury pool in hopes of a mistrial?

I do wish there was something, anything, I could have done that wouldn’t have put me in the position where I had to take his life.

You mean like STAY IN YOUR FUCKING HOUSE LIKE THE DISPATCHER TOLD YOU TO? Yep, absolutely nothing but the direct intervention of Sky Jeebus himself could have made that happen…

On the other hand, if this means that a loon like Zimmerman gets a nice long term in jail and some states start reconsidering the “shoot first, ask questions never” laws the NRA has bought, perhaps that’s “Gawd’s plan” – he does have a millennia-long reputation for being an unspeakable dick, after all.

@al2o3cr: I think a big part of God’s lousy reputation is based on idiots like Zimmerman blaming him for the incredibly stupid/evil/irresponsible things we do to each other and to the earth. Fortunately God’s a spiritual honey badger.