Stinque
Home Latest Comments Log in
If it smells, we’re on it.
Stinque
Mastodon: @stinque@mas.to
Aftermath 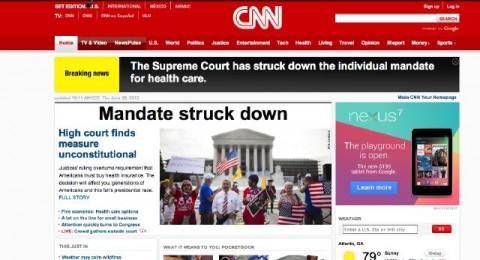 FoxLite – – it’s time to clear the deck before the entire ship sinks. Who can watch Wolfie?

CNN: the BlackBerry of news networks.

Enjoy your slow death spiral, guys. You had a nice product once, then you just let it slip. Now you’re about as cool (and relevant) as a cassette Walkman.

@Serolf Divad: They peaked when, with the Gulf War and Peter Arnett reporting from under a table? Or Christianne and Nick reporting from the front lines in Sarajevo?

OJ was the real killer of CNN.

At some point CNN became the Platonic ideal of “opinions differ on shape of Earth” reporting. That was their downfall. I don’t want to watch a news program that invites a politician on, throws him a couple of softballs, then doesn’t challenege him at all as he spends his 5 minutes spewing lie after lie after lie. The worst part is you can never really tell if CNN’s hosts don’t point out the lies because they don’t care, or because they’re so uninterested in the issues of the day that they honestly don’t know they’re being lied to.

Apparently there was a Fox Fail too. I’m sending it to Bloggie to add to his post.

An editor at The Associated Press is all butthurt at AP reporters’ mocking of CNN.

24 seconds! Wow! If I had been following Bloomberg, I would have known the news less than a half-minute before all my Luddite friends stuck with AP!

Dear MSNBC: That little blip in your overnights tomorrow morning was me (1) Turning on the TV to see what you’re doing, (2) Seeing Andrea Mitchell talking to Bob McDonnell, then (3) Immediately turning off the TV. Sorry for the ratings hiccup.

@nojo: You’re enjoying your Skynet box a little too much, but that’s the AI plan.

So, are we copping to being a wee controlling. ;-)

@JNOV: Skynet is Our Friend. And we’ve always been at war with Eastasia.

@JNOV: Also, Skynet left $200 on the dresser after they fucked the shit out of my TV on Tuesday. I may be a whore, but I have my price.

I’ll bring popcorn. That’s good for, what, three minutes? How much longer for beer? (I am not talking about the TV. Banter head off win!)

BENE! My kid misses you. (And maybe Aunty Catt.)

But the Amusement Value is Priceless. Until I get bored with it, and then I call Skynet and demand that they take their toys back home.

@JNOV: Things That Amuse Me…

1. The Skynet Box is about the size of a cable box, running Linux.

2. Instead of building various functional components into the Skynet Box, they’re connected to it using USB cables. The components are about the size of an Internet router; they’re held to the Skynet Box by wrapping the USB cables around them. (That’s the part that reminds me of Brazil.)

3. The Skynet Box is hard-wired into your TV. They have to remove the back of your TV to do that.

4. Skynet needs to know that what you’re listening to matches what you’re watching. So if you’re running your audio through a stereo (skipping the TV’s internal speakers), they also wire up one of your stereo speakers.

5. Skynet is Aware of All Television Traditions, so they also plug an audio cable into your Apple TV or Xbox or whatever. They don’t care what you watch or play — they don’t care that I’m Netflixing Arrested Development — but they do care that what I’m doing is not watching a TV channel.

6. Like your iPhone, Skynet uses a small flash-memory card to record data. When the card fills up, Skynet phones home — using a dedicated cellphone that calls a built-in number.

7. I hold the fate of Media Empires in my grubby little hands.

@nojo: So, it’s hardwired to the TV, but you can unplug the USB cables? Will black helicopters descend on you?

Dude — will everything crap out while ET phones home? The don’t use your wifi do they? Reading is fundamental.

Call it a cable subsidy. I’m on the verge of cord-cutting, but I’m addicted to the Daily Show News Hour, and the alternatives aren’t yet attractive to me: No Hulu on Apple TV, for example. Things might change with Apple software updates this fall.

you can unplug the USB cables?

If I do, the nice Retired Navy Skynet Geek will be at my door within minutes. Or a day or two.

will everything crap out while ET phones home?

That’s part of what fascinated me: I don’t have a landline, so does it use my wifi instead?

No. It literally phones home. There’s a special-purpose cellphone attached to the box: It calls Skynet directly, probably via Verizon. Or maybe it just uses mobile Internet for transmitting data. Either way, it’s not going through my wifi or wires.

Now imagine some 25,000 of these nationwide. And imagine the shitload of moolah Skynet makes off of them. They’re getting me cheap, but like I say, it amuses me.