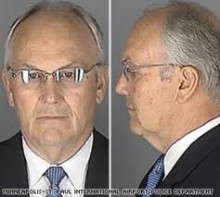 Federal campaign regulators brought the hammer down on disgraced former Sen. Larry Craig on Monday, accusing him of misusing hundreds of thousands of dollars in campaign cash to pay for his legal defense following an arrest in a Minneapolis airport bathroom sex sting.

The Federal Election Commission filed a federal lawsuit against Craig, who now works as a lobbyist in Washington, D.C., asking a judge to order the former lawmaker to pay back his campaign committee more than $200,000 and stop him from raiding the committee for his own personal use.

Thought we’d never have to look at that horrible mugshot again. On the other hand, any excuse to post this video:

I didn’t realize how much I had missed him until today.

@blogenfreude: What is he lobbying for? Restroom stalls in the lobbies?

@Dodgerblue: New requirements for male pages: less than 10% body fat, and they have to submit a headshot and picture of themselves in a wrestling singlet to be considered. A new point system will give them bonus points for demonstrated sexting messages on their phones, and deduct points for things like glasses and sweater vests.

Beat me to it. I think this pretty much proves that it’s impossible to be so disgraced a former Senator that you can’t make a killing as a lobbyist after.

@Benedick: I’ve seen Patrick Rouge v. Tyler Saint, and don’t think there was a single singlet between the two of them.

Or was that what my momma always called “wrasslin”?