We Retract the Skittles 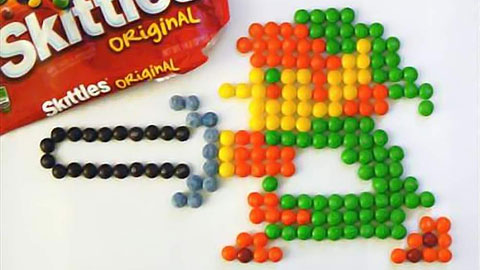 William A. Jacobson, like us a tireless seeker of truth, asks a pointed question that blows the Left’s narrative of the Trayvon Martin case wide open:

What is the source of this fact that Skittles and a bottle of ice tea were found with Martin?

We confess: When we first attempted to nail down the facts of the case, we neglected to source the Skittles. For that matter, we never bothered to confirm that Trayvon visited a 7-Eleven, and not a Circle K instead. We also don’t have an independent witness who can verify that Trayvon left home during halftime of the NBA All-Star Game, and wasn’t watching America’s Funniest Home Videos.

If, for example, evidence emerges that Trayvon Martin was packing M&Ms and a Big Gulp instead of Skittles and Arizona Iced Tea, nobody in America would disagree that George Zimmerman was both legally and morally justified in shooting him with a Kel-Tek 9mm semiautomatic handgun — just as Trayvon’s school suspension for an empty pot baggie casts serious doubt on his intentions while walking through his father’s neighborhood unarmed.

Similarly, the Shocking! revelation that Trayvon Martin engaged in Social Media makes us discount the possibility that he was defending himself against an armed attacker, and throws the preponderance of evidence in favor of a pistol-packing serial 911 caller who didn’t want that asshole to get away.

And it goes without saying that anyone who still has a MySpace account cannot be trusted.

We apologize for our Failure of Narrative. Because only one thing would provide conclusive proof of Trayvon Martin’s innocence. But he’s not White.

Let’s dwell for a minute on the name Trayvon – no doubt a name derived from a combination of two family names, as is done frequently in Southern African-American households. (That last sentenced is unsourced, BTW.)

Bearing a distinctly African-American name is just like wearing a virtual hoodie, in that people will jump to immediate conclusions upon hearing the name being spoken. The George Zimmermans of the corporate world do their best to practice discrimination against the Trayvons of the world by denying them meaningful employment and career advancement on the basis of their name.

Some of the Trayvons of the world, recognizing this, will shorten their name to conform with the one-syllable nomenclature of corporate America, thus compromising a part of their cultural identity in the process. Others will continue to wear their name with pride, while continuing to occupy the lower rungs of the corporate ladder.

It’s all clumsy slight of hand. It could have been a bag of Ruffles. The kid wasn’t a perfect one (who is?) but did he deserve to die because he wasn’t the perfect teen? No.

It doesn’t change the fact that an unarmed black teen is dead at the hands of a gung ho self appointed neighborhood watch dude and the cops quickly decided to wash his and their hands of the death without doing any serious investigation while using a very poorly written law as cover. Anything else is bullshit.

If the cops did their fucking job instead of going “meh, black kid dead” then maybe just maybe it becomes a local tragedy instead of a national debate on race relations and vigilantism and poorly written laws on self defense.

One of the things my family did was travel Florida for March Break. My dad used drive 85+ mph down I-75. I asked him wasn’t he afraid of the cops.

His answer? “I don’t care cause I don’t respect US American cops. They’re thugs.” Although I don’t know why my dad would because if the cops were as bad as he thought then why attract attention? Then again there were no reciprocal traffic ticket agreements with various states and Ontario at the time so he didn’t really care.

That shocked me because my dad was such a hard ass about integrity and honor and respect for the law. Knowing more about my dad’s background and US America race relations history, I can understand why now.