Stinque
Home Latest Comments Log in
If it smells, we’re on it.
Stinque
Winston loved Big Wordle.
Everything You Know Is Wrong

With or Without You 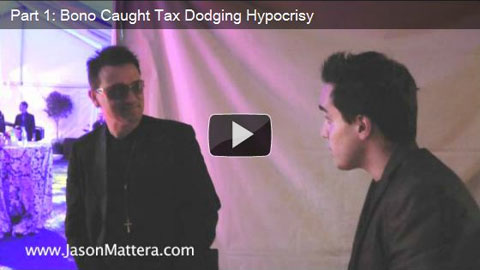 Our guest colloquists are Boy Gonzo Jason Mattera and “Bono”, a purported member of a popular music group. Before enjoying the exchange, please note the following update posted on Glenn Beck’s Blaze website:

Editor’s note: The original Breitbart.com story has been removed and the Jason Mattera videos have now been moved to “private” on YouTube. There is widespread discussion on Twitter that the person Mattera interviewed in the videos may have been a Bono impersonator.

We now join our Youthful Muckraking Hero and Not Bono, already in progress.

Mattera: By dodging taxes on royalties are you raiding the poverty programs you purport to champion?

Mattera: No? Don’t you want governments to be generous with other people’s money and not yours?

Bono: I don’t have control over that…

Mattera: How do you not have control over that? It’s your company. Are you not in charge of your own company?

Bono: It’s not my company.

Mattera: You have no say in what U2 does?

Mattera: You don’t? You don’t have a say in what U2 does?

Mattera: You’re the front man of your band, which has made you hundreds of millions of dollars… you have no idea why it moved from Ireland to Holland?

Mattera: It wasn’t take advantage of a much lower tax rate?

Mattera: You are seriously going to say that you don’t have that answer?

Updated (Story Pulled): U2 Singer Bono Grilled on Camera Over Band’s Move to Avoid Taxes [The Blaze, via Media Matters]

As punishment he should be forced to attend Spiderman.

He can’t find what he’s looking for.

This interview: Even Better Than the Real Thing.
Where was Bono? Gone.
How did we hear of this colossal fuck up? Mysterious Ways.
How would we grade this, 1 being the highest? One.
How do we feel after watching? Magnificent.
What did Matterra get out of this? Crumbs from Your Table
At what point did he think he should give up? Moment of Surrender.
What did he experience upon finding out about the imposter? Vertigo.
What should he do next? Walk On.

@ManchuCandidate: Makes me think of “Broken Arrow” by Robbie Robertson from back in my law school days.

Things are forever on the internets.

And this dick is one who mocked someone (as I recall) who asked him why he wasn’t fighting his party’s war in Iraq instead of being a Keyboard Kommando.

The point of interviewing a look-alike is that they actually look like the person you would be interviewing if you were not such a peon and nobody.

How stupid do you have to be to try this out anyway? The real Bono might just be annoyed to the tune of a real lawsuit.

ADD: Let’s dress me up as Rush Linbaugh and I’ll admit to sex with an adolecent donkey.

@redmanlaw: I never noticed this before, but young Bono looked kind of like a drunk sweaty Justin Bieber with mussed up hair.

U2 are assholes:
http://en.wikipedia.org/wiki/Fair_Use:_The_Story_of_the_Letter_U_and_the_Numeral_2
Bono-bo blamed it on the label then; he had nothing to do with Negativland’s legal problems. Right.

Love that track – “these guys are from England and who gives a shit”, the Weatherman’s bizarro rendition…