Based On a Tired Story 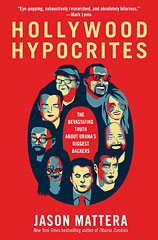 Blurb: “The same Hollywood loons who got Barack Hussein Obama elected in 2008 will do so again in 2012. That is, unless we muzzle them. Four years ago, Republicans sat back like wimps and let Obama’s celebrity-fueled cool machine steamroll them into electoral smithereens. This time, we must do the steamrolling.”

Review: “I particularly liked Mattera’s reminder that the Democratic Party was the home of the nation’s biggest racists, and the Republican Party was formed in the middle of the 19th Century to abolish slavery. Even in the 1960s, the biggest backers of civil rights legislation came from the GOP ranks, while former Ku Klux Klan members like West Virginia’s sainted Sen. Robert Byrd, a Democrat, voted against such legislation.”

Footnote: If you want to return Republicans to 1964, that’s fine by us.

I liked this book better in the original German. After all, ordinarily RW loons should *support* Hollywood, since clearly the “free market” likes it – but then they break out the “Jews control everything” crackpipe…

Deliberately unmentioned was most of the Dixiecrat racists left the Demrats and became GOPers by 1970 because of the civil rights legislation and Nixon’s “suthern” stratgery giving them the southurn block they love sooh much. Throw in Raygun’s 80s era courting of the God Squad and we have the basis of the modern GOP.

@blogenfreude: Henry the Eighth I am, I am.

Well! We’re certainly making up for a lame season, aren’t we!