A Thought At Bedtime 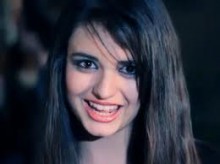 A lot of the talk has been about how pliable the Internets are.  In the space of two or three days, the aforementioned Kony 2012 video has over 38 million hits on YouTube alone.  I suppose I can take comfort in the fact that, about a year ago, Rebecca Black decided to offer “Friday” to the world and, to date, her video has only (?) 25 million hits.  (This does not count the parody videos, including the inevitable Downfall / Hitler / bunker reset of the song.  But still.)

Yet WE FUCKING KNEW THIS ALREADY.  The Arab Spring.  The rise of a possible Iranian revolution, which was brutally put down by Mahmoud Ahmedinnerjacket.  Hell, Andrew Breitbart (peace be on him in an alternate universe where he is not acting like a drunken douchebag) proved that Anthony Weiner’s junk could go around the world before reasoning and critical thinking got their pants on.  Social media is short, to the point, and an untapped well of instantaneous buzz.  [Yawn.]

But what made this video so viral, so quickly?  Damned if I know.  The answer may be that this was a marketing plan par excellence.

These guys have been at this for eight or nine years, to no success apart from the odd college info session.  [ADD: on reflection, they did generate enough momentum to get the Army to put some advisors on the ground.  Yet those guys could be back Stateside with one more budget cut.  And Kony still walks free, as we know.  So: some success, but not the result.  –Ed.]  However, over time, they built up an e-mail list, which in the last couple of weeks probably got about fifty or sixty blasts saying: “psst… March 5… YouTube… retweet and hashtag and poke and everything else, all at once.”  I can account for no other way this thing went supernova overnight.

If nothing else, these guys have proved just how devastatingly quick social networking can be.  In so doing, they’ve given the blueprint to everybody else on how to be a sensation overnight.  Which means that others will attempt to do the same thing for their pet cause.  Or their new gizmo.  Or cranberry-infused Bud Light.  (That could get tedious very, very quickly.) 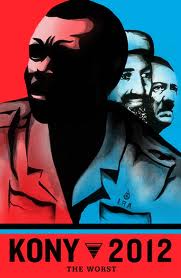 Of course, the key is to have a great hook.  And, boy, did the Kony 2012 video ever deliver on that front.  Cute kid giving a child’s answer to an adult problem.  “We should stop him,” the boy says.  (Yeah.  Saddam Hussein was also a bad guy.  And look what happened there.  But never mind.)  College kids chanting.  Public figures saying it’s now or never.

And then, the coup de grace: Hitler and a pan-and-scan of corpses at a concentration camp.  Kony 2012 went from zero to Godwin in 21:09 — a land-speed record, by my book, and done without the assistance of an argument that devolved into any sort of namecalling.  That, right there, is talent.

The snap judgment, from here, is that this has the trappings of the USS Maine incident, Soviet-era agitprop, Madison Avenue brainstorming and focus-group research, all baked into an apple pie and shipped by a particle accelerator straight into our faces at blinding speed.  Thought and reasoning and doubt are no match for a good story (true, or not), told with impressive skill, that drives home a message of earnest urgency (honest, or not).

If only this were done for a perfectly lampoonable project — Zima 2.0, for example — rather than a hideous warlord who, by rights, ought to have been practicing the backstroke in the River Styx long ago.  But you play it as it lies.

Did you know the Stinque twitter icon is still green? Years after everyone else changed theirs back? I got caught up in the last fad, and I’m not backing down.

@nojo: And you still don’t take my calls follow my tweets.

@Benedick: I didn’t even know anything about this “campaign” until now. Do I need to spend more time on the webz?

There’s a whole tumblr collecting criticisms of the group and the video.

The guy in the video is totally gay. Not that one intends value judgements on my people’s tendency towards sibilance but good God! How many esses in ‘Africa’?

Some of RML had a presentation on Invisible Children at his school last week, just before the video went viral. He and Henry Rollins got to talk about the Lord’s Resistance Army that night at the man’s show in Albuquerque.

I first heard about the LRA in a chapter on child soldiers in “The AK-47: The Weapon that Changed the Face of War” by Larry Kahaner that I read several years ago.