The Roar of the Greasepaint, the Smell of the Crowd 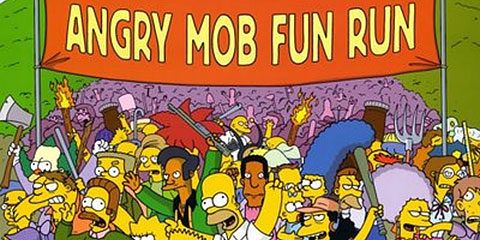 Monday night’s debate was, by most accounts, a bust. This was predictable within the first minute, when Brian Williams announced that, because he is a Network Anchor and not some cable lackey, the entire audience had been outfitted with Hannibal Lecter headgear.

The silence was deafening. And telling.

Without a ravenous crowd to rally him on, Newt Gingrich was boring. He’s a candidate who, more than most, needs a studio audience to score points. Turn off the hootin’ and hollerin’, and Newt’s just a pompous ass, not a rouser of rabble.

If, like us, you’re a fan of political theater, it’s a major bummer. But if, unlike us, you’re in charge of prepping Barack Obama for debates this fall, you can’t help but smile mischievously.

Well, besides from the thought of running against Newt in the first place.

Recall that Newt’s pitch at this point comes down to taking it to the Man. Newt’s wingnut yahoo fans are thirsting to watch their third-rate history professor shut down the second-rate Con Law professor. This is laughable on the face of it — just ask a room full of Republican congresscritters how well Obama can do without a Teleprompter — but even the fantasy of Newt embarrassing that Empty Suit for the edification of a national audience loses its fizz without sweetening the soundtrack. And the fall debates, unlike the roadshows we’ve been enjoying, will definitely be quiet.

But maybe that’s fantasy on our part. Maybe we’re now too eager for Newt to win the nomination, and ignoring the candidate who doesn’t need a cheering audience to debate. So we’ll say this about Mitt: We already knew that he gets whiny when defensive, that he becomes William H. Macy in Fargo.

And here’s what we learned last night: The same thing happens when Mitt attacks.

So, it’s all good. The day’s controversies will pass, and by the fall nobody may care about Mitt’s tax returns or Newt’s contracts. But happily for America, they’ll never be able to escape themselves.

The tell last night is that it followed America’s Funniest Videos< \i >.

Wasn’t Newter the one who made late-night bullshit speeches to an empty House? C-SPAN never panned the empty chamber. My point? I dunno. Maybe off the cuff is different, and he needs love when live, hence the polyamorous thing.

Newter: The poly thing? Ur doin it wrong.

Newt came up with so many obvious howlers that a moderately competent debater should have been able to take him to town last night. I mean, insisting that Freddie, Fannie and a host of clients with commercial interests before congress hired him as a “historian of Washington” was jaw dropping in its stupidity.

Sorry Mittens, you don’t get it. He reminds me of another hapless tool whose ambition was greater than his abilities and helped ruin a political party in the process.

I call him Paul Martin.

The one thing I’ve noticed about politics or leadership is that rich guys especially from multigenerational rich people never do either well because being smug doesn’t exactly fire up the troops. You gotta want to be a leader/make a fortune, have the eye of the Tiger if you will. The rich guys who were born rich I’ve known don’t have that. The guys who made their bundle have it spades though.

obama vs nitt gingry or mewt romrich (maybe even both if they can kiss and make up) doesn’t matter either way. only another terrorist attack or $5.00+/gallon gasoline can prevent an obama victory.

I’m still waiting for Heman Cain to re-enter the race. Otherwise, the GOP is a bust.

@Marcel Parcells: how bout some bumper sticker slogans for the fall?
neuter newt: 3 is 2 too many
mute newt
moot newt
shit on mitt
swingers for gingrich
newt swingrich
who killed osama?
M1%TT