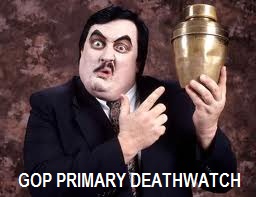 As the actress said to the bishop.

Can we please now secede?

The accompanying pic reminds me of Pegasus Theatre in Dallas, and their annual black-and-white murder mystery. It’s a visual splendor as all sets, props and makeup are in greyscale to mimic the look of ’30s film noir. The fellow above resembles the protagonist, Harry Hunsacker.

Actually, the guy in the photo is Paul Bearer — who, in the 1990s, was the “manager” for The Undertaker, a professional wrestler.

@chicago bureau: I love that picture.

@JNOV is like, Peace?: If they gave a debate, and no one watched, would it still suck?

@JNOV is like, Peace?: @Walking Still: Well, since at the last debate they all tried to outflank each other in terms of walking all over the rights of the wimminz and denouncing birth control, maybe in honor of being in the state that started the Civil War they’ll see who can condemn the 13th, 14th, and 15th Amendments first.

Andy Borowitz tweet: Watching these Republicans debate on MLK day is like going to a Mel Gibson movie on Yom Kippur. #scdebate

@JNOV is like, Peace?: Fox News, 9pm ET. I’m ignoring it, because I’ve learned everything I need to know about that crew.

@JNOV is like, Peace?: That they are doing it in South Carolina (on MLK day) just adds that extra little frisson of slavery/secessionism.

Are they holding it at Fort Sumter?

In the debate I’m not watching, Deranger Rick just demanded that Mitt show his income tax.

@nojo: Are you getting the transmission through your fillings or something?

@Walking Still: +1 They should be in black face.

Seriously, I just started watching Twin Peaks. How did I miss this show when it was on? I’ll blame the onerous hours I worked while in the military.

In the debate I’m still not watching, Mitt says he’ll think about releasing his tax records in April.

I’m so stoked for the debate, all y’all! I had enough a them pesky Yankees. Oh wait, I missed it. And I was so looking forward to it. Y’all.

Campaign pro tip: Put Mitt on the defensive. That’s when his inner Jerry Lundegaard comes out.

Reagan lines he’ll never pull off: “I paid for this microphone.”

Also: “There you go again.”

On the other hand, “Tear down this wall between investment and commercial banking” would probably work.

These stories from Gawker almost made me piss myself:

“My mother and her coffee clutch used to drag me (and all my forced playmates) to jazzercise class back in the early 80s, where they conveniently had in-house childcare. I can’t remember exactly why I hated going, but I always threw temper tantrums during the drive to. In response to the temper tantrums, my Mother would roll down every window in the car, accelerate to about 50 mph, while screaming that if she went any faster, the wind would suck me out of the car, hoist me into oncoming traffic, and then I’d get run over and die.

It took a good long while before I was comfortable driving with the windows cracked even slightly. Jazzercise….Yay!

She had a huge problem with me wildly running into the house and aggressively opening the house doors. Solution: stalk my playtime, and then, when she saw I was about to come running inside, position herself behind the door I was about to enter. As I was opening the door, she’d hit the door as loud as she could from behind, fall to the ground and play dead, causing me to panic and attempt to revive her.

As she “came to”, she would say something like “You almost killed mommy because you’re not careful opening the door. Mommy was right behind the door and the door hit mommy on the head hard. Next time mommy might not wake up.”

Did you know that the “Latest Comments” feature of Mobile Stinque on the iPhone 3 no longer works? I get a message in brackets that says: “[nojo comments]”

I had hacked the canned mobile plug-in to make Latest Comments work, but forgot to re-hack it the other day when I upgraded the plug-in. Don’t know whether I’ll have time tonight to beat some sense into it.

ADD: And, it’s back. Just had to find where I saved the hack code.

@JNOV is like, Peace?: Laura has a sister. Oh and, watch out for the dwarf!

Saw the dwarf in Special Agent Awesome’s dream. Saw the dark-haired “cousin.” Great. Thanks for the spoilers! >:/

ADD: Lemme know if something interesting happens. Pfft. <– talking about the dumbbate, not Twin Peaks.