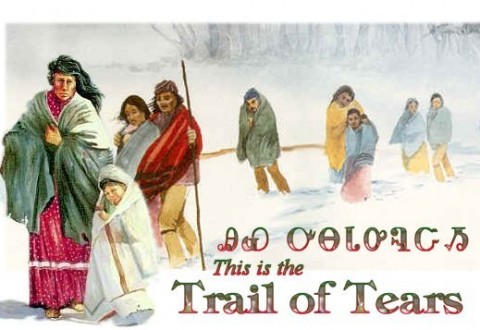 Today we shall examine two quotes, side by side. The first, from our esteemed former Speaker of the House of Representatives, and current GOP frontrunner.

Like Jefferson, Jackson, Lincoln and FDR, I would be prepared to take on the judiciary if, in fact, it did not restrict what it was doing.

-Newt Gingrich, announcing his intention to abolish the 9th Federal Circuit court for issuing decisions with which social conservatives (such as himself, presumably.. don’t laugh) disagree.

The second quote is a little less recent:

John Marshall has made his decision; let him enforce it now if he can.

–President Andrew Jackson –whose disdain for Federal Courts Gingrich admires– reacting the U.S. Supreme Court’s decision in Worcester v. Georgia (1832), that denied the Federal Government the right to evict the Cherokee people from their lands. In 1830 Congress passed the Indian Removal Act after gold deposits were discovered on the Cherokee peoples tribal lands. Though the Supreme Court ruled the law unconstitutional, Jackson ignored the ruling and the eviction proceeded apace. The removal, which ocurred at the height of winter, led to the deaths of well over 4000 Cherokee men, women and children, who were forced to undertake a death march of over 1000 miles to their new reservations in Oklahoma. The march has since come to be known as the Trail of Tears.

Imagine that… Newtie’s a spoiled brat who throws a complete temper tantrum when he doesn’t get what he wants.

Will of the people, my ass. Will of memememe.

Wikipedia (because I’m too lazy to excerpt Article III): “Article III requires the establishment of a Supreme Court and permits the Congress to create other federal courts, and place limitations on their jurisdiction. In theory, Congress could eliminate the entire federal judiciary except for the Supreme Court, although the 1st Congress established a system of lower federal courts through the Judiciary Act of 1789.” (emphasis added)

Gingrich is a fucking idiot.

@blogenfreude: Well, as you know, Article III doesn’t say that the Supreme Court can rule on the constitutionality of federal legislation. Newtie could pack the court with wingnuts who will overrule Marbury v. Madison and then spend their time on border disputes between the States.

If Newt were were elected President he wouldn’t have much use for Congress either.

See, that image above is an example of how design supports (or, in this case, undermines) messaging. The color palate and typeface choice scream “Christmas Card” to me.

According to Wapo, Newtie also wants U.S. Marshalls to drag Federal Judges before Congress to explain their heretical decisions. I can see it now:

“This week on Justified, Deputy Marshall Raylan Givens puts two Supreme Court Justices in leg irons to force them testify before the Senate Judiciary Committee on their opinions upholding the individual mandate in Obamacare.”

Viewers could then vote on whether the decisions were “justified” or “unjustified” – sort of like Judging with the Stars.

Newt sounds like he’d be a great member of Fidesz – more info on where the GOP train finally leads, courtesy of Hungary: