Stinque
Home Latest Comments Log in
If it smells, we’re on it.
Stinque
Cassandra was right.
Real America

Irene in the Catskills.

The places in this video were shot about five or six miles west of where we live. Mt Tremper was a quiet little creekside community on the way to the village of Phoenicia. It’s almost completely gone. The damage in this region is considerable. Villages have been devastated. (You’ll have to cope with the music. They mean well.)

We don’t have rivers here. They’re creeks. The creek you see raging is the Esopus. This picture was taken between Mt Tremper and Phoenicia on a sunny day in early fall. This is how it usually looks here. 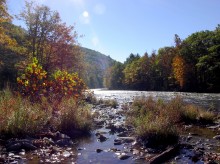 Further west is the village of Margaretville, built on the bank of the East branch of the Deleware at the confluence of a couple of creeks coming down from the reservoir to the north. The release system failed and millions of gallons were dumped on the village. We lived there when there was a freakish flash-flood about fifteen years ago. The restoration and improvements had just been completed. Following the flood, the Army Corps of Engineers installed extensive flood control barriers and embankments all along the Esopus. This was Margaretville during during Irene.

I’m posting this because I don’t think the rest of the country understands quite how bad it was here. I didn’t for a couple of days. We’re high enough to have escaped flooding. The worst we had to cope with was no power, fallen trees, and closed roads.

West of us will take years to recover. Cantor’s talk is not going down well in what are predominantly Republican districts.

There is no reservoir north of Margaretville on the East Branch. I think you are talking about the Schoharie Reservoir, but that runs north into the Schoharie Creek. Also, the reservoir’s release system did not fail, the monitoring system failed. Since they could no longer monitor the release system, the alarms went off and they evacuated Gilboa. Anyway, that had nothing to do with Margaretville.

Very moving and informative. Not to worry, however. Any delay or shortfall in recovery aid will be because the Sheriff is a ******.

@TimMallery: See the rumors here are that something failed up in Gilboa. I’ve been there but I’m never sure where it is. Margaretville’s last flood occurred when a freakishly warm heavy rain fell on a couple of feet of snow. I’ve heard there was flooding around the Pepacton reservoir, west of the village. We live above the Ashokan which released water to prepare for the heavy rain to come. People around here are saying that the same didn’t happen at the Schoharie. That water surely runs into the Esopus. It seems that every summer there are complaints about Schoharie water fouling the Esopus. Or not enough water has been released, allowing the creek to run too dry for tubing. I just drove along the Sawkill Creek which is chocolate colored and turbulent, people in the houses on the lower stretch throwing out sofas and chairs. Even the Hudson is coffee-colored from all the mud in the water. I daresay we’ll find out. Someone told me the dam had burst up at Gilboa, but I’m thinking that’s most likely not true.

The crews here always fill me with admiration for how resilient and good they are at their jobs. The roads are thick with heavy equipment, a lot of it moving west along RT 28, which is the road you can see in the videos. Given how much damage has been done I’m surprised that there’s so little being written about it. Have we heard from Howard Kurtz?

Thank you so much for posting these videos. I had no idea how bad things are for so many! The media totally lost interest when NYC wasn’t destroyed.

@Benedick: Heartbreaking, thanks for posting these.

Again I say – if you live in that area and voted for W twice, or voted to put the GOP into power at any time, you are damnably to be blamed. Eight years of Gore might have put us onto a path that would have made extreme weather less extreme. Now it is too late – we are on a path to destruction. The ghost of George Carlin is sitting in the first row, eager to watch us destroy what’s left. It’s over folks.

Gotta agree with you on that one – until “not playing well” translates into “voters think harder than GAWD-GUNZ-GHEYS” it doesn’t really count for anything. It’s WAY past time that some folks realized that the Democrats may not always be able to compensate for every infantile GOPer that gets elected…

@blogenfreude: Yeah, well, my neighbors brought down me. I didn’t do nothing. Though I must report that my fieldstone floodwater basement is now totally dry. Got a call in to the hot tree guy. Signs are up on the road heading west that all state parks are closed. Heavy trucks going up and down. Massive amounts of dirt. Worse than Catt. I blame Obama.

@al2o3cr: NY state is Republican from way back. There is NY, Woodstock, Rochester, Syracuse… the cities and/or power hamlets. But the state is as Republican as Alabama. Because the Republican party has been so good to the state. It brought us… Walmart. And… privatized jails.