Stinque
Home Latest Comments Log in
If it smells, we’re on it.
Stinque
America is a Death Cult.
Morning Sedition 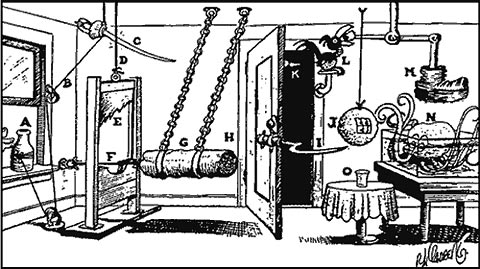 However, upon reflection and incessant reminders from all over the fucking place, we realize that we have made a mistake — an exceptional mistake — because finally, Thomas Friedman has removed the mask and revealed himself to be a Tom Tomorrow cartoon:

Thanks to a quiet political start-up that is now ready to show its hand, a viable, centrist, third presidential ticket, elected by an Internet convention, is going to emerge in 2012. I know it sounds gimmicky — an Internet convention — but an impressive group of frustrated Democrats, Republicans and independents, called Americans Elect, is really serious, and they have thought out this process well. In a few days, Americans Elect will formally submit the 1.6 million signatures it has gathered to get on the presidential ballot in California as part of its unfolding national effort to get on the ballots of all 50 states for 2012.

Yes, an “Internet convention” does sound gimmicky, unless you’re talking about Comic-Con. But more to the point, it also sounds profoundly naive — because it focuses solely on one office.

Bill Clinton, you might recall, won an electoral landslide in 1992 with only 43 percent of the vote — barely 5 points ahead of Bush I. And proto-teabagger Ross Perot’s nearly 20 million spoiler votes didn’t come from the left. Any third-party “centrist” candidate would only split the Obama vote, handing 2012 to Michele Bachmann and confirming Mayan prophecy. Now there’s a gimmick.

It may not be a recipe for failure, but it’s certainly not a recipe for success. We would suddenly live in a world of coalition government, with the ultimate leverage wielded by whoever held the deciding votes. Which, come to think of it, is the government we already have.

Even more, it smells like the government we already have, with plutocrats running the show:

“Our goal is to open up what has been an anticompetitive process to people in the middle who are unsatisfied with the choices of the two parties,” said Kahlil Byrd, the C.E.O. of Americans Elect, speaking from its swank offices, financed with some serious hedge-fund money, a stone’s throw from the White House.

This is where Friedman takes the turn towards cartoon: He’s clearly impressed by swank offices and serious hedge-fund money, where we might rush outside to vomit on the sidewalk.

But the best part is at the end, where Friedman revives our fond memories of the confident utopian predictions of early Wired:

Write it down: Americans Elect. What Amazon.com did to books, what the blogosphere did to newspapers, what the iPod did to music, what drugstore.com did to pharmacies, Americans Elect plans to do to the two-party duopoly that has dominated American political life — remove the barriers to real competition, flatten the incumbents and let the people in. Watch out.

That should take less than one Friedman Unit to resolve.

Krugman nailed the inanity of Friedman’s proposal in a recent blog post:

One of the most pernicious trends in recent American journalism is this notion that both parties simply must be equally to blame, and so both parties must be treated with equal contempt. The result is that the GOP can be as insanely reactionary, intransigent, reckless and unprincipled as they wish, resting secure in the knowledge that the Democrats will be assigned half the blame for their tactics. This “pox on both your houses” mentality is not an intellectually honest approach to the problem, it is an act of cowardice and self-delusion from commentators who would like to seem as if they’re “above it all” when, in fact, they simply have no fucking clue what “it all” actually is.

Not long ago an article was published in the New Republic that typifies this nonsense thinking. In that article the author speculated that perhaps the reason that Chicago School ecnomists Like Eugue Fama and New Keynsians like Paul Krugman were feuding over the causes of the current economic crisis was that both were wrong. While Supply Siders claim that the recession was caused by government regulation hampering supply, and Keynesians were arguing that the recession was caused by a collapse in demand, perhaps these two opposing economic camps didn’t realize that a more likely scenario is that we were actually suffering from a “Balance Sheet Recession” caused by excessive household debt.

Well, it didn’t take long for New Keynesians to point out that they had, in fact, been arguing that we were in a balance sheet recession for a long time, now, and so it was a complete mystery why the New Republic though this was a novel theory.

The “why,” of course, is easy to point out: the news media has been so trained to believe that in any political argument both sides must be equally wrong and culpable that it is simply inconceivable that one side might, actually, be correct.

@Serolf Divad: There’s the call to mainstream impartiality and then there’s taking it overboard. It’s just like when there’s any story about climate change: for the sake of “balance” they have to cart out a member of the whacko scientist in the minority who thinks it’s all a communist plot set out to destroy our God-given American right to drive Hummers and idle them while sitting in the drive thru at McDonald’s, where we’re all ordering Big Macs with a heart catheter in our grown up Happy Meals. It gives the impression that there’s more dissent against the accepted truth than there really is.

This is something the scientists I converse with at the American Association for the Advancement of Science conferences repeatedly get upset about, and get upset for good reason.

I’m surprised they’re going with an internet convention. I was listening to NPR in the car yesterday and there was a panel discussion promoting this bullshit, and one of the panelists said that the internet was the cause of problems with “outside” money. I almost crashed my car.

David Broder was parading this shit around last presidential cycle (or two) and it didn’t come to fruition. This is just something a bored columnist cooks up in his spare time when he needs to fill 800 words. It’s like they throw out everything they know about basic politics — meaning one has to build a party from the ground-up in city, county, and state elections to have any sort of influence — and think the Holy Series of Tubes might one day make it come true.

(This of course presumes that the Mustache of Understanding knows anything about politics in the first place.)

@Dodgerblue: Ignore all news until a deal’s on the table. The story’s changing by the hour.

ADD: The Beltway got all excited last week over McConnell’s plan. Which went… nowhere.

@Dodgerblue: I’m at the coffeehouse Remote Office right now, but I can imagine.

Memo to Friedman: Bernie is the American Left. Move all the Demrats in his direction, and then we can talk about centrism.

FWIW – The guys at Irregular Times are doing a great job of tracking the Americans Elect effort. Turns out it is a straight line Unity08 Redux, with the same offices, same people, and probably the same money behind them, although it is impossible to know for sure since they are a 501C4 corporation that does not need to disclose donors.

Unity08 turned out to be a Bloomberg stalking horse that rather cynically manipulated their naive acolytes – stringing them along until they could not maintain the charade any more, shut down the operation and opened a Draft Bloomberg campaign using the same office and many of the same people.

But I am sure it will be different this time with America’s Elect.

@libertarian tool: I don’t have the link, but I read a similarly informative backgrounder while writing this. It is the same money and people, and they changed their filing status to avoid disclosure requirements. Oh, and Moneybags has a Great Man fetish.

Check it out – I *finally* found an example of two things that GOPers constantly whine about (“job-killing” regulation AND religious law gone wild)!

I’d love to see a reporter buttonhole Mike “we don’t need no Constitution” Lee on exactly why his home state gets a free pass on this kind of crap.

@al2o3cr: They have a movie festival and no liquor license? How is that even possible?

As to Mike Lee – he’s beneath contempt.