The Promises of the Past 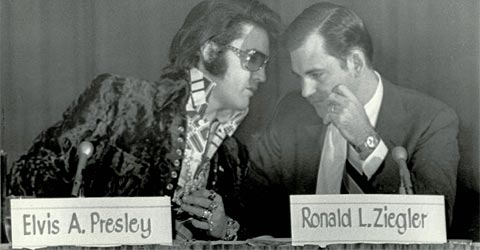 Ladies and gentlemen, the Golden Boy of American Conservatism today:

In Wisconsin and Ohio, they have decided there can no longer be two classes of citizens: one that receives rich health and pension benefits, and all the rest who are left to pay for them.

Democrat or Republican, it doesn’t matter. We are all facing the same problems. These problems are bigger than either political party. The promises of the past are too expensive, and the prospects of the future are too important to stay on the old, failed course.

That would be Chris Christie, giving his budget address in New Jersey on Tuesday.

The first thing you’ll notice is that a Republican is waging class war, something which apparently is permitted so long as the class doesn’t include the wealthiest two percent of Americans. (If you want to be precise, it’s really divide-and-conquer, couched in resentful rhetoric.)

But here’s the line that’s really gnawing at us:

The promises of the past are too expensive.

In one respect, there’s nothing notable about this — “Hey, we’ve run into some problems, can we renegotiate our agreement?” — and if we put our mind to it, we could probably come up with some sufficiently elegant way to express it.

But whatever we came up with, it wouldn’t start like this…

The promises of the past…

…because that suggests something deeply uncomfortable: that promises have a shelf life.

Promises, that is, made by the speaker.

This is America, after all, where A Man is Only as Good as His Word. All promises are “promises of the past”, offered to be redeemed in the future. If you can’t trust that the promise will be redeemed, then it isn’t a promise.

We’re old enough to remember old-school conservatism, the conservatism of Character, of Responsibility, of musty personal ethics that got in the way of having deviant fun. Clearly this isn’t a burden on Modern Conservatism, whose leading exponent sees no issue with breaking promises because they’ve suddenly become inconvenient. A leader of what once was the party of Moral Rectitude is now freely admitting — heck, even celebrating — that Promises are Made to be Broken.

So Chris Christie isn’t A Man of His Word. You got a problem with that?

The tax cuts of the 2% richest/eelightist outweigh the needs of the many.

Is he giving up HIS benefits? The ones paid for by the citizens of NJ?

Thought for the day: Why is Christopher Hitchens such a raging asshole?

@Benedick: Has this bled over into Pennsylvania yet? I’m afraid to look – but I know from experience that there are a lot of corrections officers and state patrolmen and women who will stand pretty damn firm before their governor takes away their benefits.

Promises made to unionized workers can be broken. He’s not the first to pull this stunt — remember the airline bankruptcies that allowed management to tear up union contracts.

Speaking of Elvis, I saw a tee-shirt in Provincetown that said, “Elvis is alive and living in my pants. Feel him for a quarter.”

In other breaking news: I have just become an ordained minister in the First Church of Atheism and am now available for all your birth/death/marriage needs. Reasonable fees apply. Having played priests in the past I was, per union rules, qualified to conduct marriages but only while said play was running. Now I can marry all my friends ALL the time. I am SO Right Reverend.

@karen marie has her eyes tight shut: I want one.

@Benedick: Not to mention the SwissAir stewardesses flight attendants.

@Nabisco: Not sure if it’s in Pennsyltucky yet, but at least in Wisconsin Walker has said that he would explicitly exempt firefighters, highway patrol and prison guards from his union-busting. I’m sure it has nothing to do with those predominately white, male and Republican unions supporting him in the election. Nevermind that these so-called “public safety” unions are the ones who suck at the state’s teat the most (starting salary for a California prison guard with a G.E.D. or H.S. diploma? $85 K plus OT). Let the unions for the teachers, home health aides and administrative assistants (gee, overwhelmingly female and in certain parts of Wisconsin, African-American), who are already paid less in relation to the public safety unions, take the hit for the $200K/year pensions paid to 52 year old retired cops.

I’m trying really hard to not get into pitting one group against the other, but this detail/subplot of Walker’s plan has not received much attention and it really drives me batty for multiple reasons. And I haven’t seen the exempt public safety unions speaking up for their brethren who are getting screwed.

@Dodgerblue: Mr. SFL is a big fan of the Singapore Airlines flight attendants. I agree that whether male or female, they are attractive.

@SanFranLefty: I agree that whether male or female, they are attractive. Careful. You’ll inflame Catt.

I read somewhere that the cops, etc, in WI have joined the protests. But yes, of course that’s the reason Walker exempted them. And of course all public discussion is based on their levels of pay/benefits and not those of the teachers.

you know its really not even the wealthiest two percent.
check out these charts via Kevin Drum. if you scroll down to the line graphs you will note that the top line, the one that is so high it leaves the graph without pixels to even put bumps in the lower ones, is actually the wealthiest ONE percent.

@SanFranLefty: I’d forgotten that they have separate unions, and of course a guv’nor would protect the public safety ones while cutting loose the mostly wimmins and/or working- with-the-poors ones. During my days on the state beat, as the tedium drove me to drinkStinque, I was privy to countless bitch sessions about those pesky unions – and that was a Demrat administration.

Class warfare it is, then.

Oh and, another vote for Singapore air hostesses. Especially in bidness class, which I was fortunate to take once to (waits a beat) Bali. We had a perfectly miserable encounter with United flying international long haul when la Bisqueta accidentally got some crayon on her tray table. I was threatened by the waitress in the sky to be charged for what she declared was “damage” to airline property. In a perfectly polite but firm manner, I asked her not to take out her anger about the loss of her pension on us, who were just trying to get from point A to point B.

The crayon marks came out with a little bit of vodka and some elbow grease.

@Capt Howdy: As a newly ordained minister I find it right and fitting that the rich get richer. As a wealthy man, Jesus had to struggle against the trade unions of His day that wanted to destroy Him. However, thanks to prudent estate planning He was able to protect His capital to launch Vatican LLC, the premier investment instrument of all time.

@Right Reverend Benedick: But of course there’s been not a peep about rolling back Wisconsin legislators’ pension benefits.

I hardly think a group with this kind of work schedule should be bitching about teachers having the summer “off.”

@Nabisco: When properly applied, vodka will erase most stains.

@SanFranLefty: Oh, Walker is speaking loud and clear on this issue. He wants the guys with the guns to feel OK about emptying clips into the crowd of ‘terrorists’ and he wants the unions to know he already bought their allegiance and their firepower. I am sure the RNC leadership is on the phone with him every hour demanding he simply open fire and provoke a confrontation with the Obama Administration that they can exploit and amplify through Fox News to force Obama to choose between activating the National Guard or worse (and subsequently be battered by accusations of fascism) or to back down (to be battered by accusations of being cowed by fascists), either way winning one for satan in further destablization of domestics politics and Obama’s administration.

As a man of the cloth I cannot condone violence of any kind unless it’s aimed at Democrats.

@karen marie has her eyes tight shut:
Exactly. Doofus pretty much unveiled what he’s going to do. A joke turned serious with serious consequences.

@FlyingChainSaw: The A Deputy Attorney General of Indiana thinks live ammo should be used against the union protesters.

@SanFranLefty: Don’t know about the others, but the firefighters’ union in Wisconsin has shown up at the protests to support the teachers.

@Mistress Cynica: Glad to hear that.

I love how that douchenozzle has the balls to whine about “enviro-Nazis” while proposing the sort of shit (breaking unions with live ammo) that Hitler and company would totally have approved of.

I know, I know, but you left the apple right there, hanging SO low…

@Tommmcatt is with Karin Marie on This One: He’s an Englishman. Why do you think I don’t live there?

@karen marie has her eyes tight shut: I miss Provencetown. I want my ashes to be scattered there….and no, Benedick, not by dick dock. Get your mind out of the gutter.