Stinque
Home Latest Comments Log in
If it smells, we’re on it.
Stinque
Cassandra was right.
Food, Stinque Recipe Challenge

Today it’s Gordon Ramsay’s Glazed Ham with pear and tomato chutney.  He’s something of an asshole, but his recipes work. I don’t have a written recipe, so the amounts are estimated. You can watch him do the ham about 1:50 in:

So here are the ingredients: 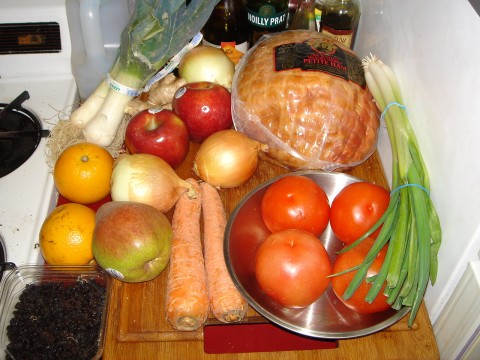 And here is the ham in with water, 2 medium onions, 3 leeks, 2 carrots, 4 bay leaves, 3 cinnamon sticks, and crushed pepper and coriander. Mine is bigger than Gordon’s (!) so I’ll simmer it about 3 hours. 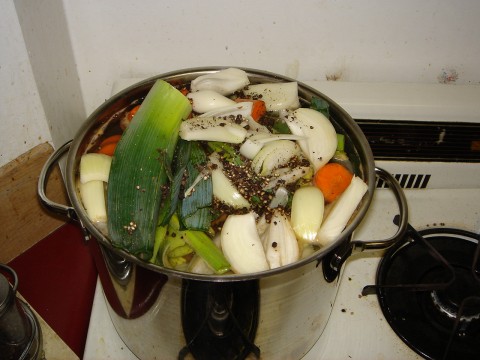 So here are the onions (I threw in some scallion tops I had left over) in olive oil, then I added about 1 tsp fresh grated ginger, cooked it, 1/2 tsp fresh grated nutmeg, cooked it, then tsp cinnamon and 1/2 tsp cayenne (Gordon says 1 tsp, but I figure you can add more later) and cooked it like a curry over low heat – it was rather pastelike.  At this point I added about 1/4 cup madeira, forgetting entirely that the madeira was for the ham glaze.  But how could it hurt? 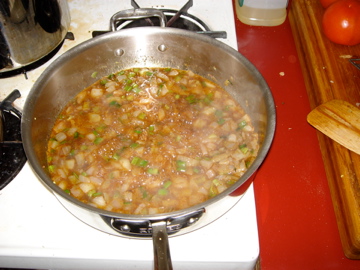 Then in went about a half cup of brown sugar, about 2 tbsp of rice vinegar (didn’t have the white wine vingar called for) then 2 diced pears and 1 diced cooking apple (forget what kind): 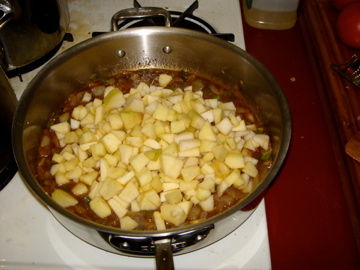 Here’s the whole thing after about 5 minutes of cooking and the addition of currants (I don’t know what sultanas are, and I figured currants were plenty Christmasy): 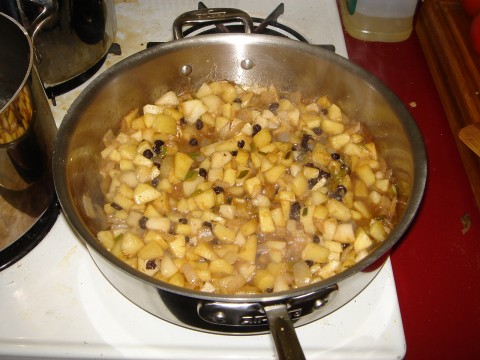 I mistakenly added one of the tomatoes (I used 3) before I cooked it down for 15 minutes, and unlike Chef Ramsay, I made a concassé – skinned (by dropping briefly in boiling water) seeded, and chopped tomatoes. Here’s the whole thing all together: 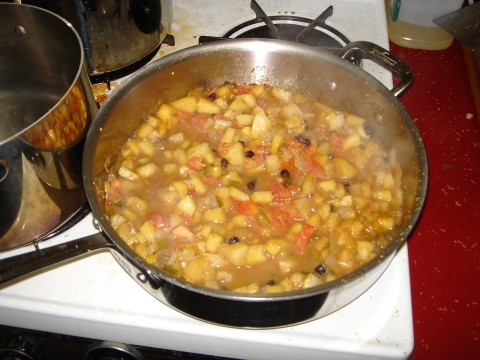 And here is the whole mess on the stove: 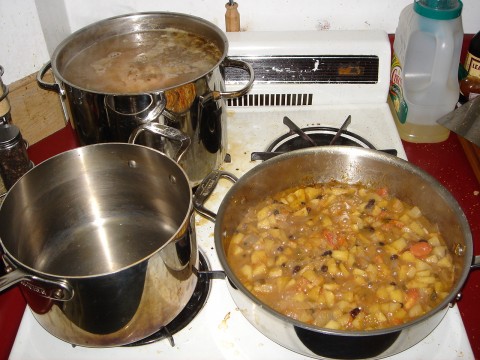 So here’s the chutney with all the tomatoes in, nearly done – Ramsay took it off heat, as far as I can tell, right after he added the tomatoes – I made another ‘mistake’ and cooked it down for 10 minutes.  But it tastes amazing – a bit of heat after a sweet, light, slightly sour flavor.  Can’t wait for the ham … speaking of which: 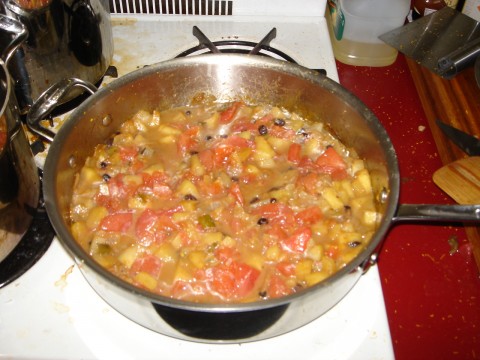 So I managed to knock the fat off one side of this once-noble piece of pork – I won’t bore with the details of my klutziness. So I stuck cloves in the good side, and it’s ready to go in the oven.  Glazing next – stay tuned. 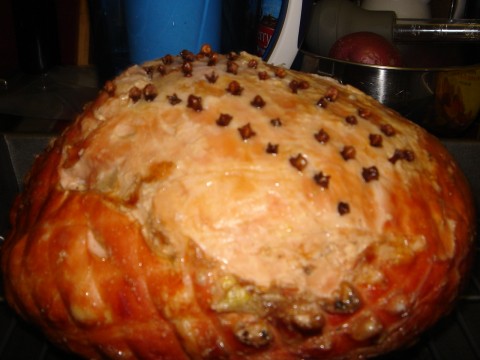 And this is the brown sugar melting in the madeira (for the glaze): 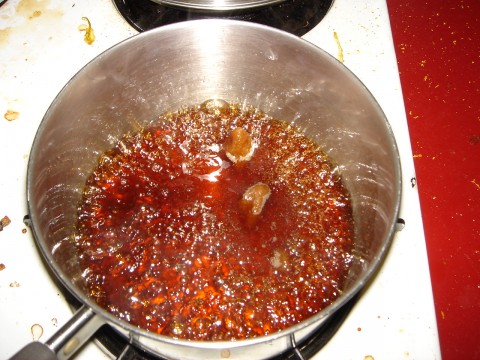 And here’s the glaze with the honey in: 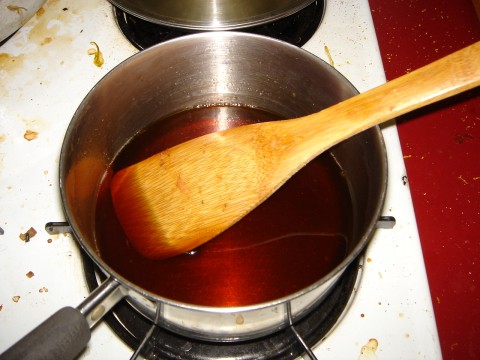 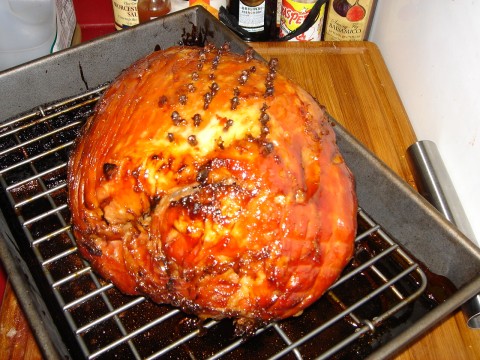 Darling, everyone’s is bigger than Gordon’s.

As an accompaniment to ham, instead of just straight mustard, I mix a bit of Dijon into sour cream to taste. It’s creamy and delicious.

I was craving turkey this last week, so planned to roast a turkey breast, do my jalapeno cornbread dressing, homemade cranberry sauce, etc. My ambition has steadily declined–first the dressing was abandoned for a root vegetable gratin, and now I’ve decided fuck it, I’m just making mashed potatoes and green beans. I’ll save what little energy (and oven space) I have for the ginger-pear upside down cake. Never skimp on booze or dessert, that’s my motto.

@Mistress Cynica: If you’re feeling a little ambitious, you could do twice-baked potatoes.

@Mistress Cynica:
there was a short lived terrific show (it may just be on hiatus) on A&E called “the big C” the luminous laura linney plays a woman diagnosed with terminal cancer. she doesn’t tell anyone, just goes nuts. your comment was from a hilarious scene where she’s in a restaurant with her husband, the always amusing oliver platt. she says to the waiter, “i’ll just be having desserts and alcohol”

/you have your priorities straight

@blogenfreude:
your splattered stove top begs me to tell you 4 words:
Mr. Clean Magic Eraser
prepare to be amazed!

@baked: Baked, “The Big C” is a 2010 Showtime series that spun off from “Weeds”. I guess it’s possible A&E has carried episodes. Anyway, it did very well in the ratings for Showtime and the second season will air in 2011, so there’s more to come.

I only had the chance to see one episode during a free Showtime preview weekend. Same with “Dexter”.

@Benedick: Back away from the spotted dick.

@Dave H: A Weeds spinoff? Who’s in it (DERP Besides Laura Linney)? That older Botwin is über hot.

@baked: My wonderful girlfriend cleaned the stove using magic Japanese sponges … and if you’re in town, come for leftovers.

@JNOV: In college we went to the Peace A Pizza in Rosemont (the one with Hope’s) all the time.

@mellbell: HOPE’S! :-) We didn’t make it to Peace today. We’ll have to go to the one in Rosemont once the roads are under control.