Stinque
Home Latest Comments Log in
If it smells, we’re on it.
Stinque
Mastodon: @stinque@mas.to
Assholes

As If the DMV Weren’t Hellish Enough 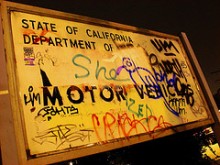 A San Francisco transgendered woman has filed a damages claim against the California DMV after a clerk at my local office told her when she was trying to change her name and gender on her driver’s license in October that she was going to go to hell for her acts of homosexuality.

Oh, and then he sent a threatening letter to her home four days later begging her not to change her gender, and gave her address to a wackadoodle church that sent her DVDs warning of eternal damnation for homosexuality.

The punchline? He’s been suspended with pay since October.

The second punchline? This is the second time he’s done this in two years.

SanFranLefty
5:49 pm • Saturday • December 11, 2010
comment »
Choose Your Delusion
Yes, Mr. President, It Is the Public Option All Over Again The Gift That Keeps On Living Dead
30 Comments
Dodgerblue

With pay? What do you have to do at DMV to get fired? Run over someone in the parking lot?

Nice use of the subjunctive in the title, btw.

As if anyone needs further proof that the English are not to be trusted I give you the Idiot Clog Dance of Sowerby Bridge.

Don’t fear… we in the private sector have a similar plan if only for the “best and brightest.” One of my former execubots (moran was in charge of the division I worked for) attacked a woman in a parking lot after she honked when HE cut her off. Was suspended with pay even though legal said he should have been suspended without pay.

Our senior lawyer quit in disgust and the execubot was so hated that he had to be transferred to another division three months later because no one did what he said as everyone was disgusted by him.

All he got was a fine and community service because he was “important.”

True story: in my attempts to clear my title before buying a new car, I have made FIVE visits to the Illinois Secretary of State’s office. They told me I needed to do this — I did and returned — they told me I needed to do that. Repeat four times. Last visit today and I am told that I will get my clear title in two weeks or less. Maybe. During said trip, my transaction was interrupted by a second staffer commenting about the new press-on nails she gave her five year old daughter, and the controversy that ensued in the household.

@Dodgerblue: I’m a big fan of the subjunctive tense. No shit, a paid vacation for two months? Shit like this is not helping the cause of the state workers. Maybe he should be forced to clean the toilets and to scrub the graffiti off of the signs around the building (I have half a mind to go down there with a can of paint, it’s been driving me crazy for about a year).

It is of course a well known fact that a lot of traditional dance sides have fools; and normally only one of them. Here in Sowerby Bridge we have three, not fools but, idiots. The first section of the dance is comprised of attempting to stamp on the nearest foot whilst circulating in both clockwise and anti-clockwise directions. The traditional Sowerby Bridge idiot felt no pain, so whereas the more sensible traditional sides try to avoid stamping on each others feet here there is a deliberate attempt to do just that.

The second and third parts of the dance are more difficult to explain. We believe that the second part goes back to the time when idiots often failed to go to work and consequently needed a good kick up the arse to do so. Hopping was an important past-time. The best beers have been brewed in Yorkshire since the discovery of good ale and we believe the third and final part is a celebration of good hopping.

Were they sober? Otherwise, there’s no excuse for that display of whatverthefuckitis. ETA: Oh. Hopping! I’m all for that!

We have a privatized DMV here in New Mexico. I gladly pay the premium fees to avoid most of a half day in hell. I don’t even know where my actual local DMV office is. Friend of mine was Taxation and Revenue Secretary for a while, which includes the DMV here. Pissed her off when I said I went to the private operation and had to listen to her try to say how much better the DMV was getting. Other people drive to little towns an half an hour or an hour away to go to an office without a massive wait and better personnel.

@SanFranLefty: I have a client whose top administrator can’t make a personnel decision without fucking it up, so he puts people on admin leave with pay for months as he hopes the federal agency that funds his school gets rid of his bad employees for him. Going there Monday as part of a Navajoland road trip to pull the trigger on a couple of people for him and to serve as a hearing officer for the Navajo Nation on an employment matter.

@Benedick: It was upon my visit to England in 1978 that I learned Monty Python was a documentary.

Speaking of Upper Class Twits, I give you Nassau County teabaggers find out that deficits DO matter

A micro-scale version of the national-scale idiocy we’re about to witness, I suspect.

@nojo: Ha! When I was watching the video, I thought it was a MP skit.

@ManchuCandidate: Render unto Caesar that which is Caesar’s…

TJ: Talibunny visits Haiti to pray for people. The AP reporter (only Fox is allowed to cover her trip) snarkily noted she was wearing designer sunglasses while meeting the locals.

@JNOV: The piece I’m working on has sections that look suspiciously like this. Quite coincidentally. I imagine properly performed it could get pretty rowdy. These guys are a bit too good-natured. Or perhaps not. The English are nothing if not nice.

@nojo: Damn. I missed you. I could have slapped you with a haddock.

@Benedick: I hope your dudes are able to keep a basic accordion beat whilst ringing around the plague rosey I tried to give them a pass because of all the fellow foot stomping (that takes coordination), but that display was just pitiful. And get them some scorpion killers if they really wanna kick arse.

@Benedick: I’d like to be slapped with a haddock. I’m guessing this haddock slapping club is only open to dudes.

@Benedick: Oh, pish. Those Brits don’t get Slap Happy like these dudes.

@JNOV: That’s not so far from ‘patting juba’. Different rhythms. And the original fierceness has been folklorified into silliness. Clog dancing, properly done, looks grim and rather scary. And I always think it’s interesting to see men do work and agro dances together. I’m using jigs and quasi morris dancing, which look back to the 13th, 12th cents and are still with us, in a comedy about dying. We’ll see how that works out.

@Benedick: We visited a small village church where somebody was jerking off at the gate. Was that you?

McCartney segues from Day in the Life to Give Peace a Chance, thereby ruining two decades at once.

@Benedick: Interesting. I Googled “patting juba,” and apparently it’s related to black Greek step shows. I used to live at those things, and when I was little, my cousins and I used to stomp/cheer in the street. I’m looking for some decent video of the Kappas doing their thing with canes (no music — just stomping, a lot of cane work). The best routines have no music besides what they make with their bodies and canes. Sadly, most of the video available is crap.

@Benedick: Okay. This is pretty good. There’s one bit of recorded music, but it’s short and shows some decent cane passing. Not sure what the wigs and masks are about…Frankenstein’s monster? ETA: Jabbawock? Related: JabbaWockeeZ.

I wanted to be a Delta so I could step with a staff or whatever they call that stick thing they use. Memory fails. ETA: Memory really fails. I think the Sweethearts (little sisters to the Kappas) had the sticks. Whatever. But after I was on line to be a Kappa Sweetheart, I was like, this is dumb. The stepping wasn’t dumb; the other bullshit was. Thus ended my exploration of Greek life. Still love step shows.

@JNOV: I know Patting Juba as something different to step-dancing in which the body is used as an accompaniment to chants or songs, or used alone, with noises produced by smacking, patting, etc, face, chest, head, etc. It was very important in the slavery days. As was the rhythmic chanting of words made to rhyme which is the forebear of rap. Add step-dancing to the mix and you have an important aspect of American history which, since it isn’t written down, is largely devalued and ignored. I think it’s an epic story of people holding on to their own idea of who they are in the face of intolerable circumstances. The guys are fascinating in the video. What they’re doing has very little to do with the European tradition which is all tits up. They’re dancing with their shoulders low and rounded, with the centre of gravity held very low in the body, no trace of ballon.

@nojo: I wouldn’t have been jerking off outside the church.