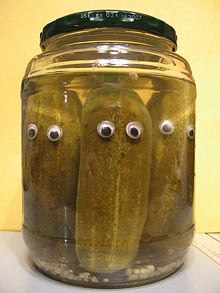 We were going to ignore this, but after a Stinquer tip and seeing it turn into a Twitter meme, we realized we have an editorial responsibility to clue you in:

George W. Bush’s pro-life stance solidified when he was a teenager in Texas — after his mother suffered a devastating miscarriage and showed him the fetus in a jar, the former president said in an extraordinary interview that airs tonight.

“She said to her teenage kid, ‘Here’s the fetus,'” the shockingly candid Bush told NBC’s Matt Lauer, gesturing as if he were holding the jar during the TV chat, a DVD of which The Post exclusively obtained.

I put even odds on her still having the jar.

@SanFranLefty: This explains the drinking.

You don’t want to figure out Babs. Some mysteries are best left unexplained.

I put even odds on Steelers-Bungles pulling in more eyeballs than “Shrub: the Confessional (now in Soft Focus)”.

Um. Did she just happen to have a jar handy when she miscarried? Was she planning on starting her very own Mütter Museum? Or did the doctor give her the fetus in a jar to take home?

I call bullshit on this story.

Clicked through the link, and I still call bullshit on this story. Without going into graphic detail, let’s just say this doesn’t make sense on many levels. I’d like to know what trimester she was in. The doctor couldn’t determine the sex, (“a little brother or sister…”) so we’re talking first trimester at most. A first trimester fetus as seen on ultrasound doesn’t look much like a first trimester miscarried fetus. This is total BS.

I thought this story sounded familiar, then I remembered and then I blacked out : The Santorum Fetus

@JNOV: Call BS on Shrub — it’s his anecdote. And since the source is Murdoch’s Post, I think we can accept the transcription as valid. Even if they wanted to embarrass NBC, it’s Their Man being interviewed.

@JNOV: Besides the fact that a first trimester fetus (spontaneously aborted or not) is not even an inch long at week 9, per the Mayo Clinic. Bullshit.

Mr. SFL’s take: “They should have kept it. A fetus in a jar probably couldn’t have screwed up the country anymore than Shrub did.”

@nojo: I’m pretty sure the BS-calling is directed at Shrub. That’s where I’m directing my “BULLSHIT” – someone should ask a follow up question about how big it was, etc. Those two have a FUCKED.UP. relationship, if you’ve ever read anything about it…

@texrednface: As much as I hate Santorum, and as solidly prochoice as I am, I don’t find it odd for people to photograph and spend as much time as they need to spend with (back to medical terminology) spontaneously aborted fetuses. These would have been their children — they became real people in their would-have-been parents’ minds once the pregnancy test was positive.

For me, that’s what choice means. The choice to terminate or continue a pregnancy is based on whether you consider the fetus a child or a potential child. And even if you consider a fetus to be one and not the other, you still may choose to see the pregnancy through or to have a therapeutic abortion contrary to your thoughts or feelings prior to the pregnancy.

In the mid ’90s, I worked with preemies as young as 23 weeks gestational age, and I rooted for them. Few made it, and those who did often suffered brain damage, were blind, deaf or all the above. I watched a lot of them deteriorate as I scanned their brains for bleeds, but I still rooted for them. And I support late-term therapeutic abortions despite rooting for preemies.

Maybe she was saying “feces” and not “fetus” and just showed him a turd?

@SanFranLefty: Yeah. Via ultrasound, a six-week fetus is a fetal pole. You try to determine the crown and the rump and take a crown-to-rump length measurement to try to determine gestational age. You should see a heartbeat and a yolk sack. All this is done with an endovaginal probe.

Maaaaybe you see the formation of limb buds around 7-8 weeks gestational age, usually by 8 weeks. 8 weeks is usually the earliest you can see a fetus transabdominally in a woman with a body habitus within the range of a healthy BMI.

The best time to have an ultrasound is around 16 weeks gestational age. The fetus isn’t crammed in there, and you can look to see if the heart has four chambers, if the spine is covered with skin (no spina bifida), you get a good look at the brain, the stomach, the bladder, the location of the placenta, AND you can usually see the sex. People want to shoot you if you can’t see the sex. I’d be thinking, “Yeah, but I can see that the heart is contained in the chest. That’s a good thing, right?”

@nojo and Lefty: Yes, at Shrub.

If only we’d known this earlier, and had a jar big enough to put a dead Iraqi child in…

Seriously: the thought of this fuck getting all weepy over a never-alive “baby” while killing HUNDREDS OF THOUSANDS makes me want to puke.

@JNOV: Ah. I’ve been very sensitive about sources the past few days…

@SanFranLefty: She coulda just handed him a mirror.

@JNOV: I appreciate and understand the feelings of families who have lost their children. It is a deeply personal choice. What I find twisted is Rick Santorum’s need to use his spontaneously aborted child to drive his point. Just as twisted as Bush’s ridiculous story.

@texrednface: We’re on the same page. I definitely agree that he was trying to score political points from a personal tragedy; politicians do it all the time.

What makes the Santorum story odious is that he exploited a personal tragedy not only for political gain but to also impinge on the legal rights of others.

Whenever I see an abortion protester, I tell them, “Abortion is legal,” and go about my business.

Meh. Now that I can stream (HUZZAH!), I’m going to watch some truly gross stuff on Fringe.

@Benedick: Do you also know John Noble? I’m in love with him.

But “the purpose of the story wasn’t to try show the evolution of a pro-life point of view,” Bush insisted to Lauer.

“It was really to show how my mom and I developed a relationship.”

He didn’t say it was a good relationship. But it’s hard to imagine she would bother to mention, especially to him, having a miscarriage given that when his sister died, he hadn’t even been told she was sick, and in lieu of having a funeral his mother opted for a round of golf.

@karen marie wants to know — Fucking integrity, how does it work?: Yeah, forget about the Oedipal complex leading to war in Iraq, many a PhD psych dissertation could be devoted to that mother-son dynamic.

@karen marie wants to know — Fucking integrity, how does it work?: For all her other faults, Barbara Bush has always been pro-choice, so I don’t see her trying to traumatize Dubya into being pro-life.
And not to be the Barbara defender here by any means (a friend and I have always called her “Livia“), but the reaction to their daughter’s death is classic High WASP. Nothing better for grief than physical activity. No point wallowing. Never cry or display grief at a funeral–it’s tacky. Classic example: Prince Philip taking Diana’s sons hunting the morning after her death.

What sticks in my craw about the interview and book was the bit about Bush not pardoning Scooter and pissing off Cheney:

Bush writes in his upcoming autobiography that Cheney was angered by the decision, telling the president, “I can’t believe you’re going to leave a soldier on the battlefield.”

Just shows you what a manipulative prick he was, if there was any question, which there isn’t.

I’d buy his book if shrub responded – “Listen you gutless fuck. If you gave a rat’s ass about Scooter you could have walked into that courtroom like a man and told that jury that Scooter was lying to protect your fat ass at your specific instructions. You threw that soldier on a grenade that was meant for you, and now you want me to drag his sorry ass off the battlefield? Get the fuck out of my office.”

At the end of the interview, Matt Lauer pulled out a .45 and emptied a clip into Dumbya’s smug face, at long last delivering justice for millions either dead or ruined after his Reign of Terrah.

Oh that didn’t actually happen? People are still busy licking his boots? Fuck this country then.

@¡Andrew!:
Let us know how that Secret Service interview goes.

Hey I didn’t say I’d do anything like that. I’m perfectly harmless, unfortunately.*

*Unless sarcasm, sighing, and eyeball rolling are now considered weapons by our SS, in which case I’m a turbo-ninja.

@libertarian tool: @¡Andrew!: Oh, great. I get the DMCA paperwork sent, and now I’ll have to deal with Feds showing up at my door demanding that I divulge identities.

How much of a fight would I put up? Depends on how much publicity I could get out of it.

@nojo: Oh they’ve already got a full schedule of infiltrating peace groups, kicking down the doors of middle-aged medical marijuana users, and deporting housekeepers for transposing two digits on their I-9s. The usual saving the KKKountry from terrahists stuff. No te preocupes.

And I’m a honkey, so by the (In)Justice Department’s definition it’s impossible for me to commit thoughtcrime.