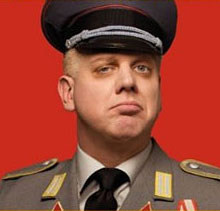 Our afternoon guest columnist is Drummond Pike, CEO and founder of the Tides Foundation.

I am writing to ask your company to take a simple step that may well save lives in the future. And it is not unimportant that taking this action will remove your company and its products from any connection to what could very likely be an unpleasant tragedy, should things remain as they are today. On behalf of my organization, and many others like it, I ask that you cease advertising on the Fox News Channel.

This is neither a hollow request, nor one rhetorically made. There is an urgency to it born of our own direct experience as the target of a would-be assassin inspired by Fox’s Glenn Beck Show.

On July 19th of this year, I arrived at our San Francisco office to learn that a misguided person carrying numerous guns and body armor had been on his way to start a “revolution” by murdering my colleagues and me. The Oakland Police Department called to tell us that, following a 12 minute shootout with the California Highway Patrol, law enforcement officials arrested an assailant who had targeted the Tides Foundation, an organization which I founded and currently serve as CEO, and the ACLU for violence. To say we were “shocked” does not adequately describe our reaction. Imagine, for a moment, that you were us and, had it not been for a sharp eyed highway patrolman, a heavily armed man in full body armor would have made it to your office with the intent to kill you and your colleagues. His motive? Apparently, it was because the charitable, nonpartisan programs we run are deemed part of a conspiracy to undermine America and the capitalist system, which is hogwash.

Although not a political organization, the Tides Foundation has been a frequent target of misinformation, propaganda, and outright lies by Fox News’ Glenn Beck. Since his arrival at Fox in early 2009, Beck has repeatedly vilified Tides, suggesting we are intent on “creat[ing] a mass organization to seize power.” He accuses the foundation of indoctrination and says we are “involved in some of the nastiest of the nasty.” Beck tells viewers that Tides has “funneled” money to “some of the most extreme groups on the left” and that our mission is to “warp your children’s brains and make sure they know how evil capitalism is.” In total, prior to the attempted rampage, Beck had attacked the Tides Foundation 29 times. On September 28th, more than a month after the shooting, Beck reiterated his focus on the Tides Foundation, warning, “I’m coming for you.” In jailhouse interviews, the gunman confessed he views Beck as a “schoolteacher” who “blew my mind.” My would-be killer admitted that Beck “give[s] you every ounce of evidence you could possibly need” to commit violence.

Beck is a self-described “Progressive Hunter” who relies on violent rhetoric. Do you really think that the millions of Americans who describe themselves as “progressive” need to be “hunted down”? If so, to what end?…

The next “assassin” may succeed, and if so, there will be blood on many hands. The choice is yours. Please join my call to do the right thing in this regard and put Fox News at arm’s length from your company by halting your advertising with them.

Mike Lee. Asswipe of the world.

@nojo: I know. Where are the standards nowadays?

He looks a bit cartoonish. And–helllloooooo–no kahk shots? No wonder TIME is circling the drain.

@¡Andrew!: Dammit, Man! I’ve been sporting that certain shirt we have in common (Jr has one, too), and now I try to register “¿JNOV? (Shaddup, ¡Andrew!)” but WordPress won’t let me. Yes, I’m totally trying to SWF you, but you have intertubez protection or some such. >:/

@JNOV sing sin: If this helps, I just copied and pasted the inverted exclamation point into a new profile thingy. I still sign-on under my old “OA” log-in. For all other inquiries, I’ll have to refer you to Ceiling Hamster. ¡Praise!

@¡Andrew!: Heh. Seriously. Like the Tea Party doesn’t have any head shots.

Not until I get paid an NFL salary.

Is it too soon to talk about Caprica? I knew Sister Clarice’s revenge would be Biblical, but holy focke I never thought she’d go all Freddy Krueger in a splatterfest. Sweet Zeus.

@¡Andrew!: I know how to do it through key strokes. I think WP just doesn’t like the ¿ in a user name.

@nojo and @¡Andrew!: : I think Mike Lee should put one on a billboard. Then maybe we could see it.

@¡Andrew!: Wha-wha-whaaaaa? Didn’t know they were back. I have some catching up to do.

@nojo: We’re a couple of eps in now. All my teevee comes off the intertubes, so I’m usually in a daze and I never know when shows are actually on.

Regarding the new season, let’s just say that Barnabas shouldn’t bother refinancing his mortgage. Sister C is almost as mad as I was when ABC cancelled Eastwick.

@¡Andrew!: Okay, where were we? Oh, yes. Convenient way to trim the cast budget.